The Exploration of Computation 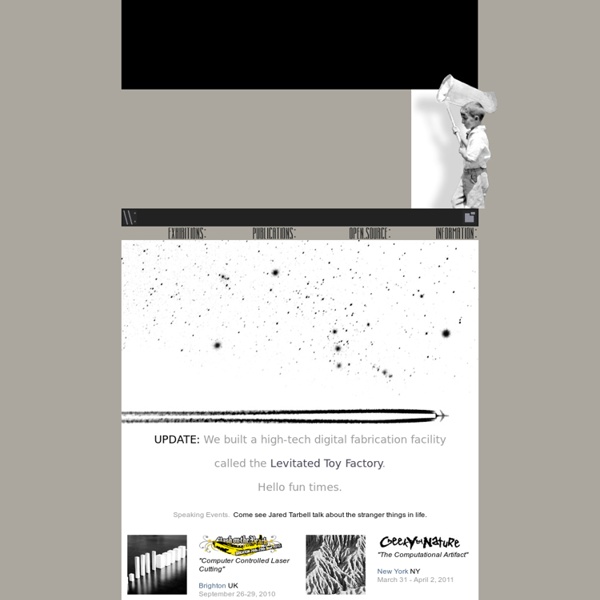 Huge Model of Isengard From Over 22000 LEGOs Master LEGO building team OneLUG have completed their incredible model of the Battle of Isengard, a key battle in The Lord of the Rings: The Two Towers. The model includes a whopping seven-foot tall Orthanc tower, dozens of ents, over a hundred orcs, and two small hobbits. Built to minifig scale, the entire tableau weighs 145 pounds, and uses 22,000 LEGO bricks across its eight-foot diameter.

Artport Commissions: {Software} Structure » Open Software Structures » Open text about the project by Casey Reas The catalyst for this project is the work of Sol LeWitt, specifically his wall drawings. I had a simple question: "Is the history of conceptual art relevant to the idea of software as art?" I began to answer the question by implementing three of Lewitt's drawings in software and then making modifications.

David Bihanic This map (that renews the choropleth model) depicts France’s digital pollution — what I mean by digital pollution is the combination of several forms of pollution linked to the digital revolution: the particulate matter pollution from silicon production and processing, the adverse effects of electromagnetic fields (GSM, UMTS, WiFi, WiMAX, etc.) on health and the environment, the excessive carbon dioxide emissions of datacenters (caused by, among other things, their massive electrical energy consumption), as well as the high greenhouse-effect gases emissions from the incineration of toxic e-waste (almost 2 million tons of WEEE every year). Few key figures below which help to grasp the current situation: (Click to enlarge image) This infographics was designed by David Bihanic (2015). Copyright ©2016 David Bihanic - All rights Reserved.

Dani Lischinski - Home Page My areas of interest span a wide variety of topics in the fields of computer graphics, visualization, virtual reality, and image and video processing. In the past, I have worked on algorithms for photorealistic image synthesis, simulation of global illumination, interactive visualization of complex virtual scenes, computer-generated illustration, facial animation, image-based modeling and rendering, medical visualization, and physically-based animation. Most of my recent work falls in the area of Computational Photography. More specifically, I am intersted in various tasks related to editing of images and video (filtering, detail manipulation, shadow removal, matting, tonal adjustment), and in particular tone mapping of HDR images.

gource - Project Hosting on Google Code Gource is a software version control visualization tool. See more of Gource in action on the Videos page. Introduction Software projects are displayed by Gource as an animated tree with the root directory of the project at its centre. Directories appear as branches with files as leaves. Performa Magazine Interview by Mary Coyne Babette Mangolte is a filmmaker and photographer whose work is currently featured in the Whitney Museum’s “Rituals of Rented Island: Object Theater, Loft Performance, and the New Psychodrama—Manhattan, 1970-1980.” In the Tribeca loft that the artist has called her home and studio since 1974, Mangolte shared some thoughts about the show, current modes of performance, and her memories of and reflections on working with artists including Robert Morris, Richard Foreman, Yvonne Rainer, Trisha Brown and Sylvia Palacios Whitman.

Category Archives: Graphics 2D to 3DAstronomy | Anatomy series #2 | Anatomy Series #2 These 2D-3D graphics can be viewed with or without 3D Chromadepth glasses which can be purchase at www.3dglassesonline.com. Lillian Schwartz’s research began a number of years ago when she worked with art restorers in Italy to identify colors that had been lost in damaged art works, specifically frescoes by Piero Della Francesca. Take risks for ski racing success In the final article in my series on the gifts that Mikaela Shiffrin gave to ski racers for the holidays, I described how I have seen her evolve from consistent and rock-solid (and, of course, incredibly fast) racer into a risk taker on skis (who is now freakishly fast) as evidenced by her improvements in GS over the last year and her dramatic margins of victory in the Aspen slaloms. In that article, I assert that taking appropriate risks is essential for every racer to push their limits and find out how fast they can ski. This article will continue the discussion of risk taking and focus on why it never feels like the right time to start taking risks, how to become a risk taker on skis, and how to build risk taking into your training and your life. No Time Like the Present to Take Risks It never feels like the right time to take risks because, well, there are risks to taking risks. Risk taking is, in a sense, a skill that takes time, commitment, and persistence to develop.

Download Core library This release has been tested only on RedHat Linux and Mac OS X 10.10. See the enclosed INSTALL file for details on requirements. OpenVDB 3.1.0 Library zip - Oct 1 2015 GitHub John Whitney (animator) John Whitney, Sr. (April 8, 1917 – September 22, 1995) was an American animator, composer and inventor, widely considered to be one of the fathers of computer animation. In 1960, he founded Motion Graphics Incorporated, which used a mechanical analogue computer of his own invention to create motion picture and television title sequences and commercials. The following year, he assembled a record of the visual effects he had perfected using his device, titled simply Catalog. In 1966, IBM awarded John Whitney, Sr. its first artist-in-residence position. By the 1970s, Whitney had abandoned his analogue computer in favour of faster, digital processes.

CSSGram What is This? For more background on CSS Image Effects, you can check out my blog series here, or watch my video from CSS Conf EU, which gives a baseline on blend modes and filters. Simply put, CSSgram is a library for editing your images with Instagram-like filters directly in CSS. What we're doing here is adding filters to the images as well as applying color and/or gradient overlays via various blending techniques to mimic these effects. Subatomic Visualization of Molecular Systems Feature Film VFX Automated Content Creation During our [year and a half] relationship, they [research scientist Lars Wood and his business development partner and wife Lisa Wood] have developed new algorithms and tools that allow for direct visualization of the sub-atomic interactions that makes their tools so unique. The use of these visualizations have allowed us to have meaningful conversations about the results and to see the important features and relationships between the molecules. These specific visualizations are unique [to Lars Wood], and provide a view of the intermolecular interactions that is not available with other tools. Gold Chelation Complex - Conventional Above - Subatomic Below

Visualising Subversion with Gource Over the weekend I stumbled across a video link, released (I assume) by Flickr. The video is a visualisation of the last 7 years of commits into the Flickr Subversion repository. Wow, there’s a lot of work been done to Flickr over the past 7 years! What’s even more interesting is you can easily create the same type of visualisation with your own project using an open-source project called Gource.