How can we bring wonder back to the city? While the light of progress has pushed aside the light of the cosmos, and the expansion of the man-made world is crushing the richness of life on this planet. 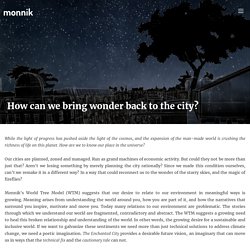 How are we to know our place in the universe? Our cities are planned, zoned and managed. Run as grand machines of economic activity. Trend 8: Urban Farming Becomes Serious Business. Of course, urban agriculture is a trend that we should have mentioned in some trend list years ago, but definitely not here. 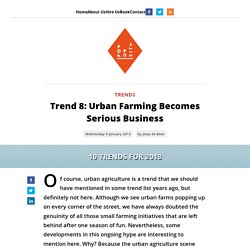 Although we see urban farms popping up on every corner of the street, we have always doubted the genuinity of all those small farming initiatives that are left behind after one season of fun. Nevertheless, some developments in this ongoing hype are interesting to mention here. Why? Because the urban agriculture scene seems to become mature. As urban farming is becoming a serious business in many cities around the world, it’s interesting to see how the city farming scene extends its influence from a ‘vacant-lots-only’ phenomenon to a ‘rest-of-the-city’ phenomenon. The urban farming supply stores point to an increasing professional attitude among the newest generation of urban farmers. Not only vacant lots are used to urban farm, but the farming trend also extends to (empty) office buildings and urban rooftops.

Dgroups - Login. PPS Releases New Report, "The Case for Healthy Places: Improving Health through Placemaking" NYC Playgrounds, The Trust for Public Land | Photo by Seth Sherman A growing body of research over the last several decades has shown the connections between “place” and health, and it is well documented that a person’s zip code can be a more reliable determinant of health than their genetic code. 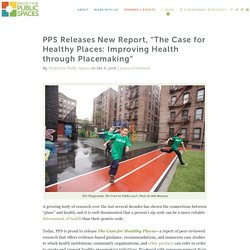 This report uses placemaking as a holistic framework for creating healthy communities. The full report is available here! Learning from Berlin: lessons for emerging collective housing. In recent years the impact of housing affordability has spread beyond the most vulnerable to the middle class, for better or worse raising its profile in the broader community and politics alike. 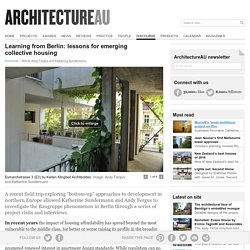 Concurrently, rising concerns about poor standards of apartment construction, and the collective impact this has on our cities, have prompted renewed interest in apartment design standards. EFFEKT designs villages that produce all food and energy. Venice Architecture Biennale 2016: Danish studio EFFEKT has designed a self-sustaining, off-grid village of greenhouse properties, which it will present inside the Danish Pavilion during the Venice Biennale. 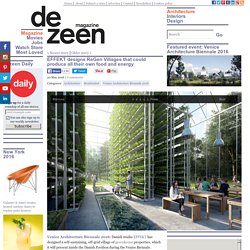 Called ReGen Villages, the project imagines a community of buildings that produce all their own food and energy – a model that aims to tackle a wide spectrum of global issues, from the food and water crises to the rise of CO2 emissions. Each village would comprise a series of buildings with attached greenhouses, creating spaces where families can grow fruit and vegetables, farm aquaponics or recycle waste products. They would also integrate sustainable energy technologies, producing all their own electricity. Stanford University spin-off Company. Urban Allotment Gardens / Members Publications. Anthopoulou. 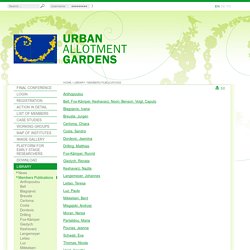 Take a look at this empowering 10-minute clip. 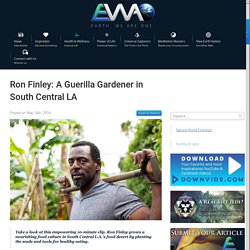 Ron Finley grows a nourishing food culture in South Central L.A.’s food desert by planting the seeds and tools for healthy eating. Why you should listen Ron Finley is an artist and designer that lives in South Central LA. He speaks out about how you can find 3 big things that make South Central: liquor stores, fast food chains, and vacant lots. He couldn’t help but say that there are more drivebys (A shooting performed by a gang member in a slowly moving motor) and drive-throughs than anywhere else.

Because South Central is highly known for high gang activity, it is truly shocking to know that these fast food chains are the reason why the population there is perishing. In order to raise awareness and act accordingly, Finely had the vision to make healthy food accessible for anyone that may come across his own food forest”. 10 of the Best Urban Projects in the World. Article by Erisa Nesimi – Total reading time 5 minutes We take a close look at 10 of the Best Urban Projects in the World. 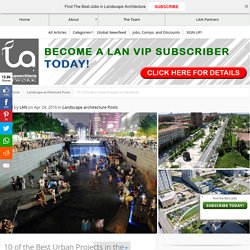 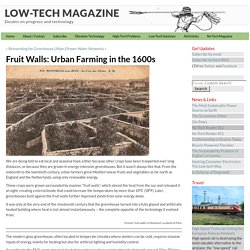 The modern glass greenhouse, often located in temperate climates where winters can be cold, requires massive inputs of energy, mainly for heating but also for artificial lighting and humidity control. According to the FAO, crops grown in heated greenhouses have energy intensity demands around 10 to 20 times those of the same crops grown in open fields. A heated greenhouse requires around 40 megajoule of energy to grow one kilogram of fresh produce, such as tomatoes and peppers. [source - page 15] This makes greenhouse-grown crops as energy-intensive as pork meat (40-45 MJ/kg in the USA). Learning for Sustainable Agriculture: Urban Gardening in Berlin. Recent years have shown a boom of urban gardening initiatives in Berlin. 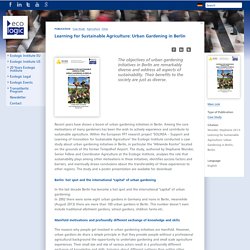 Among the core motivations of many gardeners has been the wish to actively experience and contribute to sustainable agriculture. Within the European FP7 research project "SOLINSA – Support and Learning of Innovation for Sustainable Agriculture" the Ecologic Institute conducted a case study about urban gardening initiatives in Berlin, in particular the "Allmende Kontor" located on the grounds of the former Tempelhof Airport. The study, authored by Stephanie Wunder, Senior Fellow and Coordinator Agriculture at the Ecologic Institute, analyses the role that sustainability plays among other motivations in these initiatives, identifies success factors and barriers, and eventually draws conclusions about the transferability of these experiences to other regions.

The study and a poster presentation are available for download. Untitled. The "Studentenwerk Thüringen" (student services Thuringia) administers approx. 1,100 apartments in Weimar. Monthly rates vary from 105-320 EUR. The university itself does not provide accommodation. Email: wef@stw-thueringen.de Phone: +49 (0)3 61-7 37 18 21 Visiting address: Weimar, Marienstraße 15 a Website: Application: Typically, up to five students share living quarters. 50 Ideas for the New City. The Omnibus is all about ideas. Text books. Urban Farming. Urban gardening in Greece – A new form of protest - Green European Journal. The Greek crisis has radically changed Greek society, politics and the economy.

In just a few years the “Greek Dream” of the beginning of the 21st century, when Greece had experienced some years of rapid GDP growth (about 4% for the first 4 years of the new millennium) mainly due to construction and consumption, has turned into a nightmare. The Greek society is a society in great depression. In this article we will focus on the development of new forms of social movements, social conflicts and solidarity initiatives that we consider to be part of the green ideals and could help the Greek society get out of depression.