Critical Thinking: A Necessary Skill in the Age of Spin 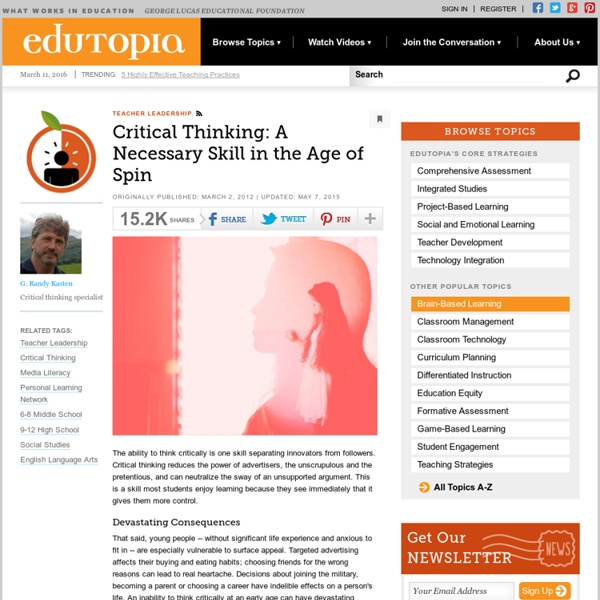 The ability to think critically is one skill separating innovators from followers. Critical thinking reduces the power of advertisers, the unscrupulous and the pretentious, and can neutralize the sway of an unsupported argument. This is a skill most students enjoy learning because they see immediately that it gives them more control. Devastating Consequences That said, young people -- without significant life experience and anxious to fit in -- are especially vulnerable to surface appeal. Every educator is in a position to teach students how to gather information, evaluate it, screen out distractions and think for themselves. A World of Illusions Seeing beyond superficial appearances is especially important today because we are surrounded by illusions, many of them deliberately created. How False Ideas Creep Into Our Belief Systems The first step in teaching critical thinking is to help students recognize how easily false ideas can creep into their belief system. Understanding Motivations Related:  kritičko mišljenje

Carl Sagan’s Pale Blue Dot, Animated in Motion Graphics Over the years, I’ve enjoyed my share of animated adaptations of Carl Sagan’s iconic Pale Blue Dot monologue, based on the seminal photograph of Earth taken by the Voyager 1 spacecraft in 1990. Now comes a lovely motion graphics adaptation by animation studio ORDER — enjoy, and see if you can hold back the chills. From this distant vantage point, the Earth might not seem of any particular interest. Complement this spiritually electrifying ode to our corner of the cosmos with Carl Sagan on science and spirituality. ↬ It’s Okay To Be Smart

Study: There Are Instructions for Teaching Critical Thinking Whether or not you can teach something as subjective as critical thinking has been up for debate, but a fascinating new study shows that it’s actually quite possible. Experiments performed by Stanford's Department of Physics and Graduate School of Education demonstrate that students can be instructed to think more critically. It’s difficult to overstate the importance of critical-thinking skills in modern society. The study took two groups of students in an introductory physics laboratory course, with one group (known as the experimental group) given the instruction to use quantitative comparisons between datasets and the other group given no instruction (the control group). Even after these instructions were removed, they were 12 times more likely to offer creative solutions to improve the experimental methods being used in the class, four times more likely to explain the limitations of the methods, and better at explaining their reasoning than the control group.

3 Ways to help your child develop critical thinking skills Though critical thinking is emphasized in nearly every year of school — from pre-kindergarten to college or graduate school — it is a skill that parents can begin to introduce to their children from a young age. It is even less tricky than a term like “critical thinking” might imply. Here are three ways you can foster critical thinking skills in your student: 1. “Why?” More: How to fully prepare your child for preschool 2. We all wish to protect those individuals who are most important to us, especially when they are distressed. More: 3 Common misconceptions parents have about kindergarten 3. As might be obvious by now, critical thinking is closely linked to creativity and problem solving. More: Kids need art class, even if you have to teach it yourself at home For more tips and strategies to help your student succeed in school, visit varsitytutors.com.

January 11 Birthday Astrology Capricorns born on January 11 possess great personal dignity. They are lovable and can be inflexible in their religious or political philosophy. Attractive and personable, they are also brilliant -- a fact they may hide if it gives them leverage. Friends and Lovers It may appear that January 11 people cultivate influential friends. Children and Family The traditions of family life are important to the men and women born on this date, particularly if they were not a part of their upbringing. Health Keeping healthy isn't difficult for January 11 people, who work hard to maintain their good looks and health. Career and Finances People born on this date need to take charge of every aspect of their career, so they do best if they work as freelancers or soloists of some sort. Dreams and Goals The achievement of personal and professional success against tremendous odds is the chief goal of January 11 people. For more information about astrology, see:ABOUT THE AUTHOR: Jill M.

Developing Critical Thinking Skills in Elementary Students It was stated by Stephen Norris back in 1985 that most kids are not equipped to “recognize assumptions, evaluate arguments, and appraise inferences.” According to another statement by psychologists John Tooby and Leda Cosmides in 1992, humans are evolved simply to avoid dangers and survive. They could not have predicted the digital information age that would introduce itself into our lives only a short time later, transforming life forever. They could also never have imagined the unique generation of children it would develop. Critical Thinking Skills Aren’t an Option It’s because of these things that the importance of teaching critical thinking skills in our students has become a need, rather than simply an option. We have our work cut out for us as we weed through a plethora of questionable information in all forms of media. So how to get elementary school kids to develop critical thinking skills? After all, critical thinking skills require a move toward independence of mind.

Free Critical Thinking Worksheets Critical Thinking Worksheets Critical thinking is more than just a simple thought process. It involves thinking on a much deeper underlying level rather than just at the surface. There is so much information available to us in this world that we don't know what is true and what is not. Brain Teasers- A great way to stimulate thinking. ‘Battling the Gods: Atheism in the Ancient World,’ by Tim Whitmarsh Photo The philosopher Sydney Morgenbesser, beloved by generations of Columbia University students (including me), was known for lines of wit that yielded nuggets of insight. He kept up his instructive shtick until the end, remarking to a colleague shortly before he died: “Why is God making me suffer so much? The major thesis of Tim Whitmarsh’s excellent “Battling the Gods” is that atheism — in all its nuanced varieties, even Morgenbesserian — isn’t a product of the modern age but rather reaches back to early Western intellectual tradition in the ancient Greek world. The period that Whitmarsh covers is roughly 1,000 years, during which the Greek-speaking population emerged from illiteracy and anomie, became organized into independent city-states that spawned a high-achieving culture, were absorbed into the Macedonian Empire and then into the Roman Empire, and finally became Christianized. Continue reading the main story Or rather, don’t thank God. Atheism in the Ancient World

How should we teach critical thinking? One of the most desirable characteristics of school graduates is that they can think critically. This helps them individually and also helps the societies in which they will play a role. It’s a game in which no one loses. So why is it so difficult to achieve? Teaching critical thinking is not something that teachers are explicitly trained to do – in fact very few people are. Standardised testing In standardised assessment in particular it is simply cheaper and quicker to algorithmically mark multiple-choice questions than it is to read and assess nuanced responses showing an advanced use of cognitive skills. South Africa has a standardised system including a highly regulated matriculation programme and national testing that together act as the barometer of good schooling. People often define a rigorous course as one that is heavy in content. The desire to teach to the test at the expense of skills not measured by them is a universal characteristic of standardised testing.

Why should we include Critical Thinking (Good thinking) in Preschool | The Life-long Learner “It is the mark of an educated mind to be able to entertain a thought without accepting it.” – Aristotle Our role as educators is to support children to be independent life long learners in an ever-changing world. As explained by Andreas Schleicher (Director for Education and Skills, and Special Advisor on Education Policy to the Secretary-General at the Organisation for Economic Co-operation and Development (OECD) in Paris) in his presentation to ACER (Schleicher, 2014, p. vii) ‘Today – where we can access content on Google, where routine cognitive skills are being digitised or outsourced, and where jobs are changing so rapidly – accumulating knowledge matters a lot less and success has a lot more to do with ways of thinking; creativity, critical thinking, problem solving, [and] judgement.’ There are diverse interpretations of critical thinking, a broad definition gives scope for interpretation and manoeuvring, however a clear definition could provide a clear path forward. Open-minded