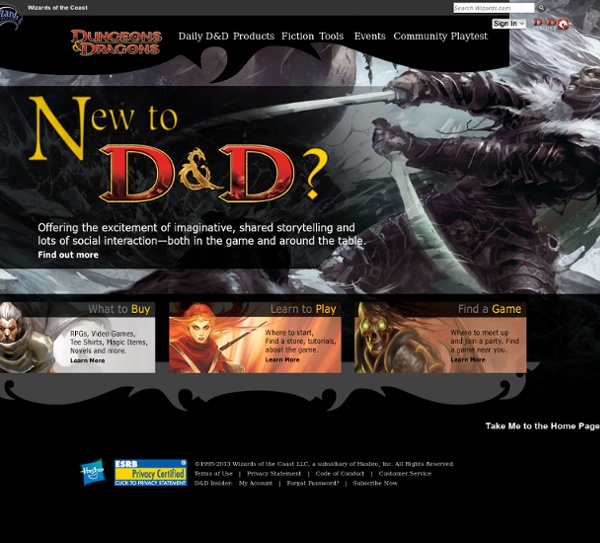 Article (Inn Generator) F rom Dragon Magazine #418: You’ve spent hours on the perfect dungeon, your monsters are all particularly devious and cleverly placed, and your adventure plot is practically Shakespearean in its genius. You’ve thought of everything. Your players are eager to see what you’ve come up with. The first order of the session is to have the characters meet, and nowhere in the D&D cosmos do chance meetings that lead to adventures occur more often than at the inn. Everything goes well, the characters have agreed to the task at hand, and then a player asks, “What’s good to eat here?”

Words In The DarkWords In The Dark If you check out Obsidian Portal on your mobile device, you may get a bit of a shock. Instead of just being the regular site scrunched up onto the screen, you’ll see that it now fits nicely with no zooming and scrolling. We’ve heard your calls for a better mobile version and now we’re getting there. Rather than recreate the entire site, we tried to focus on the core elements of what you need at the table to run a session.

Mr. Rogers (3.5e Deity No matter what land you visit, chances are you'll find at least one person who has at least heard of Mr. Rogers. Those who follow him strictly always greet others as "neighbor", and welcome them to their home regardless of the danger which may proceed. According to some legends, Mr.

101 Questions to Help Create Character Backgrounds and Personalities A character needs to be more than just a few scores and abilities and possessions. There are so many ways to make your character more memorable and most of them don’t take much time. Below is a list of 101 things to consider when creating a character. You certainly don’t need to answer all or even half of them to make a character more interesting. Just answer a few that seem most pertinent and you’ll have a much more interesting character.

Character Development: Creative Writing Print version Characters are the most important component of any narrative. Without them, there would be no story. Character development is an important skill to master because characters are important parts of any creative writing from books and short stories, from biographies and autobiographies, to poetry. The Art of Character Development As authors, it is our Duty To create lovable, enticing Characters And do horrible, evil things to Them. This guide is designed to help people with writer's block, role-players of all levels, and people who are just interested in psychology and philosophy as it applies to fiction. Here you'll find tips, examples, suggestions, general information to aid in creating rounded fictional characters for your stories and/or RPGs, and perhaps even information useful for everyday life. There are many aspects of character development, and your character could be nearly as deep and complete as anyone you might know in real life. However, there are basic keys to fleshing out a character that can help break through blocks and get you and your creation on their way to a great story.

What is Character Development? I remember back when cameras had something inside them called film that you had to get developed. For those of you college-aged or younger, that’s where a technician would treat the film with some chemicals inside a mysterious darkened room, and an image would magically appear on the special paper. But if the process went awry, you could end up with an underdeveloped image that was dark or fuzzy, or one that was over-exposed and therefore too washed out to see clearly. WikiSandbox/OTT The only podcast you will ever need. On The Tropes Promotion! Head over to iTunes and shoot us a review for your chance to win a DVD or Blu-ray featured on any recent top 5 list including Singin' In The Rain The Orphanage Pleasantville Sixth Sense Office Space Who Framed Roger Rabbit Jaws Day of the Dead On The Tropes, Episode 41: Large Ham

Attempts to Avoid a 2D Population Putting the frustrations of job hunting aside (I feel I’m in danger of sounding very ranty and angry, which I’m really not, I promise!), I’m delighted to say that I’ve started writing again. It took me a little while to get back into the swing of things, when I first re-opened the .doc, I felt an overwhelming sense of indifference.