Books to read B 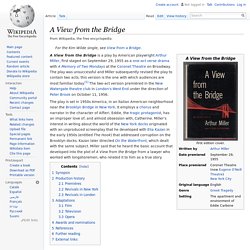 The Iceman Cometh. Characters[edit] Harry Hope – Widowed proprietor of the saloon and rooming house where the play takes place. 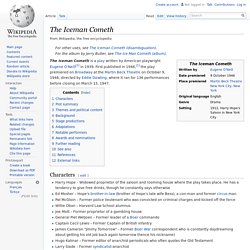 Plot summary[edit] Joe Mott insists that he will soon re-open his casino. Cecil "The Captain" Lewis and Piet "The General" Wetjoen, who fought each other during the Boer War, are now good friends, and both insist that they'll soon return to their nations of origin. Harry Hope has not left the bar since his wife Bess's death 20 years ago. Ed Mosher prides himself on his ability to give incorrect change, but he kept too much of his illegitimate profits to himself and was fired; he says he will get his job back someday.

Finally Hickey arrives, and his behavior throws the other characters into turmoil. During and after Harry's birthday party, most seem to have been somewhat affected by Hickey's ramblings. Eventually, they all return and are jolted by a sudden revelation. Wikipedia catcher in the rye. Roald Dahl. Roald Dahl (/ˈroʊ.əld ˈdɑːl/;[1] 13 September 1916 – 23 November 1990) was a British novelist, short story writer, poet, screenwriter, and fighter pilot.[2] His books have sold more than 250 million copies worldwide.[3] Early life Childhood Roald Dahl was born in 1916 at Villa Marie, Fairwater Road, in Llandaff, Cardiff, Wales, to Norwegian parents, Harald Dahl and Sofie Magdalene Dahl (née Hesselberg).[12] Dahl's father had emigrated to the UK from Sarpsborg in Norway, and settled in Cardiff in the 1880s with his first wife, a Frenchwoman named Marie Beaurin-Gresser. 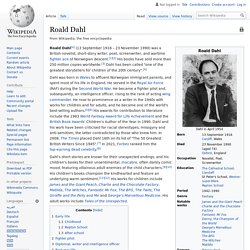 They had two children together, Ellen Marguerite and Louis, before her death in 1907.[13] His mother came over and married his father in 1911. Dahl was named after the Norwegian polar explorer Roald Amundsen. The Creators. Contents[edit] The Creators, subtitled A History of Heroes of the Imagination, is the story of mankind's creativity. 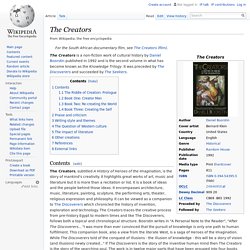 It highlights great works of art, music and literature but it is more than a recitation or list. The Seekers. The Seekers are an Australian folk-influenced pop quartet, originally formed in Melbourne in 1962. 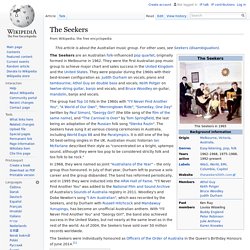 They were the first Australian pop music group to achieve major chart and sales success in the United Kingdom and the United States. They were popular during the 1960s with their best-known configuration as: Judith Durham on vocals, piano and tambourine; Athol Guy on double bass and vocals; Keith Potger on twelve-string guitar, banjo and vocals; and Bruce Woodley on guitar, mandolin, banjo and vocals. In 1968, they were named as joint "Australians of the Year" – the only group thus honoured. In July of that year, Durham left to pursue a solo career and the group disbanded. The Catcher in the Rye.

Plot[edit] The novel takes place over three days in December 1949. 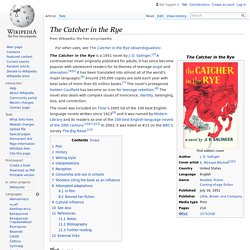 Holden Caulfield is a 16-year-old boy from New York City. He recently flunked out of prestigious boarding schools because he doesn't apply himself. Holden tells the story from a tuberculosis rest home. Holden begins his story at Pencey Preparatory, an exclusive private school (fictional, though based on Salinger's own experience at Valley Forge Military Academy) in Agerstown, Pennsylvania, on the Saturday afternoon of the traditional football game with rival school Saxon Hall. Adolf Galland. Galland flew Messerschmitt Bf 109s during the Battle of France and the Battle of Britain. 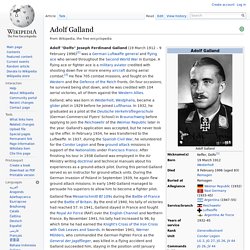 By the end of 1940, his tally of victories had reached 57. In 1941, Galland stayed in France and fought the Royal Air Force (RAF) over the English Channel and Northern France. On the Road. On the Road is a novel by American writer Jack Kerouac, based on the travels of Kerouac and his friends across the United States. 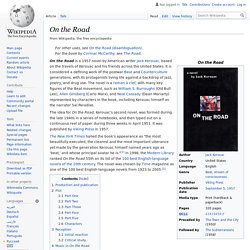 It is considered a defining work of the postwar Beat and Counterculture generations, with its protagonists living life against a backdrop of jazz, poetry, and drug use. The novel, published in 1957, is a roman à clef, with many key figures of the Beat movement, such as William S. Burroughs (Old Bull Lee), Allen Ginsberg (Carlo Marx) and Neal Cassady (Dean Moriarty) represented by characters in the book, including Kerouac himself as the narrator Sal Paradise. The Great Terror. The Great Terror: A Reassessment by Robert Conquest The Great Terror: Stalin's Purge of the Thirties is a book by British historian Robert Conquest, published in 1968. 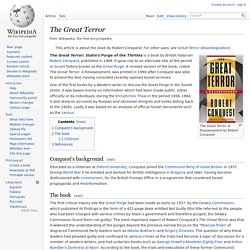 It gave rise to an alternate title of the period in Soviet history known as the Great Purge. A revised version of the book, called The Great Terror: A Reassessment, was printed in 1990 after Conquest was able to amend the text, having consulted recently opened Soviet archives. One of the first books by a Western writer to discuss the Great Purge in the Soviet Union, it was based mainly on information which had been made public, either officially or by individuals, during the Khrushchev Thaw in the period 1956–1964. It also drew on accounts by Russian and Ukrainian émigrés and exiles dating back to the 1930s. 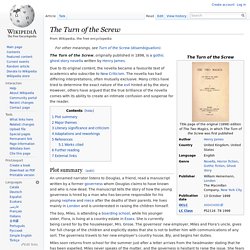 Due to its original content, the novella became a favourite text of academics who subscribe to New Criticism. The novella has had differing interpretations, often mutually exclusive. Many critics have tried to determine the exact nature of the evil hinted at by the story. "legends of a suicide" Cloudstreet.

As one of the most renowned pieces of Australian literature, Cloudstreet encompasses critical Australian themes of family relationships, finding values within the stimuli of life. Winton said in 2007 that "Cloudstreet was my way to express the importance of all the relationships I had throughout my life in Western Australia. As some of you may have picked up from the setting, I love water; the beach, the rivers and the lakes. "[citation needed] Plot summary[edit] Tim Winton. Timothy John "Tim" Winton (born 4 August 1960) is an Australian novelist and short story writer.

Life[edit] Winton was born in Karrinyup, Western Australia,[1] but moved at age of 12 to the regional city of Albany.[2] Winton has been named a Living Treasure by the National Trust[3] and awarded the Centenary Medal for service to literature and the community.[4] He is patron of the Tim Winton Award for Young Writers sponsored by the City of Subiaco, Western Australia.[5] He has lived in Italy, France, Ireland and Greece but currently lives in Fremantle, near Perth, with his wife and three children. His younger brother is a musician and high school chaplain Andrew Winton and his younger sister is Sharyn O'Neill, the current Director General of the WA Education Department.

Literary career[edit] Salman rushdie midnight's children. First They Killed My Father. First They Killed My Father: A Daughter of Cambodia Remembers is a 2000 non-fiction book written by Loung Ung, a Cambodian author and survivor of the Pol Pot regime. It is a personal account of her experiences during the Khmer Rouge years. ABC OPEN: Dennis J Pale. Breakfast at Tiffany's. Breakfast at Tiffany's may refer to: In Cold Blood. In Cold Blood is a non-fiction book first published in 1966, written by American author Truman Capote; it details the 1959 murders of Herbert Clutter, a farmer from Holcomb, Kansas, his wife, and two of their four children.

The book became the greatest crime seller of its time. [citation needed] Some critics consider Capote's work the original non-fiction novel, although other writers had already explored the genre, such as Rodolfo Walsh in Operación Masacre (1957). Pianist (disambiguation) Le monde selon Garp (1982) Sniper One: The Blistering True Story of a British Battle Group Under Siege:Amazon.co.uk:Books.

Roald Dahl short stories bibliography. No Comebacks. No Comebacks is a 1982 collection of ten short stories by Frederick Forsyth. Each story takes place in a different setting and ends with a plot twist. Several of them involve a central male character without any apparent strength who is put under pressure, but who does not give in. Memoirs of an Infantry Officer.

Memoirs of an Infantry Officer is a novel by Siegfried Sassoon, first published in 1930. It is a fictionalised account of Sassoon's own life during and immediately after World War I. Soon after its release, it was heralded as a classic and was even more successful than its predecessor, Memoirs of a Fox-Hunting Man. Good-Bye to All That. Good-Bye to All That, an autobiography by Robert Graves, first appeared in 1929, when the author was thirty-four. A Farewell to Arms. Three Soldiers. Three Soldiers by John Dos Passos. The Return of the Soldier. The Time Traveler's Wife. The Crucible. The Crucible is a 1953 play by U.S. playwright Arthur Miller. Death of a Salesman. Plot[edit] Willy Loman returns home exhausted after a cancelled business trip. Worried over Willy's state of mind and recent car accident, his wife Linda suggests that he ask his boss Howard Wagner to allow him to work in his home city so he will not have to travel.

Willy complains to Linda that their son, Biff, has yet to make good on his life. Despite Biff's promise as an athlete in high school, he flunked senior-year math and never went to college. Oscar Wilde. Barbarians at the Gate: The Fall of RJR Nabisco. Those opposed to Johnson's bid for the company, Henry Kravis and his cousin George R. The Brothers Karamazov. The Idiot. Crime and Punishment. East of Eden. The Grapes of Wrath. Of Mice and Men. American Psycho. A Clockwork Orange. Nineteen Eighty-Four. The English Patient. The Discoverers. The Creators. Rats: Observations on the History and Habitat of the City's Most Unwanted Inhabitants:Amazon:Books.