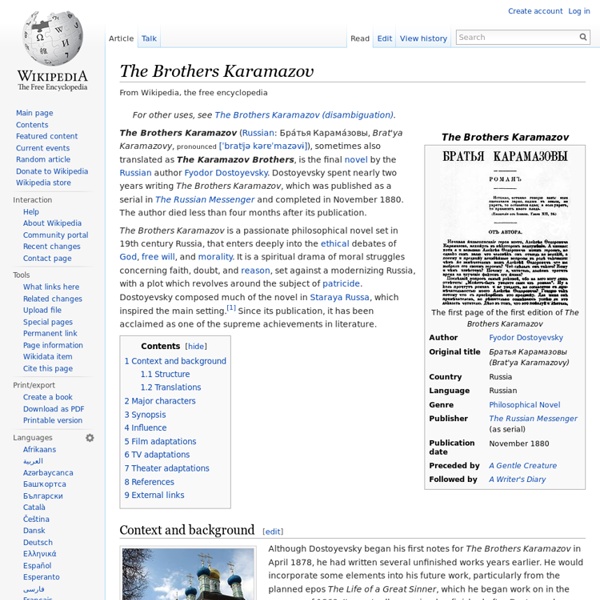 The Brothers Karamazov (Russian: Бра́тья Карама́зовы, Brat'ya Karamazovy, pronounced [ˈbratʲjə kərɐˈmazəvɨ]), sometimes also translated as The Karamazov Brothers, is the final novel by the Russian author Fyodor Dostoyevsky. Dostoyevsky spent nearly two years writing The Brothers Karamazov, which was published as a serial in The Russian Messenger and completed in November 1880. The author died less than four months after its publication. The Brothers Karamazov is a passionate philosophical novel set in 19th century Russia, that enters deeply into the ethical debates of God, free will, and morality. It is a spiritual drama of moral struggles concerning faith, doubt, and reason, set against a modernizing Russia, with a plot which revolves around the subject of patricide. Dostoyevsky composed much of the novel in Staraya Russa, which inspired the main setting.[1] Since its publication, it has been acclaimed as one of the supreme achievements in literature. Context and background[edit]

The Tyranny of Guilt: An Essay on Western Masochism by Pascal Bruckner Pascal Bruckner is best known in Britain for the novel Bitter Moon, which Roman Polanski made into a film (incidentally, a much better adaptation than his overrated version of Robert Harris's The Ghost). But he is also a thinker of some standing in France. The cliche of a French philosophe is the complacent obscurantist, wallowing in a swamp of postmodern jargon, who subjects textual meaning to cultural interrogation and finds that it's all the dastardly product of a white, male conspiracy. Bruckner, more an heir of Raymond Aron than, say, Jean Baudrillard, is not that kind of philosopher and Tyranny of Guilt: An Essay on Western Masochism is not that kind of book.

Barbarians at the Gate: The Fall of RJR Nabisco Those opposed to Johnson's bid for the company, Henry Kravis and his cousin George R. Roberts, were among the pioneers of the leveraged buyout. Kravis was the first person Johnson talked to about doing the LBO, and feels betrayed after learning that Johnson wants to do the deal with another firm, American Express's former Shearson Lehman Hutton division. Ted Forstmann and his Forstmann Little buyout firm also played a prominent role.

Slaughterhouse-Five Slaughterhouse-Five, or The Children's Crusade: A Duty-Dance with Death (1969) is a satirical novel by Kurt Vonnegut about World War II experiences and journeys through time of a soldier named Billy Pilgrim. It is generally recognized as Vonnegut's most influential and popular work.[1] Vonnegut's use of the firebombing of Dresden as a central event makes the novel semi-autobiographical, as he was present during the bombing. Plot summary[edit] Victor Hugo Victor Marie Hugo (French pronunciation: ​[viktɔʁ maʁi yɡo]; 26 February 1802 – 22 May 1885) was a French poet, novelist, and dramatist of the Romantic movement. He is considered one of the greatest and best known French writers. In France, Hugo's literary fame comes first from his poetry but also rests upon his novels and his dramatic achievements. Among many volumes of poetry, Les Contemplations and La Légende des siècles stand particularly high in critical esteem. Outside France, his best-known works are the novels Les Misérables, 1862, and Notre-Dame de Paris, 1831 (known in English as The Hunchback of Notre-Dame). Though a committed royalist when he was young, Hugo's views changed as the decades passed, and he became a passionate supporter of republicanism;[citation needed] his work touches upon most of the political and social issues and artistic trends of his time.

Heroin: art and culture's last taboo One of the easiest places to find heroin in Paris is in the streets in and around the Gare du Nord, a stone's throw away from the Eurostar terminal. I know about this place partly because I live in Paris and I am a frequent Eurostar traveller, and partly because this is where Google sent me when I typed in the request "Where to find heroin in Paris". Apparently the most popular spot for dealing is the rue Ambroise-Paré which contains a series of entrances to underground car parks where users can shoot up in relative privacy. The place permanently stinks of piss and is under constant police surveillance, as dealers and clients scurry back and forth between their hiding places. You can watch all of this action, nibbling on a snack and sipping champagne, from the front end of the Eurostar VIP Lounge which backs on to the street. In fact although there are plenty of drugs around the Gare du Nord there is not much real heroin.

Death of a Salesman Plot[edit] Willy Loman returns home exhausted after a cancelled business trip. Worried over Willy's state of mind and recent car accident, his wife Linda suggests that he ask his boss Howard Wagner to allow him to work in his home city so he will not have to travel. Willy complains to Linda that their son, Biff, has yet to make good on his life. Despite Biff's promise as an athlete in high school, he flunked senior-year math and never went to college. Biff and his brother Happy, who are temporarily staying with Willy and Linda after Biff's unexpected return from the West, reminisce about their childhood together. Land's Edge: A Coastal Memoir by Tim Winton – review Winton grew up on Australia's west coast, where he would fall asleep after days spent fishing, surfing, diving and swimming, with his back "a map of dried salt and crackling sunburn". He has been in love with the ocean ever since and writes about it with an almost religious reverence. Free diving as a teenager, he would "understand the Christian mystics for moments at a time", and hold his breath until "the final forgetfulness hovered at the edge of vision".

Oscar Wilde Oscar Fingal O'Flahertie Wills Wilde (16 October 1854 – 30 November 1900) was an Irish author, playwright and poet. After writing in different forms throughout the 1880s, he became one of London's most popular playwrights in the early 1890s. He is remembered for his epigrams, his novel The Picture of Dorian Gray, his plays, as well as the circumstances of his imprisonment and early death. Wilde's parents were successful Anglo-Irish Dublin intellectuals. Their son became fluent in French and German early in life. The role of women in medieval Andalusian Arabic story-telling – December 16, 2013Posted in: Articles The role of women in medieval Andalusian Arabic story-telling By Arie Schippers Verse and the fair sex : studies in Arabic poetry and in the representation of women in Arabic literature, ed.

The Crucible The Crucible is a 1953 play by U.S. playwright Arthur Miller. It is a dramatized and partially fictionalized story of the Salem witch trials that took place in the Province of Massachusetts Bay during 1692 and 1693. Miller wrote the play as an allegory of McCarthyism, when the U.S. government blacklisted accused communists.[1] Miller himself was questioned by the House of Representatives' Committee on Un-American Activities in 1956 and convicted of "contempt of Congress" for refusing to identify others present at meetings he had attended.[2] The play was first performed at the Martin Beck Theater on Broadway on January 22, 1953, starring E.G. Marshall, Beatrice Straight and Madeleine Sherwood. Act One[edit]

Anton Chekhov Anton Pavlovich Chekhov (/ˈtʃɛkɔːf, -ɒf/;[1] Russian: Анто́н Па́влович Че́хов, pronounced [ɐnˈton ˈpavləvʲɪtɕ ˈtɕɛxəf]; 29 January 1860[2] – 15 July 1904)[3] was a Russian physician, playwright and author who is considered to be among the greatest writers of short stories in history. His career as a playwright produced four classics and his best short stories are held in high esteem by writers and critics.[4][5] Chekhov practiced as a medical doctor throughout most of his literary career: "Medicine is my lawful wife", he once said, "and literature is my mistress."[6] Along with Henrik Ibsen and August Strindberg, Chekhov is often referred to as one of the three seminal figures in the birth of early modernism in the theater.[7]