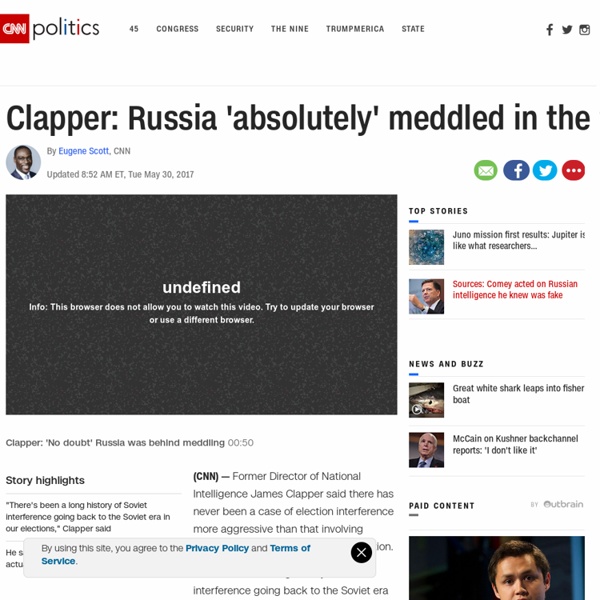 By using this site, you agree to the Privacy Policy and Terms of Service. Clapper: Russia 'absolutely' meddled in the 2016 election By Eugene Scott, CNN Updated 8:52 AM ET, Tue May 30, 2017 Clapper: 'No doubt' Russia was behind meddling Replay More Videos ... Pause Current Time 0:00 Duration Time 0:00 Remaining Time -0:00 Stream TypeLIVE Loaded: 0% Progress: 0% Fullscreen Mute Configuration Playback Rate Current Time The live stream went offline.Player will resume on rebroadcast. Playing in Picture-in-Picture mode The video player encountered an error. Clapper: 'No doubt' Russia was behind meddling 00:50 Story highlights "There's been a long history of Soviet interference going back to the Soviet era in our elections," Clapper saidHe said it was unclear if "this interference actually affected the outcome of the election" "Are you 100% sure that Russia was behind the election meddling that you described," Cuomo asked Clapper Tuesday. Watch James Clapper's full New Day interview "Absolutely," Clapper responded.

Red Alert: The First Amendment Is in Danger – BillMoyers.com Reporters attempt to pose questions to President Donald Trump during a news conference on Feb. 16, 2017. (Photo by Mario Tama/Getty Images) Of all the incredible statements issuing from the fantasy factory that is the imagination of Donald Trump, the one he recently made in a speech to graduates of the Coast Guard academy, that “no politician in history — and I say this with great surety — has been treated worse or so unfairly” sets an unenviable record for brazen ignorance plus a toxic mix of self-aggrandizement and self-pity. In his eyes, the most villainous persecutors are the mainstream “fake news” organizations that dare to oppose his actions and expose his lies. Such a bill might accuse the press of “seditious libel,” meaning the circulation of an opinion tending to induce a belief that an action of the government was hostile to the liberties and happiness of the people.

Donald Trump to Hungry Seniors: Drop Dead – BillMoyers.com Joseph Horecky, 90 and with a vision impairment, makes a call from his kitchen after receiving a "Meals on Wheels" delivery from the Sullivan County Office for the Aging on Sept. 21, 2012 in Barryville, New York. The nutrition program is for residents age 60 and older and is funded by federal, state and county grants. (Photo by John Moore/Getty Images) This post originally appeared at The Nation. The budget sent to Congress Tuesday for fiscal year 2018 puts the country’s schizophrenia over feeding hungry citizens back on the agenda — this time in the guise of defunding food programs for seniors, millions of whom are homebound, ill and unable to cook or shop. In March, the Trump administration announced it was slashing federal funds for those programs, meaning that more seniors will go hungry, and waiting lists — already numbering in the thousands in some parts of the country — will get larger.

Congress and Farmers Are Shocked By Proposed USDA Cuts A tractor pulls a planter through a field as corn is planted in Princeton, Ill. Daniel Acker/Bloomberg/Getty Images hide caption toggle caption This is what emboldened white supremacists look like It was a scene out of the darkest days of the civil rights movement. A couple of dozen white supremacists rallied around a statue of Robert E Lee, a Confederate army general, in Virginia, carrying torches and chanting: “You will not replace us.” But this was no black-and-white newsreel, relaying the horrors of a time long since past. This grotesque scene played out on Saturday, at a rally headlined by the white supremacist Richard Spencer. The cause for this neo-Klan rally? Trump Decimated By Award-Winning Journalist Leonard Pitts, Jr. penned an open letter to Trump and “other members of the Fourth Reich” asking the question that has been on the mind of many Americans these days: “Just who the hell do you think you are?” A nationally syndicated columnist and winner of the 2004 Pulitzer Prize for Commentary, Pitts rose to national prominence after writing a widely circulated column on September 12, 2001, entitled “Sept. 12, 2001: We’ll go forward from this moment,” discussing the indestructible nature of the American spirit in the face of the September 11 attacks.

At LA airport's new private terminal, the rich can watch normal people suffer The guiltiest pleasure at Los Angeles international airport’s (LAX) new private terminal for the mega-rich is not the plush, hushed privacy, or the beds with comforters, or the massages, or the coriander-scented soap, or the Willie Wonka-style array of chocolates and jelly beans, or the Napa Valley cabernet. It is the iPad that sits on a counter at the entrance, with a typed little note: “Here is a glimpse of what you’re missing over at the main terminal right now.” The screen shows travellers hauling bags through packed terminals, queuing in long lines, looking harassed and being swallowed into pushing, shoving paparazzi scrums – routine hazards for the 80 million people who pass through LAX each year. “There they process thousands of people at a time, they’re barking. It’s loud. Here it’s very, very lovely,” said Gavin de Becker, who runs the new terminal, called Private Suite.

Kansas abandons massive tax cuts that provided model for Trump's plan Kansas has rejected the years-long tax-cutting experiment that brought its governor, Sam Brownback, to international attention and provided a model for the Trump administration’s troubled tax plans. In a warning shot to the Trump administration, even Brownback’s fellow Republicans voted to override his veto of a bill to reverse many of the tax cuts he championed as a way to spur entrepreneurs and the economy, but which have left the state with a $1bn hole in its budget. Starting in 2012, Brownback’s plan has been to “march to zero” – cutting taxes wherever possible in the belief that the money Kansans saved would flow into the wider economy and drive growth. The governor was advised by Arthur Laffer, the economist who inspired Ronald Reagan’s “trickle-down” economic theory.