A New Kind of Public Service 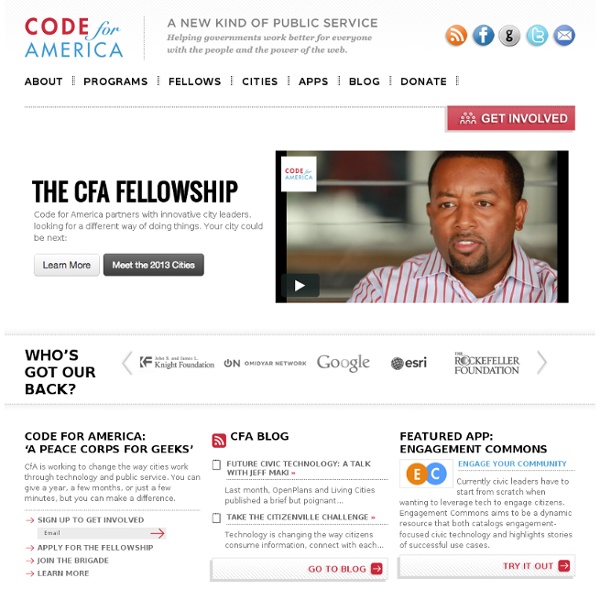 UK Open Data Institute (Silicon Roundabout) Posted by Information Age on 28 November 2011 Share article 0googleplus Urban activists hack their way toward open government OAKLAND, CA—Four years ago, Code For America (CFA) was founded with the mission to "help governments work better for everyone with the people and the power of the Web." Within two years, the San Francisco-based nonprofit set up a fellowship program, inviting American cities to receive a team of three young motivated developers, activists, and policy planners. The Washington Post's description captured what everyone was already thinking: CFA is the “technology world’s equivalent of the Peace Corps or Teach for America.” It's an apt comparison. All three organizations choose a specific municipal problem and recruit volunteers with specific skillsets—in this case, people able to conceptualize and build some sort of tech tool—to tackle it.

Presentación Impacto Económico del Gobierno Electrónico - Pablo Valenti y Lucio Castro Najlepsze mapy historyczne w internecie Historia to nie tylko daty. Historia to wydarzenia, które działy się kiedyś i gdzieś. Dzisiaj zapraszam na małą przygodę z gdzieś, czyli na przygodę do świata historycznych map. How Hyperlocal Reporting Can Improve Cities From The Bottom Up [My Ideal City] Crowdsourced data-gathering platforms are changing the top-down nature of how news is gathered and disseminated by placing reporting tools in the hands of citizens, allowing any individual to instantly broadcast about the situation around them. Often using mobile phone technology, these hyperlocal reporting systems not only provide real-time, location specific data, but also boost civic engagement by establishing direct channels of communication from the ground up, while helping to ensure community well-being by rapidly documenting potentially harmful incidents. Gary Hack, who is part of a team developing a crowdsourced plan for Bogota, Colombia called MyIdealCity, believes that future of urban planning is in hyperlocal reporting. The celebrated urban planner told PSFK.com: Sensors are fine for counting, but the best source of intelligence about what is happening on the ground is those who are actually there.

Roman Architecture About the Course This course is an introduction to the great buildings and engineering marvels of Rome and its empire, with an emphasis on urban planning and individual monuments and their decoration, including mural painting. While architectural developments in Rome, Pompeii, and Central Italy are highlighted, the course also provides a survey of sites and structures in what are now North Italy, Sicily, France, Spain, Germany, Greece, Turkey, Croatia, Jordan, Lebanon, Libya, and North Africa. The lectures are illustrated with over 1,500 images, many from Professor Kleiner's personal collection. View class sessions »

About Ars Electronica Ars Electronica holds one of the world’s largest archives of digital media art covering the last 30 years. It consists of documentations of the Ars Electronica Festival since 1979, the archive of Prix Ars Electronica with submissions of artists since 1987, as well as documentation of projects of the Ars Electronica Futurelab and of exhibitions in the Ars Electronica Center and worldwide. Beside thousands of video- and audio recordings, numerous photographs, negatives, and slides are stored, as well as an extensive collection of print material including publications, posters, folders, and press material. Ars Electronica Archive goes public! 30 Places to Find Open Data on the Web Finding an interesting data set and a story it tells can be the most difficult part of producing an infographic or data visualization. Data visualization is the end artifact, but it involves multiple steps – finding reliable data, getting the data in the right format, cleaning it up (an often underestimated step in the amount of time it takes!) and then finding the story you will eventually visualize.

Videos Creative Commons Kiwi This short and fun animation video by Creative Commons Aotearoa New Zealand explains the CC licenses. A Shared Culture A high-level overview of the goals of Creative Commons and how we are “saving the world from failed sharing.” Created by Jesse Dylan, director of the “Yes We Can” video. 14 Websites To Find Free Creative Commons Music We’ve introduced you to a variety of quality image sites where you can find Creative Commons images, but the Creative Commons license goes far beyond just images. Different types of content are licensed online using Creative Commons — videos, music, and even blog content. You’ll find plenty of it online to share, remix and use commercially.