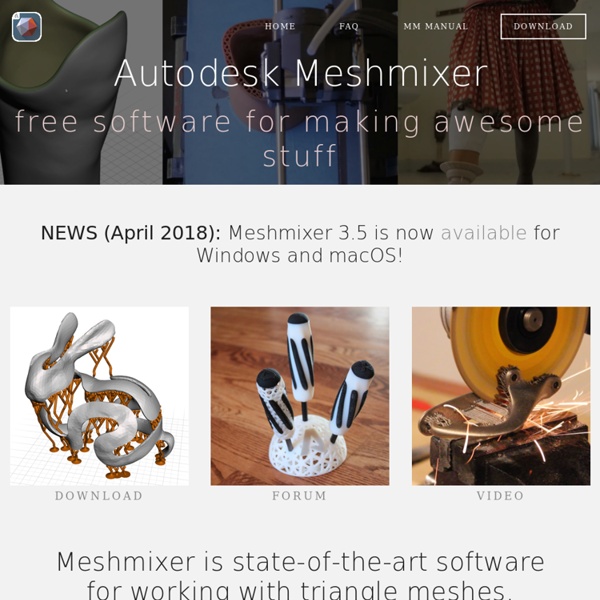 Alias Tutorial : Displacement Mapping In the last tutorial, we built NURBS surfaces for embossed lettering on a beer bottle. This time we’ll use Displacement Mapping to create a polygon model suitable for rapid prototyping or rendering. Usually Displacement Mapping is a rendering ‘trick’ to give a surface a complex look without having to model it. However, we can also use this technique to create a real model – a polygon (mesh) - which is a good enough for prototyping and design development. In this tutorial we’ll create a logo graphic (as .jpg or .tif), and use it as a displacement map to emboss a logo onto the shoulder surface of a beer bottle. Start by creating a shader with a displacement map and applying it to your surface. Studio Basic netfabb Basic is available to anybody, it is free just like in free beer, and runs on Windows, Linux or Mac. netfabb Basic is not just a viewer, it provides mesh edit, repair and analysis capabilities to everyone already being or aspiring to become part of this fantastic, growing, creative, high-tech industry called Additive Manufacturing, Rapid Prototyping or 3D Printing. netfabb Basic is available and is just one click away. Its compact size of only a few megabytes allows a quick download, an easy installation and the handling of STL and slice files within seconds.

Free 3D Modeling Software To Create, Mash 3D Models: Autodesk Meshmixer Autodesk Meshmixer (or simply Meshmixer) is free 3D modeling software. It lets you easily create, mash, and sculpt 3D designs. You can generate your own 3D model by using dozens of tools and shapes. Catia Tutorial: Using 3D Modeling Software for 3D Printing This tutorial is for 3D printing enthusiasts who are already familiar with CATIA and would like to know the tricks for making a 3D printable model with CATIA. Throughout this tutorial, you will learn the best practices for modeling, correcting and exporting an object to be 3D printed. By the end of this tutorial, you’ll have mastered: CATIA is a modeling program geared toward the modeling of industrial objects, but it can be used for much more than just that. Its function relies on the use of waves and NURBS for the base of its functions.

heekscad - Free CAD based on Open CASCADE There is a fork of HeeksCAD at However, I have been working on this Google Code version quite a lot, recently. I have gone back to my older undo code and HeeksCAD is now quicker and easier for me to understand. Setting Up A Render Farm What and Why? A render farm is simply a collection of networked computers that work together to render a sequence in less time. By dividing your sequence between multiple machines your total render time becomes a fraction of what it is on a single computer. Most production studios will fill huge rooms with server rack upon server rack, full of thousands of rendering computers (or render nodes as you’ll hear them called).

TYPOGRAPHY / Cloud 3D Typeface and Cloud Generator Alright, let's do something simple this time. We will do the "easy way" of doing Cloud 3D Typeface (or 3D Type for short). Before I show you the quick way to do this, I have to mention few things again before it gets confusing:Cloud looking effects are achieved via Point Density, whether the data is oiriginated from Particle System or Object Vertices. ICAM- CAM-POST, CNC Post-Processors, Machine Simulation and Post-processing software CAM-POST Benefit Highlights Ease of use takes the front seat for a quick & efficient implementation... CAM-POST includes over 200 NC controller quick-start defaults, which can be selected to simplify an d speed post-processor creation.

KiCadLib: Device and Footprint Library for KiCad This is a collection of electronic device symbols and footprints for KiCad which is used by other projects on open-project.ch. Please leave a comment, if you find this library useful! Download The library can be downloaded from github at Be aware that the latest version of KiCad uses different internal units (mm instead of deci-mills) and thus footprints designed in the latest version are incompatible with older versions. Therefore, two branches exist in the git repository: master for the latest KiCad version, deci-mills for older versions.

These New 3D Models Put the Smithsonian’s Most Renowned Items in Your Hands The Wright Flyer, the legendary aircraft built by the Wright Brothers and sent skyward over Kitty Hawk in 1903, was acquired by the Smithsonian in 1948. Since then, it’s been on public display nearly continuously. Of course, visitors aren’t allowed to touch the plane, and educators teaching lessons on the Flyer have had to use models to give students the chance to handle it and see it from different positions. Engineers and historians have faced similar limitations, unable to climb inside to examine its inner machinery or take out a tape measure to assess its specs. Now, though, anyone with an internet connection can handle a virtual 3D version of the Flyer and print a replica at any scale. The 3D model viewer above, along with 20 other 3D models released today as part of the Digitization Program Office‘s Smithsonian X 3D Conference, is the result of years of labor by Vince Rossi, Adam Metallo and other staff in the Digitization Office.

47 Amazing Blender Tutorials Okay all you freeloaders... here are the Blender tutorials I promised! I got you 47 amazing tuts from around the far reaches of the interwebs. So go get some coffee or a can of coke, cause you're gonna be here for a while. Model and texture a wooden barrel using multiple modifiers and projection painting with Jonathan Williamson . DAZ Studio Think of DAZ Studio as a complete virtual photo and film studio. Real-world photo or film projects pose challenges. These begin with scouting for places to shoot, and end when you have all of the images or footage you need. Scheduling is a tricky and costly affair that can go wrong for any number of reasons. In contrast, things get a lot more fun when you can:

Getting Started Learn about the fascinating features of the new Smithsonian X 3D Explorer and how to navigate, explore and manipulate 3D collection objects. This page gets you started and explains the functionality of the explorer in detail. The Smithsonian X 3D Explorer is beta software. If you find bugs or want to share ideas for improving the software and website, we'd be happy to hear from you.