MLDonkey - Wikipedia. Originally a Linux client for the eDonkey protocol, it now runs on many flavors of Unix-like, OS X, Microsoft Windows and MorphOS and supports numerous peer-to-peer protocols. 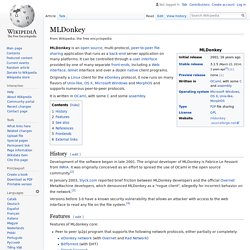 History[edit] Development of the software began in late 2001. The original developer of MLDonkey is Fabrice Le Fessant from INRIA. It was originally conceived as an effort to spread the use of OCaml in the open source community.[2] In January 2003, Slyck.com reported brief friction between MLDonkey developers and the official Overnet MetaMachine developers, which denounced MLDonkey as a "rogue client", allegedly for incorrect behavior on the network.[3] Versions before 3.0 have a known security vulnerability that allows an attacker with access to the web interface to read any file on the file system.[4] Features[edit] Features of MLdonkey core: MLDonkey is able to connect simultaneously to different peers using different network protocols.

eDonkey network - Wikipedia. The eDonkey Network (also known as the eDonkey2000 network or eD2k) is a decentralized, mostly server-based, peer-to-peer file sharing network created in 2000 by US developers Jed McCaleb and Sam Yagan[1][2][3] that is best suited to share big files among users, and to provide long term availability of files. 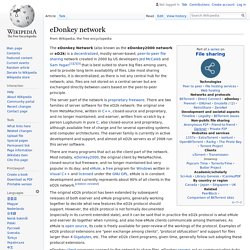 Like most sharing networks, it is decentralized, as there is not any central hub for the network; also, files are not stored on a central server but are exchanged directly between users based on the peer-to-peer principle. There are many programs that act as the client part of the network. Most notably, eDonkey2000, the original client by MetaMachine, closed-source but freeware, and no longer maintained but very popular in its day; and eMule, a free program for Windows written in Visual C++ and licensed under the GNU GPL. eMule is in constant development and currently represents about 90% of all clients in the eD2k network. BitTorrent - Wikipedia. Programmer Bram Cohen, a former University at Buffalo graduate student in Computer Science,[4] designed the protocol in April 2001 and released the first available version on July 2, 2001,[5] and the final version in 2008.[6] BitTorrent clients are available for a variety of computing platforms and operating systems including an official client released by Bittorrent, Inc. 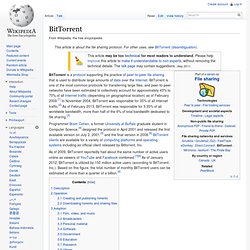 As of 2009, BitTorrent reportedly had about the same number of active users online as viewers of YouTube and Facebook combined.[7][8] As of January 2012[update], BitTorrent is utilized by 150 million active users (according to BitTorrent, Inc.). Direct Connect (protocol) - Wikipedia. Hubs feature a list of clients or users connected to them. 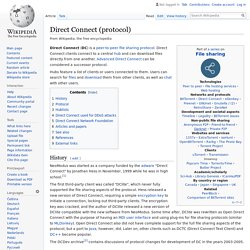 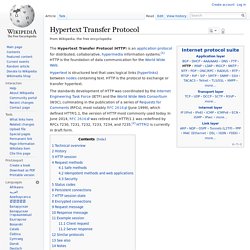 The standards development of HTTP was coordinated by the Internet Engineering Task Force (IETF) and the World Wide Web Consortium (W3C), culminating in the publication of a series of Requests for Comments (RFCs), most notably RFC 2616 (June 1999), which defined HTTP/1.1, the version of HTTP most commonly used today. In June 2014, RFC 2616 was retired and HTTP/1.1 was redefined by RFCs 7230, 7231, 7232, 7233, 7234, and 7235.[2] HTTP/2 is currently in draft form. Technical overview[edit] URL beginning with the HTTP scheme and the WWW domain name label. A web browser is an example of a user agent (UA). HTTP is designed to permit intermediate network elements to improve or enable communications between clients and servers. File Transfer Protocol - Wikipedia. The File Transfer Protocol (FTP) is a standard network protocol used for the transfer of computer files from a server to a client using the Client–server model on a computer network. 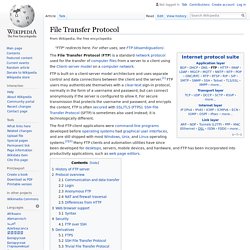 FTP is built on a client-server model architecture and uses separate control and data connections between the client and the server.[1] FTP users may authenticate themselves with a clear-text sign-in protocol, normally in the form of a username and password, but can connect anonymously if the server is configured to allow it. For secure transmission that protects the username and password, and encrypts the content, FTP is often secured with SSL/TLS (FTPS). SSH File Transfer Protocol (SFTP) is sometimes also used instead; it is technologically different. Gnutella - Wikipedia. Gnutella (/nʌˈtɛlə/ with a silent g, but often /ɡnʌˈtɛlə/) (possibly by analogy with the GNU Project) is a large peer-to-peer network. 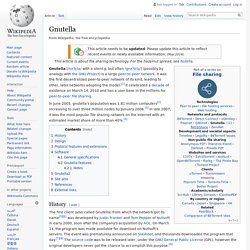 It was the first decentralized peer-to-peer network of its kind, leading to other, later networks adopting the model.[1] It celebrated a decade of existence on March 14, 2010 and has a user base in the millions for peer-to-peer file sharing. In June 2005, gnutella's population was 1.81 million computers[2] increasing to over three million nodes by January 2006.[3] In late 2007, it was the most popular file sharing network on the Internet with an estimated market share of more than 40%.[4] History[edit] The first client (also called Gnutella) from which the network got its name[5][6] was developed by Justin Frankel and Tom Pepper of Nullsoft in early 2000, soon after the company's acquisition by AOL.

On March 14, the program was made available for download on Nullsoft's servers. Comparison of eDonkey software - Wikipedia. From Wikipedia, the free encyclopedia. 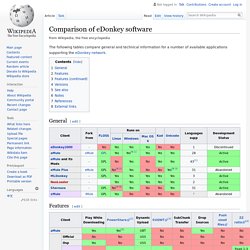