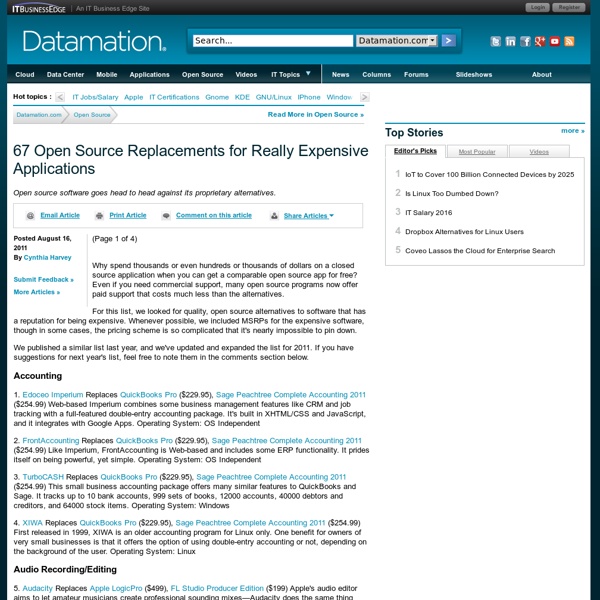 Why spend thousands or even hundreds or thousands of dollars on a closed source application when you can get a comparable open source app for free? Even if you need commercial support, many open source programs now offer paid support that costs much less than the alternatives. For this list, we looked for quality, open source alternatives to software that has a reputation for being expensive. Whenever possible, we included MSRPs for the expensive software, though in some cases, the pricing scheme is so complicated that it's nearly impossible to pin down. We published a similar list last year, and we've updated and expanded the list for 2011. If you have suggestions for next year's list, feel free to note them in the comments section below. Accounting 1. 2. 3. 4. Audio Recording/Editing 5. 6. 7. Business Intelligence 8. 9. 10. 11. 12. Business Process Management 13. 14. 15. Customer Relationship Management 16. Database 17. 18.

15+ Awesome Open Source Graphics Software List Cenon – Cenon is a graphical tool of a special kind. Build upon a modular graphical core, Cenon offers a wide variety of possibilities and applications. The best of all, the Cenon core is free software, available with full source codes, and at home on many computer platforms. It is capable of doing Desktop publishing, vector graphic transformation etc. Dia – Dia is roughly inspired by the commercial Windows program ‘Visio’, though more geared towards informal diagrams for casual use. It can be used to draw many different kinds of diagrams.

Find cleartext passwords in memory dump The Random Access Memory (RAM) is where system components, applications and other data is kept, while the computer is working with it. It is placed there often in clear text for fast access, but there is a security risk involved in this, which is often ignored. In this tutorial, we’ll try dumping the content of the memory to the hard drive and find username and password information stored in the file. Start by logging in to your email, Microsoft account or whatever, to make sure that the information is placed in the memory. You can log out, close your browser afterwards – doesn’t matter. Now we need to dump the memory to the hard drive.

simple - Simple Compiler And Runtime Update: We fixed a couple more problems with the Windows binary distribution. The download file has been updated. Our apologies! Version 0.1.1 also contains a new component for a location sensor. Faceshift: real-time in-game facial expressions using Kinect – Video Games Reviews, Cheats The EPFL Computer Graphics and Geometry Laboratory in Switzerland carries out research in a number of areas including computational symmetry, architectural geometry, shape analysis, geometric art, physics-based animations, and performance capture. It’s that last one we’re interested in today though, as it promises to have a huge impact on video games. The video above shows EPFL’s latest research into performance capture using the Kinect motion controller. It’s called Faceshift, and provides a simple way to translate your own facial expressions on to a game character in real-time. There’s nothing you have to wear for this to happen, just let a Kinect sensor point at your face and the Faceshift system does the hard work.

Building a SaaS Startup in One of the Least Hospitable Places on Earth: Japan For those considering a start-up, the story of Jason Winder’s new venture, MakeLeaps, provides an uplifting educational and inspiring read. Winder came to Japan in 2001 speaking little Japanese and without a college education. Yet with drive, focus and passion, he is now working on his second venture. Winder is an Ichiban Entrepreneur. Winder began working for an IT consultancy shortly after arriving in Japan. Which MacBook Air To Buy? Get The 128GB 11-Inch Model With 4GB of RAM. Here’s Why Today, Apple released new Sandy Bridge MacBook Airs with Thunderbolt ports, backlit keyboards and all-around upped specs. Any MacBook Air you get will, in all likelihood, be the best laptop you’ve ever owned, but how do you know which MacBook Air is right for you? After nine months of using and loving our last-gen MacBook Airs, we know which one we’d recommend to most people: the 128GB 11-inch MacBook Air with 4GB of RAM . Here’s why.