Picnik - Photo editing the easy way, online in your browser 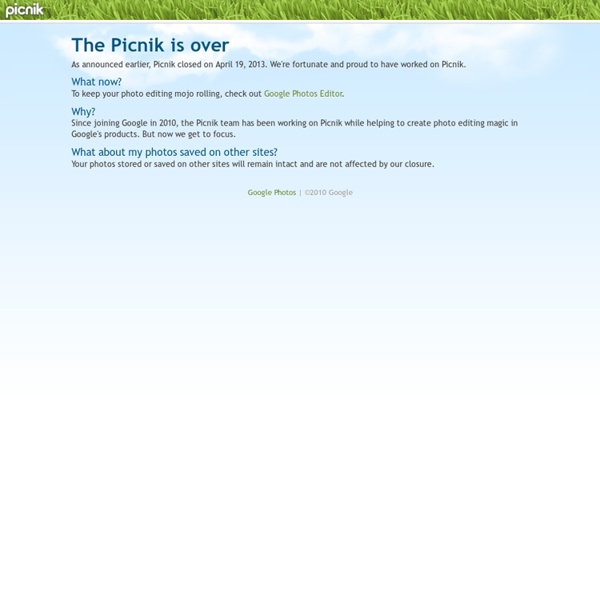 Online Photo Effects cookie barclose This website makes use of cookies to enhance browsing experience and provide additional functionality. None of this data can or will be used to identify or contact you. 12 Sites To Create Slideshows We often go on vacations with family to take some time out of our hectic schedule and have fun with our family. Mostly every time, we click pictures so that we can remember our golden vacations whenever we feel like. It feels great to look at old pictures when we had so much fun in our life. Boy, this is what we feel at the time of clicking pictures that we gonna look at them in the future. The ShellyLib Home Page - Start ShellyLib is a small library to create shapes and textures of seashells and snails. The most prominent applications using ShellyLib are the seashell custom object for The Mops/Ayam and the Shell Laboratory. The Shell Laboratory is real fun to play with. Just drag some sliders and see your changes immediately take effect in a realtime calculated and OpenGL rendered representation of the shell! All shells on these pages (unless stated otherwise) have been rendered with OpenGL in the Shell Laboratory.

World powers rush in to rebuild Libya - Africa As the endgame of the Muammar Gaddafi regime plays out in Libya, members of the international community - from world powers to oil companies - are gathering to discuss their respective roles in the country's future. Decades of partial isolation imposed by Gaddafi have left the oil-rich country's economy reeling from a raft of sanctions and its government in a diplomatic no man's land. The rebel government, or National Transitional Council (NTC), has said it intends to change all that. In comments published on Wednesday in an Italian newspaper, NTC chairman Mustafa Abdel Jalil said the "new" Libya would build "strong relations with other countries, based on mutual respect and co-operation". Going by Wednesday's flurry of diplomatic action, foreign countries appeared eager to reciprocate. Meanwhile, with oil prices hovering near $100 per barrel, foreign entities invested in Libya have a strong incentive to get production back up and running.

DAZ Studio Think of DAZ Studio as a complete virtual photo and film studio. Real-world photo or film projects pose challenges. These begin with scouting for places to shoot, and end when you have all of the images or footage you need. Peter Clifford Online [tweetthis] TIMELINE – 18th JULY 2012 10.14 GMT: In Libya’s first elections since 1965 (but no political parties allowed) and first totally free elections since 1952, a liberal, secular union, the National Forces Alliance, won 39 out of the 80 seats reserved for political parties. A Happy Voter in Libya’s Elections

PhotoTech Tutorials Advertisement Over the recent months we’ve been presenting various showcases of photography – while many readers hated the showcases, most readers found them inspirational and perfect for a lousy workday’s morning. However, what we should have done in the inspirational posts is not just provide you with some inspiration for your work, but also present useful photographic techniques which can help you to achieve optimal pictures for your designs. And as requested by many of you, now it’s time to correct our mistake. KiCadLib: Device and Footprint Library for KiCad This is a collection of electronic device symbols and footprints for KiCad which is used by other projects on open-project.ch. Please leave a comment, if you find this library useful! Download The library can be downloaded from github at

A guide to the eateries of France - travel tips and articles - Lonely Planet - StumbleUpon There's a vast number of eateries in France. Most have defined roles, though some definitions are becoming a bit blurred. Here's a quick guide: Auberge 'Auberge' by Ludo29880. KiCad EDA Software Suite - Kicad EDA - KiCad EDA KiCad is an EDA software suite for the creation of professional schematics and printed circuit boards up to 32 copper layers with additional technical layers. KiCad runs on Windows, Linux and Apple OS X and is released under the open-source GNU GPL v2 free of charge. If you like KiCad or are making a good living using KiCad in your toolset, you should consider donating funds used for development. CERN has put up a place to collect donations which will be used directly to support a developer. With KiCad you can create schematic diagrams and printed circuit board up to 32 copper layers.

ITALY - Tourism in Italy, travel tips, information, italian regions Director : Eugenio Magnani ENIT - The Italian Government Tourist Board 630 Fifth Avenue - Suite 1965 New York, New York 10111 Camera Exposure: Aperture, ISO & Shutter Speed A photograph's exposure determines how light or dark an image will appear when it's been captured by your camera. Believe it or not, this is determined by just three camera settings: aperture, ISO and shutter speed (the "exposure triangle"). Mastering their use is an essential part of developing an intuition for photography. Tiny Eyes TinyEyes will show you how a baby sees an image that you provide. Our baby-vision simulation method is based on scientific studies of infant visual perception. Please remember that this is our best scientific guess about how a baby of a particular age would see the world.

Autodesk Project Pinocchio Recall what I mentioned when Project Pinocchio first launched: We will continue to offer desktop applications bundled into Suites for years to come; however, eventually you are going to want to do everything from your mobile phone or tablet device. Yes we could port our powerful applications to iPhones and the wide variety of flavors of Android devices, attempting to account for the particulars of each one, or we can make our applications available as services from servers in the cloud with lots of CPU power and memory suited to the job. As a step in this direction, the Media & Entertainment (M&E) division asked you to try your hand at character generation using a web-based solution. No download.

its not exactly shut down..its just combined with google now. :) by rifa Jul 6

So bummed that this wonderful resource is now gone..purchased by Google & shut down. by lindawadman Apr 24

Photo editing made fun, quick and easy online & free! by mosaic May 28