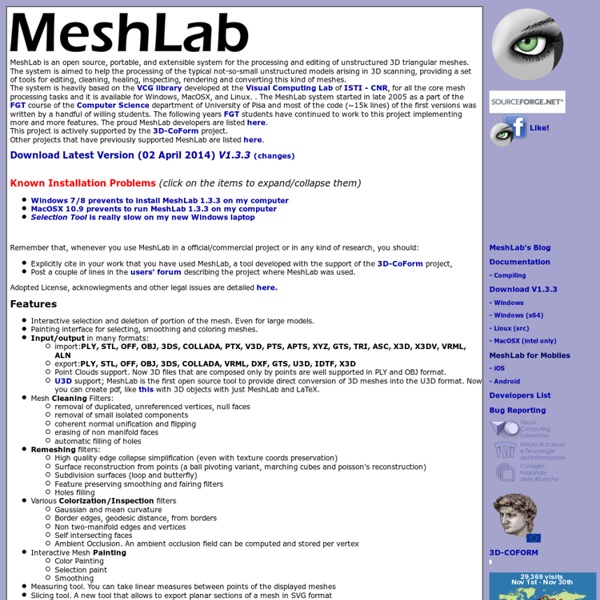 MeshLab is an open source, portable, and extensible system for the processing and editing of unstructured 3D triangular meshes. The system is aimed to help the processing of the typical not-so-small unstructured models arising in 3D scanning, providing a set of tools for editing, cleaning, healing, inspecting, rendering and converting this kind of meshes. The system is heavily based on the VCG library developed at the Visual Computing Lab of ISTI - CNR, for all the core mesh processing tasks and it is available for Windows, MacOSX, and Linux. . The MeshLab system started in late 2005 as a part of the FGT course of the Computer Science department of University of Pisa and most of the code (~15k lines) of the first versions was written by a handful of willing students. The following years FGT students have continued to work to this project implementing more and more features. The proud MeshLab developers are listed here.

Cambridge University Engineering Department - Qi Pan ProFORMA: Probabilistic Feature-based On-line Rapid Model Acquisition Qi Pan, Gerhard Reitmayr and Tom Drummond Proc. BMVC'09, September 2009, London, UK The generation of 3D models is very useful for many computer vision applications. This paper introduces ProFORMA, a system designed to enable on-line reconstruction of textured 3D objects rotated by a user's hand. Partial models are created very rapidly and displayed to the user to aid view planning, as well as used by the system to robustly track the object pose. The system works by calculating the Delaunay tetrahedralisation of a point cloud obtained from on-line structure from motion estimation which is then carved using a recursive and probabilistic algorithm to rapidly obtain the surface mesh.

Architectural applications « Punchcard: VideoTrace VideoTrace allows a user to create models of object from video sequences. There are a number of applications which require models of buildings, including those in architecture and defence. VideoTrace thus enables a user to generate a model of a building or a set of buildings from a video sequence. These sequences can be captured from street level, or from above.VideoTrace uses image data to interpret the user interactions, but exploits 3D point clouds when available, to guide the fitting process.

Studio Basic netfabb Basic is available to anybody, it is free just like in free beer, and runs on Windows, Linux or Mac. netfabb Basic is not just a viewer, it provides mesh edit, repair and analysis capabilities to everyone already being or aspiring to become part of this fantastic, growing, creative, high-tech industry called Additive Manufacturing, Rapid Prototyping or 3D Printing. netfabb Basic is available and is just one click away. Its compact size of only a few megabytes allows a quick download, an easy installation and the handling of STL and slice files within seconds.

Match Photo: Modeling from photos Creating a 3D model to match a photo Use the matching process to create a 3D model to match one or more photos of a building or structure. This process is best suited for making models of images of structures containing features representing parallel lines, such as the top and bottom of a square window. Note: There are several You Tube videos on the Match Photo feature, including two videos that use the same example found in this article. These videos might use an different version of SketchUp, but the process and Match Photo tools are exactly the same. To create a 3D model to match photos of a building or structure:

Active Stereo 1/8/10 - Face Scan A scan of my face! I used Blender 3D to clean the pointcloud and MeshLab to create a surface which we then 3D printed on a Makerbot. If you're interested you can get the pointcloud and STL files here. Match Photo: Introduction Match Photo introduction Use the Match New Photo and Edit Matched Photo menu items to create a 3D model to match a photo or to match an existing 3D model to a photo's context. Activate the Match New Photo and Edit Matched Photo menu items from the Camera menu. SketchUp is commonly used to create designs of buildings or structures. SketchUp allows you to create these designs using the actual, real-world scale (a scale of 1:1 where a unit of measurement in SketchUp represents that actual unit of measurement in the real world).