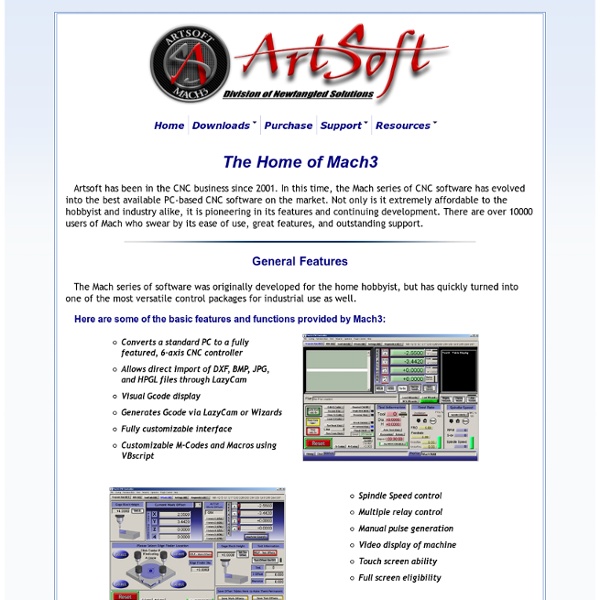 We are a company focused on finding the best solutions for complex issues. We have the ability to design and build machinery, and create software for machinery, creating a complete solution to problems large and small. We offer onsite consulting with our ability to integrate mechanical, electrical, and computerized controls and software. Newfangled Solutions can find and solve the root cause of the problem in a cost effective manner, whether it requires new machinery, small modifications, or process improvement. Our Artsoft USA division of the company focuses on CNC software for all users and markets. We are the home of the very popular MACH series of CNC control software, including MACH3, and the soon to be released MACH4.

LINKS page Links Page Software Hardware Newgroups Plans Routers CNC/CAM software Links: TurboCNC Master5 (Win98) / Mach2 (Win 2000/XP) Deskam EMC (Linux) (requires cable mod) Studio Basic netfabb Basic is available to anybody, it is free just like in free beer, and runs on Windows, Linux or Mac. netfabb Basic is not just a viewer, it provides mesh edit, repair and analysis capabilities to everyone already being or aspiring to become part of this fantastic, growing, creative, high-tech industry called Additive Manufacturing, Rapid Prototyping or 3D Printing. netfabb Basic is available and is just one click away. Its compact size of only a few megabytes allows a quick download, an easy installation and the handling of STL and slice files within seconds. Due to its highly modular design, netfabb Basic includes a variety of useful features while staying the fast and effective viewing application it is meant to be.

Stepper Motors A stepper motor is a brushless, synchronous electric motor that converts digital pulses into mechanical shaft rotation. Every revolution of the stepper motor is divided into a discrete number of steps, in many cases 200 steps, and the motor must be sent a separate pulse for each step. The stepper motor can only take one step at a time and each step is the same size. Since each pulse causes the motor to rotate a precise angle, typically 1.8°, the motor's position can be controlled without any feedback mechanism. As the digital pulses increase in frequency, the step movement changes into continuous rotation, with the speed of rotation directly proportional to the frequency of the pulses. Step motors are used every day in both industrial and commercial applications because of their low cost, high reliability, high torque at low speeds and a simple, rugged construction that operates in almost any environment.

3rd Party Router Kits & Plans Plans & Kits Modular CNC 3-Axis machine. Build your router the way you want it at your own pace! heekscad - Free CAD based on Open CASCADE There is a fork of HeeksCAD at However, I have been working on this Google Code version quite a lot, recently. I have gone back to my older undo code and HeeksCAD is now quicker and easier for me to understand. I have removed constraints. Emc2Arduino Well, after looking around for a good non-blocking multi-instance stepper library that has hooks I can exploit with input speeds from LinuxCNC (a very tall order) I found one that could do it. AccelStepper, so I put my coding hat on, brewed some coffee and banged out rough implementation of HAL2Arduino 0.4 (the preRelease version). For those of you that have been waiting ever so patiently for the next generation of EMC2Arduino, here is the first version of HAL2Arduino that is actually useful to the average end-user. This version has a couple of bug fixes: Bi-directional communications fix.

KiCad EDA Software Suite - Kicad EDA - KiCad EDA KiCad is an EDA software suite for the creation of professional schematics and printed circuit boards up to 32 copper layers with additional technical layers. KiCad runs on Windows, Linux and Apple OS X and is released under the open-source GNU GPL v2 free of charge. If you like KiCad or are making a good living using KiCad in your toolset, you should consider donating funds used for development. CERN has put up a place to collect donations which will be used directly to support a developer.