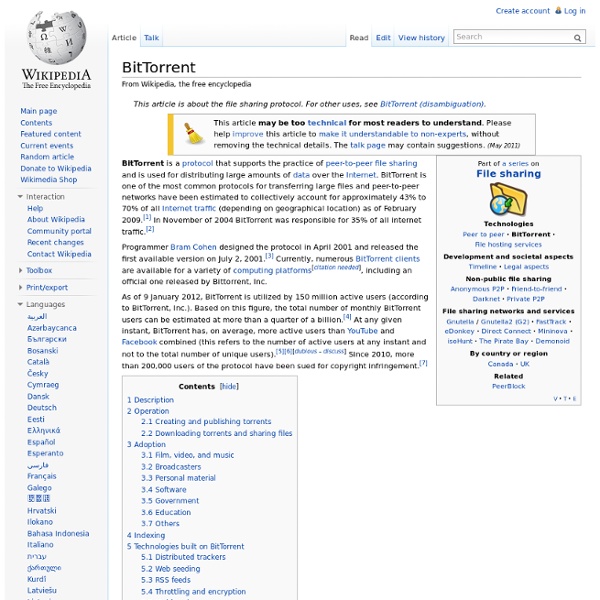 Programmer Bram Cohen, a former University at Buffalo graduate student in Computer Science,[4] designed the protocol in April 2001 and released the first available version on July 2, 2001,[5] and the final version in 2008.[6] BitTorrent clients are available for a variety of computing platforms and operating systems including an official client released by Bittorrent, Inc. As of 2009, BitTorrent reportedly had about the same number of active users online as viewers of YouTube and Facebook combined.[7][8] As of January 2012[update], BitTorrent is utilized by 150 million active users (according to BitTorrent, Inc.). Based on this figure, the total number of monthly BitTorrent users can be estimated at more than a quarter of a billion.[9] Description[edit] The middle computer is acting as a seed to provide a file to the other computers which act as peers. The file being distributed is divided into segments called pieces. When a peer completely downloads a file, it becomes an additional seed.

Direct Connect (protocol) - Wikipedia Hubs feature a list of clients or users connected to them. Users can search for files and download them from other clients, as well as chat with other users. The client-server (as well as client-client, where one client acts as "server") aspect of the protocol stipulates that the server respond first when a connection is being made. For example, when a client connects to a hub's socket, the hub is first to respond to the client. The protocol lacks a specified default character encoding for clients or hubs.

Digital Living Network Alliance The Digital Living Network Alliance (DLNA) is a nonprofit collaborative trade organization established by Sony in June 2003, that is responsible for defining interoperability guidelines to enable sharing of digital media between multimedia devices.[3] These guidelines are built upon existing public standards, but the guidelines themselves are private (available for a fee). These guidelines specify a set of restricted ways of using the standards to achieve interoperability and include almost no free audio formats and only the most common (free or otherwise) video formats, meaning that DLNA servers generally have to support transcoding in order to produce a useful service.[4] DLNA uses Universal Plug and Play (UPnP) for media management, discovery and control.[5] UPnP defines the type of device that DLNA supports ("server", "renderer", "controller") and the mechanisms for accessing media over a network. History[edit] Specification[edit]

Finding Legal (and Free) Torrents Although bittorrent has a reputation for illegally distributing copyrighted content, there is a large, and rapidly growing amount of content in bittorrent that is legally distributable. Much of this is issued under a Creative Commons license which allows you to copy, distribute, advertise and play as long as you give credit to the artist. Some also allow altering for mixes as long as credit is given to the artist. Most of this content is music audio and is from up and coming artists. There are some current movies from independent producers, but most is older movies in the Public Domain. There is some content from mainstream popular music, mostly live concerts, but a few popular artists have released their content over bittorrent.

eDonkey network - Wikipedia The eDonkey Network (also known as the eDonkey2000 network or eD2k) is a decentralized, mostly server-based, peer-to-peer file sharing network created in 2000 by US developers Jed McCaleb and Sam Yagan[1][2][3] that is best suited to share big files among users, and to provide long term availability of files. Like most sharing networks, it is decentralized, as there is not any central hub for the network; also, files are not stored on a central server but are exchanged directly between users based on the peer-to-peer principle. There are many programs that act as the client part of the network. Most notably, eDonkey2000, the original client by MetaMachine, closed-source but freeware, and no longer maintained but very popular in its day; and eMule, a free program for Windows written in Visual C++ and licensed under the GNU GPL. eMule is in constant development and currently represents about 90% of all clients in the eD2k network.[citation needed]

Internet protocol suite The Internet protocol suite is the computer networking model and set of communications protocols used on the Internet and similar computer networks. It is commonly known as TCP/IP, because its most important protocols, the Transmission Control Protocol (TCP) and the Internet Protocol (IP), were the first networking protocols defined in this standard. Often also called the Internet model, it was originally also known as the DoD model, because the development of the networking model was funded by DARPA, an agency of the United States Department of Defense. TCP/IP provides end-to-end connectivity specifying how data should be packetized, addressed, transmitted, routed and received at the destination.

Hypertext Transfer Protocol - Wikipedia The Hypertext Transfer Protocol (HTTP) is an application protocol for distributed, collaborative, hypermedia information systems.[1] HTTP is the foundation of data communication for the World Wide Web. The standards development of HTTP was coordinated by the Internet Engineering Task Force (IETF) and the World Wide Web Consortium (W3C), culminating in the publication of a series of Requests for Comments (RFCs), most notably RFC 2616 (June 1999), which defined HTTP/1.1, the version of HTTP most commonly used today. In June 2014, RFC 2616 was retired and HTTP/1.1 was redefined by RFCs 7230, 7231, 7232, 7233, 7234, and 7235.[2] HTTP/2 is currently in draft form. Technical overview[edit]

Post-WIMP The reason WIMP interfaces have become so prevalent since their conception at Xerox PARC is that they are very good at abstracting work-spaces, documents, and their actions. Their analogous paradigm to documents as paper sheets or folders makes WIMP interfaces easy to introduce to other users.[1] Furthermore their basic representations as rectangular regions on a 2D flat screen make them a good fit for system programmers, thus favouring the abundance of commercial widget toolkits in this style. However WIMP interfaces are not optimal for working with complex tasks such as computer-aided design, working on large amounts of data simultaneously, or interactive games.

Introduction to Network Visualization with GEPHI New tutorial available! A completely new version of this tutorial has been published, with 2 complete and complementary datasets to learn and explore many basic and advanced features of Gephi: To the new tutorial Gephi workshop at University of Bern (photo Radu Suciu) Torrentz Torrentz is a Finland-based[2] meta-search engine for BitTorrent that is run by an individual known as Flippy. It indexes torrents from various major torrent websites and offers compilations of various trackers per torrent that are not necessarily present in the default .torrent file, so that when a tracker is down, other trackers can do the work. It was the second most popular torrent website after The Pirate Bay in 2012.[3] Usage[edit]

File Transfer Protocol - Wikipedia The File Transfer Protocol (FTP) is a standard network protocol used for the transfer of computer files from a server to a client using the Client–server model on a computer network. FTP is built on a client-server model architecture and uses separate control and data connections between the client and the server.[1] FTP users may authenticate themselves with a clear-text sign-in protocol, normally in the form of a username and password, but can connect anonymously if the server is configured to allow it. For secure transmission that protects the username and password, and encrypts the content, FTP is often secured with SSL/TLS (FTPS).

HDMI HDMI (High-Definition Multimedia Interface) is a proprietary audio/video interface for transferring uncompressed video data and compressed or uncompressed digital audio data from an HDMI-compliant source device, such as a display controller, to a compatible computer monitor, video projector, digital television, or digital audio device.[1] HDMI is a digital replacement for analog video standards. HDMI implements the EIA/CEA-861 standards, which define video formats and waveforms, transport of compressed, uncompressed, and LPCM audio, auxiliary data, and implementations of the VESA EDID.[2][3] CEA-861 signals carried by HDMI are electrically compatible with the CEA-861 signals used by the digital visual interface (DVI). Several versions of HDMI have been developed and deployed since initial release of the technology but all use the same cable and connector. History[edit] Specifications[edit] Audio/video[edit]