Extremadura schoolboard’s software deal protested. Advocates of free software are protesting a tender by the school board of the Spanish region of Extremadura requesting proprietary software licences. 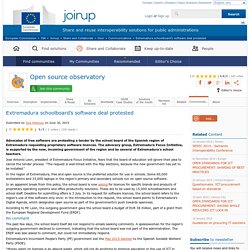 The advocacy group, Extremadura Focus Initiative, is supported by the new, incoming government of the region and by several of Extremadura’s school teachers. Jose Antonio Leon, president of Extremadura Focus Initiative, fears that the board of education will ignore their plea to cancel the tender process. “The request is well-timed with the May elections, because the new government has yet to be installed.” In the region of Extremadura, free and open source is the preferred solution for use in schools. Some 60,000 workstations and 33,000 laptops in the region's primary and secondary schools run on open source software. 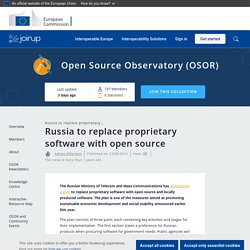 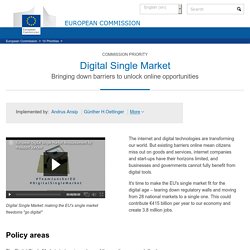 This is even though the EU has spent decades bringing down those barriers "offline". Fragmentation and barriers that do not exist in the physical single market are holding the EU back. In a Digital Single Market, there are fewer barriers, and more opportunities: it is a seamless area where people and business can trade, innovate and interact legally, safely, securely, and at an affordable cost, making their lives easier. But at present, markets are largely domestic in terms of online services. Only 7% of EU small- and medium-sized businesses sell cross-border. The real road to democracy: how open source is sparking a revolution in enterprise. 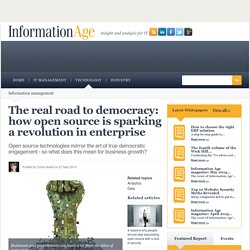 Print this pageEmail article Businesses and governments can learn a lot from the ethos of open source Forget the dotcom bubble burst of the noughties; never before has the promise of a digital economy ranked so highly in the global marketplace. Those who perhaps found themselves out of a job, or facing unprecedented levels of competition for limited employment opportunities after education, have created their own jobs and companies, bringing new found energy and increased competitiveness into the enterprise sector. Minetest. Minetest is an infinite-world block sandbox game and a game engine, inspired by InfiniMiner, Minecraft and the like. 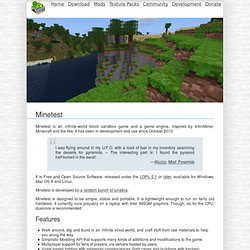 It has been in development and use since October 2010. I was flying around in my U.F.O. with a load of fuel in my inventory searching the deserts for pyramids. – The interesting part is: I found the pyramid half-buried in the sand! Wuzzy, Mod: Pyramids It is Free and Open Source Software, released under the LGPL 2.1 or later, available for Windows, Mac OS X and Linux. OSS is Not Focused on Customer Service. Are you one of those developers who can’t get his/her boss to let you download/prototype/use a Really Cool™ software package that happens to be open-source? 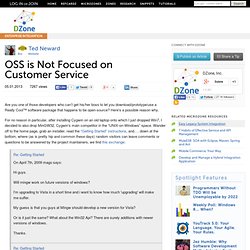 Here’s a possible reason why. For no reason in particular, after installing Cygwin on an old laptop onto which I just dropped Win7, I decided to also drop MinGW32, Cygwin’s main competitor in the “UNIX-on-Windows” space. Wander off to the home page, grab an installer, read the “Getting Started” instructions, and…. down at the bottom, where (as is pretty hip and common these days) random visitors can leave comments or questions to be answered by the project maintainers, we find this exchange: Re: Getting Started On April 7th, 2009 mago says: Hi guys. Will mingw work on future versions of windows? 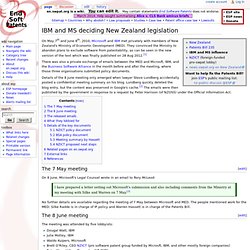 They convinced the Ministry to abandon plans to exclude software from patentability, as can be seen in the new version of the text which was finally published on 28 Aug 2012.[1] There was also a private exchange of emails between the MED and Microsft, IBM, and the Business Software Alliance in the month before and after the meeting, where those three organisations submitted policy documents. Details of the 8 June meeting only emerged when lawyer Steve Lundberg accidentally posted a confidential meeting summary on his blog. Blog Archive » Introducing Scripto: a Tool for Community Transcription. Computadores > PSD e CDS chumbam proposta do PCP que estima poupanças de 50 M€ Foi chumbada esta sexta-feira na Comissão de Orçamento a proposta do Partido Comunista Português que defendia a opção preferencial do Estado por software livre. 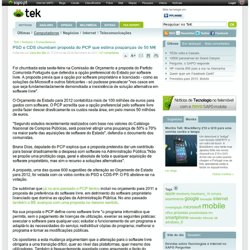