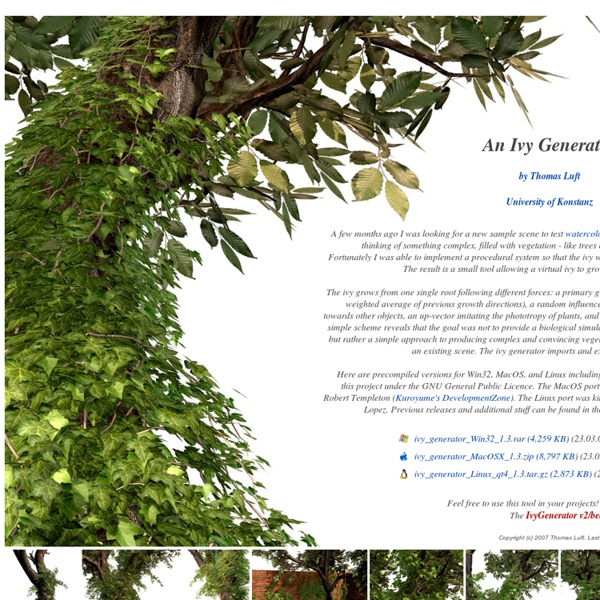 Wings 3D Cinema 4D Tutoriels - Français Creative COW The Hobbit & The Dawn of High Frame Rate Cinema The technology wizards of the film/TV industry have been talking about High Frame Rate cinema for a long time; indeed, Douglas Trumbull's Showscan at 60 fps presaged the current interest over 30 years ago. But it took director Peter Jackson to take the plunge for mainstream cinema, declaring he would shoot The Hobbit in 48 fps to get momentum going. In about a year's time, manufacturers made the gear, theater exhibitors updated their movie theaters, and the studios prepared for one of the most audacious technology debuts that cinema has seen. Editorial, Feature, People / InterviewDebra Kaufman YUI Doc: A New Tool for Generating JavaScript API Documentation We’re pleased today to release the first public version of YUI Doc, a python-based documentation tool that generates API documentation for JavaScript code. YUI Doc was developed by Adam Moore, one of the principal engineers on the YUI project since its inception, to support YUI’s API-level documentation. Those familiar with JavaDoc, JSDoc, or the JsDoc Toolkit (the latter superceded JSDoc, which no longer sees active development) will find YUI Doc’s conventions familiar. YUI Doc’s principal organizational structures are these: Project: The project is the top-level bucket into which a set of documentation is grouped. YUI Doc is most likely to be of interest to those who are building library-style code to be used by other developers. YUI Doc joins YUI Compressor in the portfolio of build-time processes that we’re making available as part of the YUI project. Footnote: We’re hard at work prepping the YUI 2.x and 3.x code repositories for GitHub deployment as well.

Cinema 4D Tutorials and Tools for Motion Graphic Designers Congratulations to Michael Rinnan for winning the Five Second Project for March. His entry had a great concept and was outfitted with excellent lighting, atmosphere, camera movements and sound design. We wanted to know a little bit more about Michael’s entry, so we asked him a few questions regarding his workflow and the process for creating his winning piece. Where do you work? I am a 3D generalist at NFL films in Mt. How did you come up with your concept for the Bright Lights Five Second Project? For my concept, my goal was to come up with a quick story I could tell in 5 seconds. What was the most challenging thing about your project? The most challenging part of this project was honestly the lighting. Tell us a little about how you achieved the zolly (push-pull zoom) effect. To achieve the zolly, I initially mapped out the motion of the motorcycles with a spline and then dropped a camera onto that motion path. What renderer was used? How long did your piece take to make?