13 Of the Best Linux Tutorials and OpenCourseWare on the Web 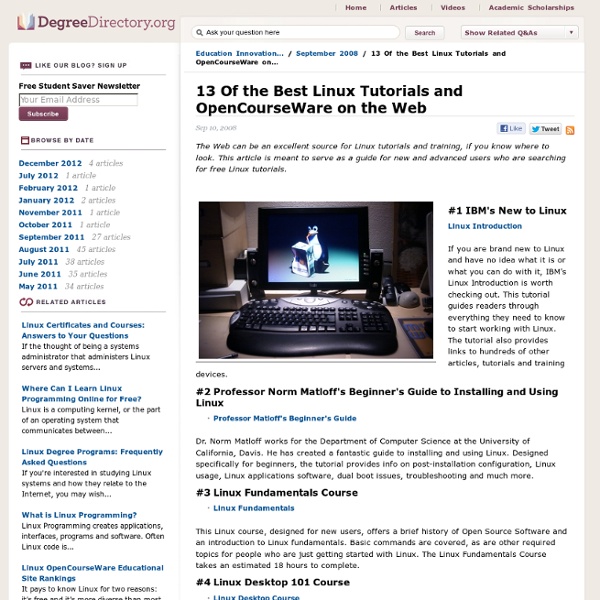 Learn which online sites offer free Linux tutorials and courses. Find these websites ranked below based on the institution's ranking and the amount of material covered for new and advanced Linux users. #1. Cornell University Cornell University's Center for Advanced Computing offers a virtual workshop on Linux. #2. Dr. #3 Southern Methodist University Southern Methodist University's Department of Physics provides a Linux 'driver's ed' tutorial on its website. #4. On the University of Surrey's Department of Electronic Engineering website, you can find eight tutorials that cover Unix and Linux commands, copying files, listing directories and file system security. #5. Dr. #6. You can review an introduction to Linux slide presentation on the New Jersey Institute of Technology's Teaching and Learning Technology group website. #7 IBM's developerWorks IBM developerWorks provides a series of tutorials, which contain everything you need to know to start working with Linux. #8 The Linux Foundation

15 Exercises for Learning a new Programming Language by: Prashant N Mhatre I’ve working knowledge of a bunch of programming languages but job demands to learn a new language frequently in a short time. Instead of reading hundreds manual/book pages, I quickly read 10-15 pages of tutorial or primer. (As you know google is the best search engine to look for such stuff). I keep printed copy of the language syntax reference card handy. (There are many reference cards available over internet. First of all, get familiar with Compiler, compiler option, editor shortcuts or integrated development environment (IDE). To grasp basics of a new language quickly, here are the exercises I use. (1) Display series of numbers (1,2,3,4, 5....etc) in an infinite loop. (2) Fibonacci series, swapping two variables, finding maximum/minimum among a list of numbers. (3) Accepting series of numbers, strings from keyboard and sorting them ascending, descending order. While running the program give value mu = 0. (8) Open a text file and convert it into HTML file.

6 Rules to Work Less and Get More Accomplished - lifehack.org It’s impossible, right? In order to get more done, you need to invest more time. Working ten hour days will make you more accomplished than a colleague that only works seven. Studying three hours a day will get you better grades than the guy who skims through a few chapters before the test. I disagree. Working less and accomplishing more isn’t easy. 1) The 80/20 RuleThe 80/20 rule basically suggests that a small amount of inputs contributes to a much larger amount of outputs. In application, you can’t simply cut everything that doesn’t directly contribute to your bottom line. Cut e-mail time to invest more in larger projects.Say no to people who want commitments that don’t contribute enough value.Spend more studying core concepts and key terms than less important details. 2) Parkinson’s LawParkinson’s Law states that “work will fill the time available for its completion.” Here are some applications: Set a timer for 90 minutes to finish a small project. Work in bursts. The moral?