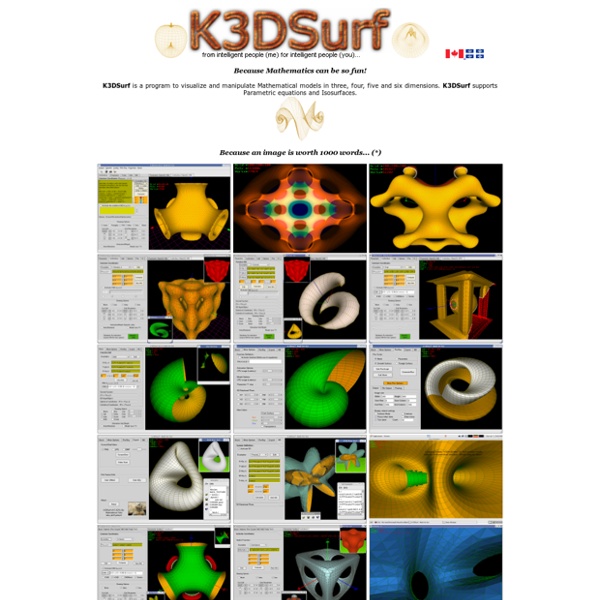 DGPF - Deutsche Gesellschaft für Photogrammetrie, Fernerkundung und Geoinformation e.V. - Home Isosurface An isosurface is a three-dimensional analog of an isoline. It is a surface that represents points of a constant value (e.g. pressure, temperature, velocity, density) within a volume of space; in other words, it is a level set of a continuous function whose domain is 3D-space. Isosurface of vorticity trailed from a propeller blade. Applications[edit] Isosurfaces are normally displayed using computer graphics, and are used as data visualization methods in computational fluid dynamics (CFD), allowing engineers to study features of a fluid flow (gas or liquid) around objects, such as aircraft wings. Numerous other disciplines that are interested in three-dimensional data often use isosurfaces to obtain information about pharmacology, chemistry, geophysics and meteorology. Implementation Algorithms[edit] Marching Cubes[edit] Asymptotic Decider[edit] The asymptotic decider algorithm was developed as an extension to marching cubes in order to resolve the possibility of ambiguity in it,

Defining generative design and its software implementation with nTopology, Frustum, and ParaMatters Breaking announcements in printable materials, hardware, and the latest end-use applications are now standard at major 3D printing conferences. Focusing on the latest parts designed for additive manufacturing, typical explanations for how each was conceived likely include the terms topology optimization, lattice design, and generative design. Although these concepts are well established in an academic sense, their commercial implementation and technical definitions have become the focus of large corporations and startups alike. Driven by greater part manufacturing freedom and a need for efficient generation of optimized designs, the design software world is rising to the challenge with software innovations across CAD, CAM, and CAE applications. nTopology, Frustum, and ParaMatters are three venture-backed startups that are pushing to redefine how parts are designed optimally and efficiently for any manufacturing method. The definition of generative design Looking forward

Polygonising a scalar field (Marching Cubes) Also known as: "3D Contouring", "Marching Cubes", "Surface Reconstruction" Written by Paul Bourke May 1994 Based on tables by Cory Gene Bloyd along with additional example source code marchingsource.cppAn alternative table by Geoffrey Heller.rchandra.zip: C++ classes contributed by Raghavendra Chandrashekara.OpenGL source code, sample volume: cell.gz (old)volexample.zip: An example showing how to call polygonise including a sample MRI dataset.Improved (2018) Qt/OpenGL example courtesy Dr. This document describes an algorithm for creating a polygonal surface representation of an isosurface of a 3D scalar field. There are many applications for this type of technique, two very common ones are: Reconstruction of a surface from medical volumetric datasets. The fundamental problem is to form a facet approximation to an isosurface through a scalar field sampled on a rectangular 3D grid. The indexing convention for vertices and edges used in the algorithm are shown below Another example Source code

3D Printing Introduction 3D printers 3D printing explained A 3D print starts off as a virtual design of the object to be printed. Methods of 3D printing Not every printer used the same technology to construct its prints, several ways of building a print exist and all of those technologies as of 2012 are additive. SLS (Selective Laser Sintering) Wiki website This technology uses a high powered laser to fuse powder made up of plastic, metal, ceramic or glass granulate to create the model. FDM (Fused Deposition Modeling) Fused deposition modeling works by using a plastic filament or metal wire to feed an extruder. SLA (Stereolithography) The technique of stereolithography uses a UV-laser to cure layers of UV-curable photopolymer resin to create layers of the object. Model creation When designing an object for 3D printing, a program used for 3D modeling is used to generate the geometry of the design. Creating a model is possible in a wide variety of CAD programs, in this case we will focus on Rhinoceros. Links

Implicit surfaces Also known as "Metaballs", "Blobbies", "Soft objects" Written by Paul Bourke June 1997 Introduction Most computer based 3D geometric modelling is done with basic primitives such as lines, planes, boxes, etc. Many smooth and deformable objects are difficult or inefficient to represent with such building blocks, even if primitives such as spheres or Bezier/spline surfaces are used. The following summarises three common methods for creating so called "implicit surfaces". Example Consider the field function D(r) = 1/r2 and a number of control points in 3D space. r is the distance of a point in space to a particular control point. For example if there is a single control point different colour levels will result in spheres of different radius. If the control structure is a line or a plane then the distance r is normally taken to be the closest distance to nay point on the line or plane. Blobby Molecules "b" is related to the standard deviation of the curve, "a" to the height. Meta Balls Notes D.

DM Labs - Live Parts INORA - International Newsletter on Rock Art - International Council on Monuments and Sites ICOMOS informs you that, when browsing the ICOMOS website and all the pages of this domain, cookies are placed on the user's computer, mobile or tablet. No cookies are used to track users for commercial or advertising purposes. A cookie is a piece of information stored by a website on the user's computer and that the user's browser provides to the website during each user’s visit. These cookies essentially allow ICOMOS to: facilitate the user’s browsing on the site and activate interactive modules present on the site (required cookies: it is not possible to refuse these cookies if you want to browse the site)to establish statistical analysis of the site’s usage (optional cookies). You will find below the list of cookies used by our website and their characteristics: Cookies created by the use of a third-part service on the website: “_atuvc youtube”: allows us to embed videos on our website from Youtube.

Marching Cubes: Curve Wrapping & More Metaballs - Grasshopper UPDATE: 30-Jan-2014 140130_marching_cubes.gh I have added breps as an input for wrapping geometry (it also can take lines now), as in the above definition. It has been updated for some efficiencies...now you can taper a curve at both ends if you choose, you only need to feed one radius, although you can feed as many as you like (it acts like the longest list component). Some of the work posted lately by Nick Tyrer has gotten me thinking about marching cubes again...I had done some stuff with marching tetrahedra and cubes a ways back, and with some new inspiration (and a little time I could carve out today) I figured I'd take a stab at trying to make it more flexible and robust. The short of it is that the inputs can take any combination of points and curves, along with variable radii of influence for each geometry object. The marching cube stuff is derived from the amazing Paul Bourke's work. G = A list of base Geometry, which can be any combination of curves or points