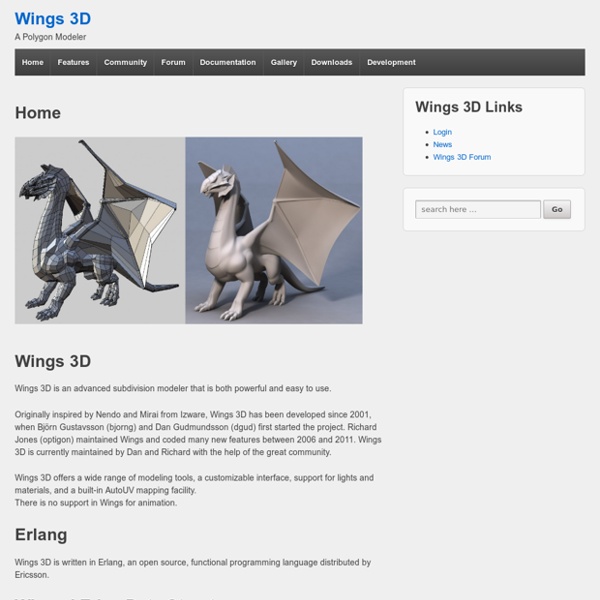 Wings 3D is an advanced subdivision modeler that is both powerful and easy to use. Originally inspired by Nendo and Mirai from Izware, Wings 3D has been developed since 2001, when Björn Gustavsson (bjorng) and Dan Gudmundsson (dgud) first started the project. Richard Jones (optigon) maintained Wings and coded many new features between 2006 and 2011. Wings 3D is currently maintained by Dan and Richard with the help of the great community. Wings 3D offers a wide range of modeling tools, a customizable interface, support for lights and materials, and a built-in AutoUV mapping facility. There is no support in Wings for animation.

Planeta PSD GraphicRiver – 10 Epic Metal Photoshop Styles Datos Archivo: ASL y PSD Peso: 181mb heekscad - Free CAD based on Open CASCADE There is a fork of HeeksCAD at However, I have been working on this Google Code version quite a lot, recently. I have gone back to my older undo code and HeeksCAD is now quicker and easier for me to understand. I have removed constraints. Review: 3D Mice with Blender 2.59 Traditionally, most 3D artists use a keyboard and mouse for all their work; many also use a tablet. However, more and more people are beginning to add 3D mice to their arsenal. 3D mice offer a very natural and easy way to navigate 3D space; giving more precise control than a mouse or keyboard ever can. Today I am reviewing three models of 3D mice offered by 3D Connexion; the Space Navigator, Space Explorer and Space Pilot Pro. Each of 3D Connexion’s models are now supported in Blender as of version 2.59. Along with my rundown of the pros/cons of each device, below you will also find a short video overview demoing how to use a 3D mouse with Blender 2.59. Here is another video, created by Studio Lumikuu that was presented at SIGGRAPH to better describe what a 3D Mouse actually is and how it works:

gcmc - G-Code Meta Compiler Preface Gcmc is a script language to describe the path of a CNC machine as a high-level language. The output of a gcmc script is G-code, which in turn is interpreted by the CNC machine. Alternatively, gcmc can generate both SVG and DXF output for other machines or uses. Gcmc syntax is a mainly procedural language where much of the syntax is borrowed from the C language.

Horizontal Shower by Dornbracht Have you ever had trouble mustering up enough energy to take a shower after a long, hot day at work? Well, the fine engineers at Dornbracht have a solution: the Horizontal Shower. The Horizontal Shower was unveiled at a trade show in Basel, Switzerland recently, and was met with a ton of praise. Studio Basic netfabb Basic is available to anybody, it is free just like in free beer, and runs on Windows, Linux or Mac. netfabb Basic is not just a viewer, it provides mesh edit, repair and analysis capabilities to everyone already being or aspiring to become part of this fantastic, growing, creative, high-tech industry called Additive Manufacturing, Rapid Prototyping or 3D Printing. netfabb Basic is available and is just one click away. Its compact size of only a few megabytes allows a quick download, an easy installation and the handling of STL and slice files within seconds. Due to its highly modular design, netfabb Basic includes a variety of useful features while staying the fast and effective viewing application it is meant to be.

Stereoscopic Rendering in Blender Update: 13. Jun. 2013 Stereoscopic Rendering in Blender 2.6 How to implement an off-axis camera to produce correct stereo pairs via Python Add-on in Blender Since there is no stereoscopic camera in Blender, I decided to write a python script to implement an 'Off-Axis' stereo camera. This script sets the 'Stereo Window' or zero parallax in Blender and not via postproduction. QCAD - Downloads QCAD Downloads Details Last Updated on Monday, 22 August 2016 14:00 Published on Friday, 16 March 2012 20:32 Written by Andrew Mustun 33 Cool Kitchen Pantry Design Ideas What can be stored in a kitchen pantry? Whatever you want: jams, pickles, pastas, sauces, cookbooks, wines, and all other kinds of food that can be stored without a fridge and household supplies. You can even put a washing machine, an iron and an ironing board there if you haven’t a dedicated laundry room. There are many different approaches to the pantry design. For example if it is a separate room it can have doors that make it looks like built-in cabinet or it is simply separated by curtains. The pantry can be part of the kitchen itself.

KiCad EDA Software Suite - Kicad EDA - KiCad EDA KiCad is an EDA software suite for the creation of professional schematics and printed circuit boards up to 32 copper layers with additional technical layers. KiCad runs on Windows, Linux and Apple OS X and is released under the open-source GNU GPL v2 free of charge. If you like KiCad or are making a good living using KiCad in your toolset, you should consider donating funds used for development. CERN has put up a place to collect donations which will be used directly to support a developer.