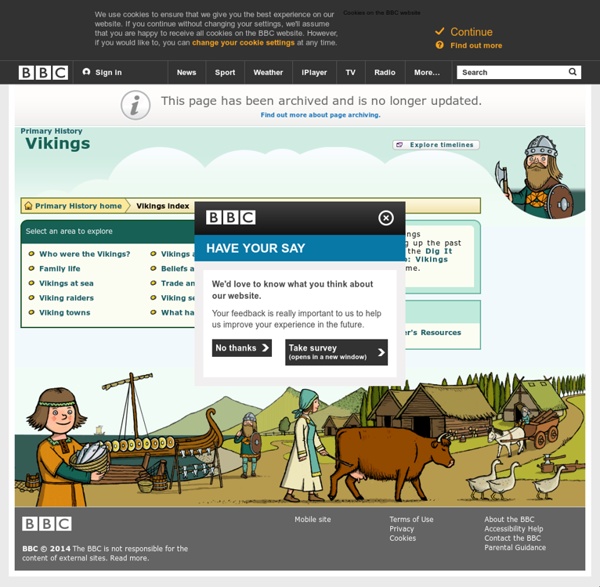 @import '/cs/jst/css/1/ui.css'; @import '/staticarchive/9e4d63c5ac0da0ae80ec2da05421304635896c89.css'; @import '/staticarchive/432180afd23cd5534d44047f359e58fedea0be6f.css'; Cookies on the BBC website We use cookies to ensure that we give you the best experience on our website. We also use cookies to ensure we show you advertising that is relevant to you. If you continue without changing your settings, we'll assume that you are happy to receive all cookies on the BBC website. However, if you would like to, you can change your cookie settings at any time. British Broadcasting Corporation Home Accessibility links This page has been archived and is no longer updated. Primary History Vikings Explore timelines <! Select an area to explore Game: Dig It Up: Vikings Dig up the past in the Dig It Up: Vikings (Needs JavaScript) game. Are you a teacher? Access the Vikings Teacher's Resources area BBC iD Sign in BBC navigation BBC links BBC © 2014 The BBC is not responsible for the content of external sites.

Vikings Homework Help Where did the Vikings settle in Britain? The area eventually settled by Vikings was called the Danelaw. It formed a boundary separating Anglo-Saxon England from Viking England and was defined in a treaty between the English King Alfred and Viking King Guthrum in AD 880. It lay north of Watling Street, a Roman road running from London north-west to Chester and covered northern and eastern England.

The Spanish Armada Publication date: 9th December 2010 by Jon Nichol Spanish Armada Beacon This is a highly interactive and stimulating simulation for years 3 and 4, and a very effective way of involving children in a range of issues. We introduced the story of the Armada, outlining the main parties involved and the nature of the conflict. * 101 Viking Facts from the History Specialists 1. Vikings were very clean people (at least by comparison to other people at the time!). 2. A Viking's most treasured weapon was his sword. They were handed down generations via inheritance, were often named and could be inscribed with runes by talented smiths to magically increase their power. 3.

World War Two (WW2) Homework for Kids For almost six years from 1939 to 1945 Britain fought the toughest war it had ever experienced. World War II was total war - every person, every business, every service was involved. Britain did not fight alone, the war also involved many countries. World War II involved 61 countries with 1.7 billion people, three quaters of the world's population. Fifty million people lost their lives and hundreds of millions people were injured. The Roman Invasion of Britain: When and Why? When did the Romans invade Britain? Over the course of nearly one hundred years, the Romans attempted to invade Britain three times. In 55 B.C. Julius Caesar invaded Britain with two Roman legions. The Romans fought several battles against different Celtic tribes before returning to Gaul (France).In 54 B.C. Caesar returned to Britain with a much larger army.

Collection search Registration numbers The most common type of Museum number begins with the year of acquisition. The database standardises these numbers in the form, for example: 1887,0708.2427 (year: comma: block of four numbers - usually representing a month and day: full-stop and final number). Viking Longships - Children's British History Encyclopedia Many Vikings were good sailors because they lived close to rivers and fjords (sea inlets). They grew up from childhood able to use ships for fishing and travelling. A big Viking longship would be about 30 metres long and were made from overlapping planks of oak wood joined together with iron rivets (bits of metal hammered into holes). Each ship could carry 60 men.

Children and World War Two Children were massively affected by World War Two. Nearly two million children were evacuated from their homes at the start of World War Two; children had to endure rationing, gas mask lessons, living with strangers etc. Children accounted for one in ten of the deaths during the Blitz of London from 1940 to 1941. World War Two was the first war when Britain itself was the target of frequent attacks by the enemy. With the success of the Battle of Britain and the suspension of ‘Operation Sealion’, the only way Germany could get at mainland Britain was to bomb it. Romans for Kids - Homework help The Romans came to Britain nearly 2000 years ago and changed our country. Even today, the ruins of Roman buildings, forts, roads, and baths can be found all over Britain. The Romans invaded other countries too.