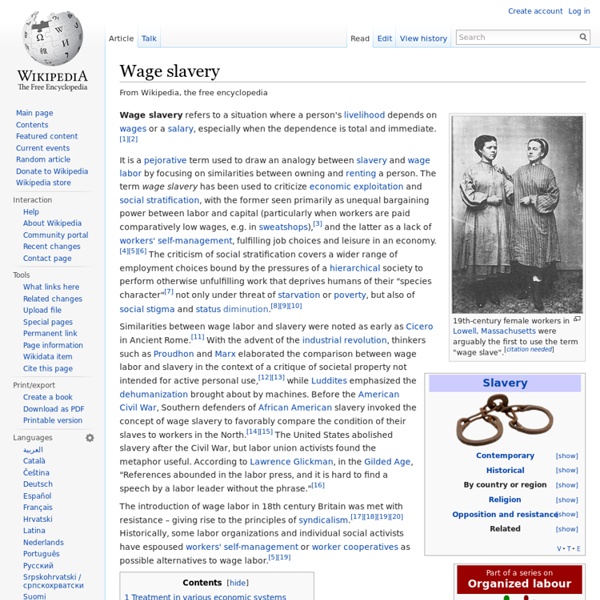 Wage slavery refers to a situation where a person's livelihood depends on wages or a salary, especially when the dependence is total and immediate.[1][2] It is a pejorative term used to draw an analogy between slavery and wage labor by focusing on similarities between owning and renting a person. Similarities between wage labor and slavery were noted as early as Cicero in Ancient Rome.[11] With the advent of the industrial revolution, thinkers such as Proudhon and Marx elaborated the comparison between wage labor and slavery in the context of a critique of societal property not intended for active personal use,[12][13] while Luddites emphasized the dehumanization brought about by machines. Treatment in various economic systems[edit] Adam Smith noted that employers often conspire together to keep wages low:[24] Capitalism[edit] and secondarily on: Communism[edit] Both American and Russian media described the USSR as a communist or socialist society. Fascism[edit] Psychological control[edit]

Political economy In the late 19th century, the term economics came to replace political economy, coinciding with the publication of an influential textbook by Alfred Marshall in 1890.[1] Earlier, William Stanley Jevons, a proponent of mathematical methods applied to the subject, advocated economics for brevity and with the hope of the term becoming "the recognised name of a science."[2][3] Etymology[edit] How Tesla Will Change The World This is Part 2 of a four-part series on Elon Musk’s companies. For an explanation of why this series is happening and how Musk is involved, start with Part 1. A Wait But Why post can be a few different things. One type of WBW post is the “let’s just take this whole topic and really actually get to the bottom of it so we can all completely get it from here forward.” The ideal topic for that kind of post is one that’s really important to our lives, and that tends to come up a lot, but that’s also hugely complex and confusing, often controversial with differing information coming out of different mouths, and that ends up leaving a lot of people feeling like they don’t totally get it as well as they “should.” For example, I kind of got the Iraq situation, but there was a lot of fog there too—so when I wrote a post about it, one fog-clearing rabbit hole took me all the way back to Muhammad in 570AD.

Neo-liberal capture of the policy making process in Europe Mainstream macroeconomics has mounted a range of arguments over the years to argue against any discretionary involvement by governments or regulators in the economy. The claim is always that the ‘market’ will self regulate and weed out bad players and produce the best outcomes with the least resources each period of activity. Various fancy terms are introduced into textbooks that make these arguments seem to have scientific weight. In narratives, there is often claims that left-wing groups blurred as trade unions have too much influence on political processes, particularly when a non-conservative party is in power.

Sociotechnical system Sociotechnical systems (STS) in organizational development is an approach to complex organizational work design that recognizes the interaction between people and technology in workplaces. The term also refers to the interaction between society's complex infrastructures and human behaviour. In this sense, society itself, and most of its substructures, are complex sociotechnical systems. The end of capitalism has begun The red flags and marching songs of Syriza during the Greek crisis, plus the expectation that the banks would be nationalised, revived briefly a 20th-century dream: the forced destruction of the market from above. For much of the 20th century this was how the left conceived the first stage of an economy beyond capitalism. The force would be applied by the working class, either at the ballot box or on the barricades.

Corporate power has turned Britain into a corrupt state If you're under attack, create a diversion. David Cameron and Nick Clegg have been floundering as the spectre of Westminster sleaze has returned to haunt them. Four years after the MPs' expenses scandal engulfed British politics, yet another alleged scam has been exposed. First a Tory MP and then a clutch of greedy peers were caught on camera apparently agreeing to take cash from journalists posing as representatives of foreign companies. "Make that £12,000 a month," grinned Jack Cunningham, Tony Blair's former "enforcer". Cameron and Clegg had promised to deal with parliamentary influence-peddling, and done nothing about it.

Disruptive innovation Sustaining innovations are typically innovations in technology, whereas disruptive innovations cause changes to markets. For example, the automobile was a revolutionary technological innovation, but it was not a disruptive innovation, because early automobiles were expensive luxury items that did not disrupt the market for horse-drawn vehicles. The market for transportation essentially remained intact until the debut of the lower priced Ford Model T in 1908. Our Economic Ruin Means Freedom for the Super-Rich by George Monbiot The model is dead; long live the model. Austerity programmes are extending the crises they were meant to solve, yet governments refuse to abandon them. The United Kingdom provides a powerful example. The cuts, the coalition promised, would hurt but work. They hurt all right – and have pushed us into a double-dip recession. This result was widely predicted.

Nicholas Confessore Nicholas Confessore is a political correspondent on the National Desk of The New York Times.[1] Early life[edit] Confessore grew up in New York City and attended Hunter College High School. TTIP: EU negotiators appear to break environmental pledge in leaked draft The EU appears to have broken a promise to reinforce environmental protections in a leaked draft negotiating text submitted in the latest round of TTIP talks in Miami.. In January, the bloc promised to safeguard green laws, defend international standards and protect the EU’s right to set high levels of environmental protection, in a haggle with the US over terms for a free trade deal. But a confidential text seen by the Guardian and filed in the sustainable development chapter of negotiations earlier this week contains only vaguely phrased and non-binding commitments to environmental safeguards. No obligations to ratify international environmental conventions are proposed, and ways of enforcing goals on biodiversity, chemicals and the illegal wildlife trade are similarly absent. The document does recognise a “right of each party to determine its sustainable development policies and priorities”.