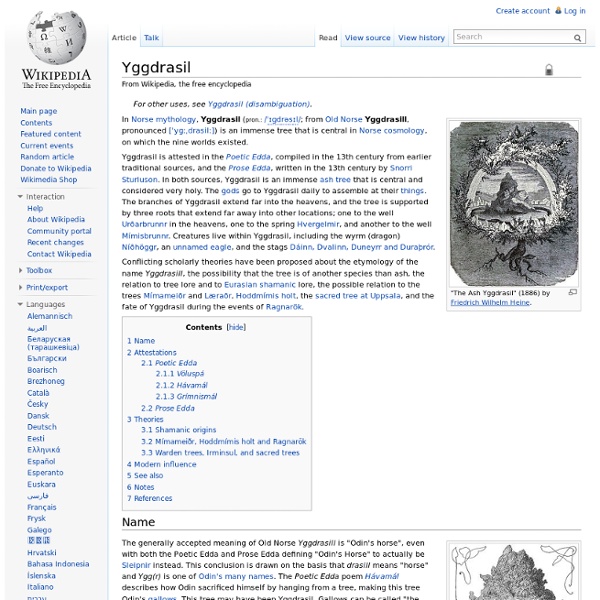 In Norse mythology, Yggdrasil (/ˈɪɡdrəsɪl/; from Old Norse Yggdrasill, pronounced [ˈyɡːˌdrasilː]) is an immense tree that is central in Norse cosmology, in connection to which the nine worlds exist. Conflicting scholarly theories have been proposed about the etymology of the name Yggdrasill, the possibility that the tree is of another species than ash, the relation to tree lore and to Eurasian shamanic lore, the possible relation to the trees Mímameiðr and Læraðr, Hoddmímis holt, the sacred tree at Uppsala, and the fate of Yggdrasil during the events of Ragnarök. Name The generally accepted meaning of Old Norse Yggdrasill is "Odin's horse", meaning "gallows". This interpretation comes about because drasill means "horse" and Ygg(r) is one of Odin's many names. The Poetic Edda poem Hávamál describes how Odin sacrificed himself by hanging from a tree, making this tree Odin's gallows. A third interpretation, presented by F. Attestations Poetic Edda Völuspá Hávamál Grímnismál Prose Edda Theories

Attis Phrygian and Greek god Attis (/ˈætɪs/; Greek: Ἄττις, also Ἄτυς, Ἄττυς, Ἄττης)[1] was the consort of Cybele in Phrygian and Greek mythology.[2] His priests were eunuchs, the Galli, as explained by origin myths pertaining to Attis and castration. Attis was also a Phrygian god of vegetation. The 19th-century identification with the name Atys encountered in Herodotus (i.34–45) as the historical name of the son of Croesus ("Atys the sun god, slain by the boar's tusk of winter")[4] is mistaken.[5] History[edit] At the temple of Cybele in Pessinus, the mother of the gods was still called Agdistis, the geographer Strabo recounted.[7] Sculpture of Attis. As neighboring Lydia came to control Phrygia, the cult of Attis was given a Lydian context too. Julian the Apostate gives an account of the spread of the orgiastic cult of Cybele in his Oratio 5. Archaeological finds[edit] Ancient Roman statue of god Attis found at Ostia, now in the Lateran Museum. Notes[edit] ^ William Smith. References[edit] M.

Horus Egyptian war deity Etymology[edit] Nekheny may have been another falcon god worshipped at Nekhen, city of the falcon, with whom Horus was identified from early on. Horus may be shown as a falcon on the Narmer Palette, dating from about the 31st century BC. Horus and the pharaoh[edit] The Pyramid Texts (c. 2400–2300 BC) describe the nature of the pharaoh in different characters as both Horus and Osiris. The lineage of Horus, the eventual product of unions between the children of Atum, may have been a means to explain and justify pharaonic power. The notion of Horus as the pharaoh seems to have been superseded by the concept of the pharaoh as the son of Ra during the Fifth Dynasty.[7] Origin mythology[edit] Mythological roles[edit] Sky god[edit] Since Horus was said to be the sky, he was considered to also contain the Sun and Moon.[12] It became said[by whom?] As Horus was the ultimate victor he became known as ḥr.w wr "Horus the Great", but more usually translated "Horus the Elder". Her-ur[edit]

Nephthys Egyptian deity She was worshiped as the goddess of mourning, rivers, the night, service, childbirth, mothers, the dead, protection, the home, the hearth, coffins, burial, and air. Etymology[edit] Nephthys – Musée du Louvre, Paris, France Nephthys is the Greek form of an epithet (transliterated as Nebet-het, and Nebt-het, from Egyptian hieroglyphs).The origin of the goddess Nephthys is unclear but the literal translation of her name is usually given as "Lady of the House", which has caused some to mistakenly identify her with the notion of a "housewife", or as the primary lady who ruled a domestic household. Function[edit] Nephthys is regarded as the mother of the funerary-deity Anubis (Inpu) in some myths.[3][4] Alternatively Anubis appears as the son of Bastet[5] or Isis.[6] Less well understood than her sister Isis, Nephthys was no less important in Egyptian Religion as confirmed by the work of E. "Ascend and descend; descend with Nephthys, sink into darkness with the Night-bark.

Ra Ra (;[1] Ancient Egyptian: rꜥ or rˤ; also transliterated rˤw; cuneiform: 𒊑𒀀 ri-a or 𒊑𒅀ri-ia)[2] or Re (; Coptic: ⲣⲏ, Rē) is the ancient Egyptian deity of the sun. By the Fifth Dynasty in the 25th and 24th centuries BC, he had become one of the most important gods in ancient Egyptian religion, identified primarily with the noon sun. Ra was believed to rule in all parts of the created world: the sky, the Earth, and the underworld.[3] He was the god of the sun, order, kings, and the sky. Ra was portrayed as a falcon and shared characteristics with the sky god Horus. All forms of life were believed to have been created by Ra. Religious roles The sun as a creator The sun is the giver of life, controlling the ripening of crops which were worked by man. In the underworld When Ra was in the underworld, he merged with Osiris, the god of the dead.[7] Iconography Figure of Ra-Horakhty, 3rd century BC Ra-Khepri (solar disc and scarab beetle). Ra was represented in a variety of forms. Worship Raet-Tawy

Heracles Origin Many popular stories were told of his life, the most famous being The Twelve Labours of Heracles; Alexandrian poets of the Hellenistic age drew his mythology into a high poetic and tragic atmosphere.[4] His figure, which initially drew on Near Eastern motifs such as the lion-fight, was widely known. Heracles was the greatest of Hellenic chthonic heroes, but unlike other Greek heroes, no tomb was identified as his. The core of the story of Heracles has been identified by Walter Burkert as originating in Neolithic hunter culture and traditions of shamanistic crossings into the netherworld.[5] It is possible that the myths surrounding Heracles were based on the life of a real person or several people whose accomplishments became exaggerated with time.[6] Based on commonalities in the legends of Heracles and Odysseus, author Steven Sora suggested that they were both based on the same historical person, who made his mark prior to recorded history.[7] Hero or god Christian chronology Cult

Georg Friedrich Creuzer Georg Friedrich Creuzer (German: [ˈkʀɔɪtsɐ]; 10 March 1771 – 6 February 1858) was a German philologist and archaeologist. He was born at Marburg, the son of a bookbinder. After studying at Marburg and at the University of Jena, he went to Leipzig as a private tutor; but in 1802 he was appointed professor at Marburg, and two years later professor of philology and ancient history at Heidelberg. He held the latter position for nearly forty-five years, with the exception of a short time spent at the University of Leiden, where his health was affected by the Dutch climate. Creuzer's other works include: See the autobiographical Aus dem Leben eines alten Professors (Leipzig and Darmstadt, 1848), to which was added in the year of his death Paralipomena der Lebenskunde eines alten Professors (Frankfurt, 1858); also Starck, Friederich Kreuzer, sein Bildungsgang und seine bleibende Bedeutung (Heidelberg, 1875). Notes[edit] References[edit]

Harpocrates Harpocrates (Ancient Greek: Ἁρποκράτης) was the god of silence, secrets and confidentiality in the Hellenistic religion developed in Ptolemaic Alexandria (and also an embodiment of hope, according to Plutarch). Harpocrates was adapted by the Greeks from the Egyptian child god Horus, who represented the newborn sun, rising each day at dawn. Harpocrates's name was a Hellenization of the Egyptian Har-pa-khered or Heru-pa-khered, meaning "Horus the Child". Horus[edit] Among the Egyptians, the full-grown Horus was considered the victorious god of the sun who each day overcomes darkness. Steles depicting Heru-pa-Khered standing on the back of a crocodile and holding snakes in his outstretched hands were erected in Egyptian temple courtyards, where they would be immersed or lustrated in water; the water was then used for blessing and healing purposes as the name of Heru-pa-Khered was itself attributed with many protective and healing powers. Ovid described Isis: 20th century reference[edit]

Marsyas In Greek mythology, the satyr Marsyas (; Greek: Μαρσύας) is a central figure in two stories involving music: in one, he picked up the double oboe (aulos) that had been abandoned by Athena and played it;[1][2] in the other, he challenged Apollo to a contest of music and lost his hide and life. In antiquity, literary sources often emphasise the hubris of Marsyas and the justice of his punishment. Family[edit] Mythology[edit] The finding of the aulos[edit] Marsyas and Apollo[edit] In the contest between Apollo and Marsyas, which was judged by the Muses or the Nysean nymphs[13][14] the terms stated that the winner could treat the defeated party any way he wanted. There are several versions of the contest; according to Hyginus, Marsyas was departing as victor after the first round, when Apollo, turning his lyre upside down, played the same tune. Yet another version states that Marsyas played the flute out of tune, and hence accepted his defeat. The wise Marsyas[edit] In later art[edit]

Harpocrates | Hellenic Faith Harpocrates is the God of secrecy, mystery, and silence. Harpocrates is the child of Isis and Serapis, who together form the Alexandrian Triad. He is said to personify the newborn sun each day, the first strength of the winter sun, and the image of early vegetation. Harpocrates is the Hellenic interpretation of Harpa-Khruti (Horus the Child), who is commonly depicted as a younger boy with a finger on His chin held just below His lips. This has a dual symbolization; in Egypt, this symbolizes childhood and the hieroglyph for His name, but in Greece, the gesture is understood as a hush for silence, and as such, He became a favorite deity with the later mystic schools of philosophy. Worship The cult of Harpocrates, as it is known from Alexandria, Memphis, Hermopolis Magna and other cities, likely originated in the rites performed in the mammisi, or “birth-houses”, which were parts of temple complexes where Horus would commonly be worshiped. Harpocrates as Apollo “HARPOKRATES.” Kennedy, Maev.

Gods of Ancient Egypt: Khnum Khnum (Khnemu, Khenmu, Khenmew, Chnum) was one of the most ancient gods of Egypt, whose worship is thought to have been popular as early as the Predynastic Period. References from the Pyramid Texts of Unas confirm that his worship was long established even at that early stage and the Old Kingdom pharaoh Khufu (the builder of the Great Pyramid) was actually called "Khnum-Khufu" ("Khnum is his Protector"). However, it seems that the cult of Ra (or Re) rose to dominance at that time and Khnum was pushed to the sidelines as Khufu's son and grandson (Khaf-Re and Menkau-Re) both took names honouring Ra. Khnum was originally a water god who was thought to rule over all water, including the rivers and lakes of the underworld. He was associated with the source of the Nile, and ensured that the inundation deposited enough precious black silt onto the river banks to make them fertile. As well as creating the body and the "ka" (spirit) of each newborn child, he could bless the child.