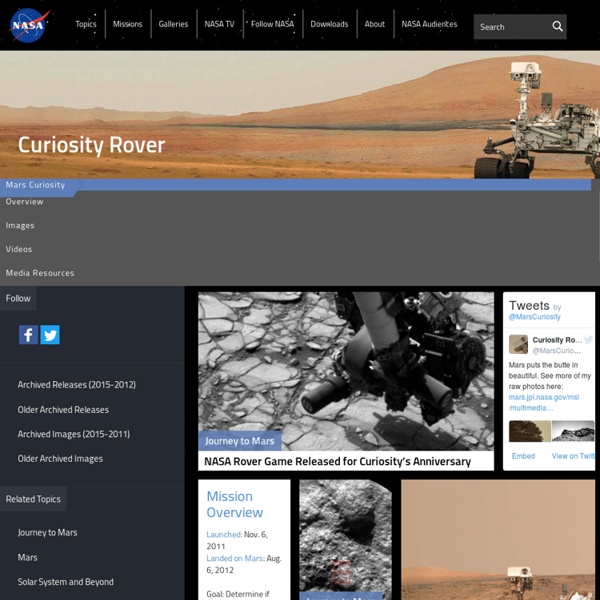 Mars rover Curiosity lands, NASA releases new image and video: ‘The surface mission of Curiosity has now begun’ - Ideas@Innovations 8:23 p.m. - NASA releases short video of Mars rover descent We discovered via io9 this video of the Mars rover Curiosity making its way toward the surface of Mars. The thumbnail images in sequence and taken by the Mars Descent Imager (MARDI) show the rover in the last two-and-a-half minutes of Curiosity’s descent to Mars: 1:13: News briefing ends!

How the first plant came to be The genome of provides essential clues to the origin of photosynthesis in algae and plants. Science/AAAS Earth is the planet of the plants — and it all can be traced back to one green cell. The world's lush profusion of photosynthesizers — from towering redwoods to ubiquitous diatoms — owe their existence to a tiny alga eons ago that swallowed a cyanobacteria and turned it into an internal solar power plant. By studying the genetics of a "glaucophyte" — one of a group of just 13 unique microscopic freshwater blue-green algae, sometimes called "living fossils" — an international consortium of scientists led by molecular bioscientist Dana Price of the University of Queensland, Brisbane, has elucidated the evolutionary history of plants.

SAM: Sample Analysis at Mars on the rover 'Curiosity' The Capabilities Curiosity is the largest, most capable rover ever to be sent to Mars. The size of a small SUV and the height of a professional basketball player, it can roll over rocks that are almost 1 m (~2.5 ft) tall. up to 73 cm (29 in) tall. The two front and back wheels have their own motors, which allow the rover to turn in a complete circle when directed. Welcome to Dylan Wiliam’s website Professional development Finally! The revised Embedding formative assessment pack for schools and colleges to run their own two-year professional development programme on formative assessment is now available worldwide. In Europe, this can be ordered through SSAT, in Australasia through Hawker-Brownlow, and in North America from Learning Sciences International. Further details of the pack are here. Also, a series of high-quality video presentations by Dylan Wiliam, with a total running time of over two and a half hours, is now available world-wide.

Mars orbiter catches pic of Curiosity on its way down! This is truly astonishing: the HiRISE camera on the Mars Reconnaissance Orbiter snapped what may turn out to be the Space Picture of the Year: Curiosity descending to Mars under its parachutes! Holy. Haleakala. The rover is safely tucked inside the backshell, suspended underneath its huge parachute. This image was taken just moments after Curiosity’s speed had dropped from thousands of kilometers per hour to just hundreds. Shortly after that, rockets underneath took over the job of slowing it further, so that the sky crane could lower Curiosity safely to the Martian surface. tracking nanotechnology A team of scientists led by Carnegie's Lin Wang has observed a new form of very hard carbon clusters, which are unusual in their mix of crystalline and disordered structure. The material is capable of indenting diamond. This finding has potential applications for a range of mechanical, electronic, and electrochemical uses. Carbon is the fourth-most-abundant element in the universe and takes on a wide variety of forms—the honeycomb-like graphene, the pencil "lead" graphite, diamond, cylindrically structured nanotubes, and hollow spheres called fullerenes. Some forms of carbon are crystalline, meaning that the structure is organized in repeating atomic units. Other forms are amorphous, meaning that the structure lacks the long-range order of crystals.

Mars Exploration Rovers Skip to main content Loading ... Related Links › Opportunity mission manager reports › Raw images - Opportunity › Raw images - Spirit › JPL Mars Rover site Emerging Social Media Trends In 2012 In my last blog on Emerging Digital marketing trends this year, I mentioned that trends in Social Media deserve a separate post. It has taken me more than three months to have moved from a draft to an actual blog post, and the only thing that has changed is some of what I originally noted can already be seen in the execution. Let us see what the highlights or current trends are. 1) Social Media will move from acquisition to quality of acquisition- If you pay for a click that helps you acquire a fan, you as a brand will start calculating ROI at some point and will soon realise the value of a fan who might actually be interested versus one who is not. This article interestingly points out that the generation loves to endorse their likes & dislikes. These are the users who would actually share content, like your updates, your new products & eventually help you go viral.

Mars Exploration Rover Mission: The Mission SPIRIT UPDATE: Spirit Remains Silent at Troy More than 1,300 commands were radiated to Spirit as part of the recovery effort in an attempt to elicit a response from the rover. No communication has been received from Spirit since Sol 2210 (March 22, 2010). The project concluded the Spirit recovery efforts on May 25, 2011. The remaining, pre-sequenced ultra-high frequency (UHF) relay passes scheduled for Spirit on board the Odyssey orbiter will complete on June 8, 2011. Does Self-Awareness Require a Complex Brain? (Image by David R. Ingham, via Wikimedia Commons) The computer, smartphone or other electronic device on which you are reading this article has a rudimentary brain—kind of.* It has highly organized electrical circuits that store information and behave in specific, predictable ways, just like the interconnected cells in your brain. On the most fundamental level, electrical circuits and neurons are made of the same stuff—atoms and their constituent elementary particles—but whereas the human brain is conscious, manmade gadgets do not know they exist. Consciousness, most scientists argue, is not a universal property of all matter in the universe.

Arms trade? Drug cartels? Now? Bring it on, Google Last Friday, I got an email from HuffPost Live, the Huffington Post's new live broadcast platform, asking if I could participate in a panel discussion on Google and its increasing role in things "not search", ranging from tracking the arms trade around the world to its overall dominance in our Internet lives. The question was, is Google growing in influence faster than our government can keep up and is it stepping into places it shouldn't? More to the point, does Google need regulation and how much are we at risk because of Google's influence?

Ray Bradbury FBI File: Sci-Fi Legend Suspected Of Communist Sympathies Late science-fiction legend Ray Bradbury was actively investigated by the FBI during the 1960s for suspected Communist leanings, according to FBI files released in response to a Freedom of Information Act request by The Huffington Post. Bradbury aroused the suspicion of the FBI due to his outspoken criticism of the U.S. government and the House Un-American Activities Committee (HUAC), which was investigating real and suspected communists in America. In a full-page ad in Variety, Bradbury had denounced the committee’s probes as “claptrap and nonsense” and several informants in Hollywood also voiced their suspicions about the acclaimed writer to the bureau. Bradbury’s suspected activity was reported to the bureau by screenwriter Martin Berkeley, who claimed that science fiction writers were prone to being Communists and that the genre was uniquely capable of indoctrinating readers in Communist ideologies.