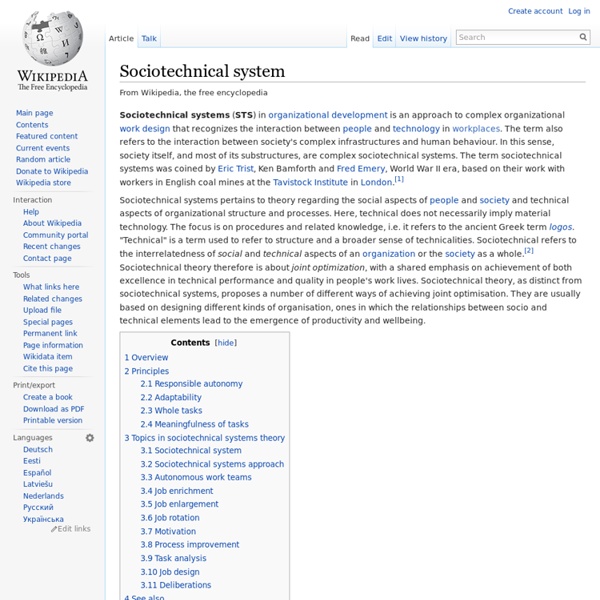 Work design Job design (also referred to as work design or task design) is the specification of contents, methods and relationship of jobs in order to satisfy technological and organizational requirements as well as the social and personal requirements of the job holder.[1] Its principles are geared towards how the nature of a person's job affects their attitudes and behavior at work, particularly relating to characteristics such as skill variety and autonomy.[2] The aim of a job design is to improve job satisfaction, to improve through-put, to improve quality and to reduce employee problems (e.g., grievances, absenteeism). Job characteristic theory[edit] The job characteristic theory proposed by Hackman & Oldham (1976)[3] stated that work should be designed to have five core job characteristics, which engender three critical psychological states in individuals—experiencing meaning, feeling responsible for outcomes, and understanding the results of their efforts. Core job dimensions[edit]

Modernization Science: The Principles and Methods of National Advancement - Chuanqi He AVID Leadership Dr. Sandy Husk, Chief Executive Officer Dr. Sandy Husk joined AVID Center as Chief Executive Officer in January 2014, bringing more than 17 years of experience implementing AVID in the three districts where she has served as superintendent, most recently in Salem-Keizer, Oregon, the second largest district in that state. As superintendent of Salem-Keizer Public Schools in Oregon, her leadership resulted in the implementation of a districtwide strategic plan with an accountability system for all schools and departments. Prior to Salem-Keizer Public Schools, Sandy served five years as the director of schools for the Clarksville-Montgomery County School System in Clarksville, Tennessee. Sandy earned her Ph.D. in Administration, Curriculum & Supervision from the University of Colorado, Denver; her M.A. in Guidance and Counseling from the University of Colorado, Boulder; and her B.S. in Elementary Education from the University of Georgia, Athens. top Mark S. Granger B. Dr. Dr. Dr. Dr. Dr.

Technology transfer and modernization Technique- or technology-transfer is based in many ways on technological and economic paths that were often created by European colonization and have been intensified by Industrialization and Globalization. On the one hand, the modern age is a constantly developing planetary truth, a truth that impacts every society in the world. On the other hand, societies in third world countries have not produced this condition themselves because modernity is an external imposition. A requirement for technological standards and for technology transfer are innovations which constantly promise new development paths and stable institutional settings that can be monitored over a long period. I. Globalization relies also in countries with development on modernization in order to achieve a unified worldwide standard of technology, civilization, culture and world view. Innovative technological development is a part of modernization since the late 18th century in Europe (Irrgang, 2002b). II. III.

Modernization as a Form of Cultural Adaptation to the Environment Modernization as a Form of Cultural Adaptation to the Environment Napoleon Wolanski Each change can be progressive. This is rather a matter of public opinion, the evaluation of this fact. Progress can also be called modernization. Material culture has a practical beginning, as this was a production of the primitive tools. It is not univocal which elements of culture are old-fashioned and which are modern, or which are regressive and which are progressive. Nouveaux riches and parvenus take fashion for progress and modernization. Modernization in the contemporary European and North-American civilization is associated with the elements of urbanization and industrialization processes. Modernization should be associated with the comfort of life. It is important not to oppose modernization to tradition. Evolution and Civilization According to the present state of knowledge the humanization processes occurred in savannas of southern Africa over millions of years ago. Consequences of Development

BBC Systems Practice - Managing Complexity Copyrighted image Credit: The Open University Open2.net fades away... For ten years, give or take, Open2.net was the online home of Open University and BBC programming. Over the last few months, though, we've been moving into OpenLearn, creating one home for all The Open University's free learning content. It means we share a home with the Open University's iTunesU and YouTube channels, and much more besides. You can use the navigation at the top of this page to explore what we have on offer. There's lots to do - you could watch Evan Davis exploring the state of British manufacturing7; explore the frozen planet8; get to know the science and history of the Olympics9 or have a look at our free courses. Most of the content from Open2.net has been brought across; if you've landed here after typing or searching for an Open2.net URL then you're probably looking for something that fitted into one of these categories: Open2 forums We still want you to join in, comment and share your views.