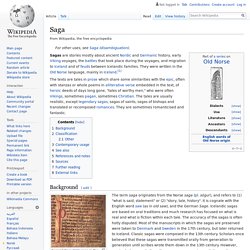 The Scar Gatherer Series. History: Vikings. HISTORY OF THE VIKINGS. Viking Art - History on the Net. Vikings loved elaborate decorations and they decorated many of the things they used: weapons, jewelry, runestones, ship woodwork and even their common, everyday items. 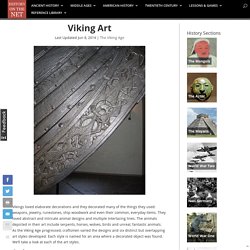 They loved abstract and intricate animal designs and multiple interlacing lines. The animals depicted in their art include serpents, horses, wolves, birds and unreal, fantastic animals. As the Viking Age progressed, craftsmen varied the designs and six distinct but overlapping art styles developed. Each style is named for an area where a decorated object was found. Styles of Art in the Viking Age. Styles of Art in the Viking Age It is customary to divide the sequence of Norse art into six successive styles. 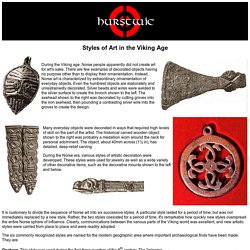 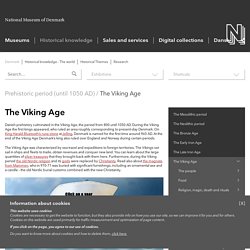 During the Viking Age the first kings appeared, who ruled an area roughly corresponding to present-day Denmark. On King Harald Bluetooth’s rune stone at Jelling, Denmark is named for the first time around 965 AD. Clothes and jewellery. The Viking male often wore a tunic, trousers and a cloak. 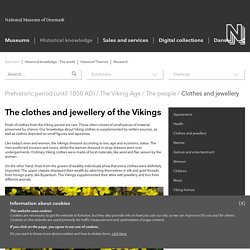 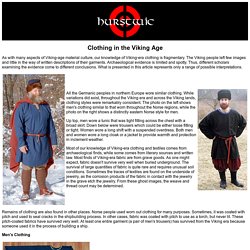 The Viking people left few images and little in the way of written descriptions of their garments. Archaeological evidence is limited and spotty. Thus, different scholars examining the evidence come to different conclusions. What is presented in this article represents only a range of possible interpretations. Remains of clothing are also found in other places. Men's Clothing Silk was also used to trim a tunic, although the cost of imported silk must have limited this kind of trim to only the wealthiest people. One episode in the sagas suggests that tight-fitting clothing was considered showy or ostentatious.

Gísla saga Súrssonar (ch.16) says that Gísli walked one night to the neighboring farm at Sæból dressed in shirt and linen underdrawers, with a cloak over his back. These two episodes (and many others) suggest that linen underwear was worn to bed. Viking Weapons and Ships - How the Vikings Worked. When the Northmen went i viking, they were well-armed and armored. 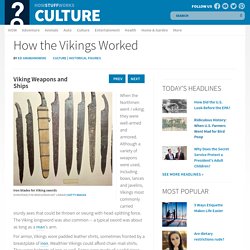 Although a variety of weapons were used, including bows, lances and javelins, Vikings most commonly carried sturdy axes that could be thrown or swung with head-splitting force. The Viking longsword was also common -- a typical sword was about as long as a man's arm. The Old Norse Language and How to Learn It. Ask veit ek standa, heitir Yggdrasill, hár baðmr, ausinn hvíta auri; þaðan koma döggvar, þærs í dala falla, stendr æ yfir grænn Urðarbrunni. 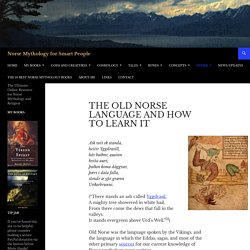 (“There stands an ash called Yggdrasil, A mighty tree showered in white hail. From there come the dews that fall in the valleys. It stands evergreen above Urd’s Well.”[1]) Old Norse language, alphabet and pronunciation. Old Norse was a North Germanic language once spoken in Scandinavia, the Faroe Islands, Iceland, Greenland, and in parts of Russia, France and the British Isles and Ireland.

It was the language of the Vikings or Norsemen. The modern language most closely related to Old Norse is Icelandic, the written form of which has changed little over the years, while the spoken form has undergone significant changes. Vikingsociety - Famous women in Viking culture. Introduction Viking culture had been greatly influenced by women. 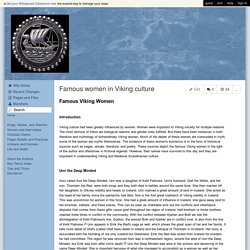 Women were important to Viking society for multiple reasons. The most obvious of these are biological reasons and gender roles fulfilled. 6 Viking Leaders You Should Know - History Lists. This Viking leader, whose origins were either Danish or Norwegian, began conducting raids on France in the ninth century. In 911, under the Treaty of St. Claire-sur-Epte, Charles the Simple, king of the West Franks, gave Rollo part of the area now called Normandy (for Northman’s land) in an effort to have him protect it from other Viking raiders.

Primary History - Vikings - Beliefs and stories. Viking Facts For Children. Primary History - Vikings - Family life. Don’t underestimate Viking women. The viking women were powerful. (Drawing: Erik Werenskiold) “To assume that Viking men were ranked above women is to impose modern values on the past, which would be misleading,” cautions Marianne Moen. She has been studying how women’s status and power is expressed through Viking burial findings. Her master’s thesis The Gendered Landscape argues that viking gender roles may have been more complex than we assume. Exploring new perspectives of Viking society is a theme which also will be the focus of the forthcoming Viking Worlds conference in March 2013, where Moen is a member of the organising committee.

Skewed interpretation. History - Viking Women. What Was Life Like for Women in the Viking Age? - History in the Headlines. There’s been a lot of talk in recent years about the role that women played in the Viking Age. Were they warriors, wielding shields and swords alongside the men? Did they go along on the famous Viking voyages, sailing to places as far flung as Europe, Russia and North America? While in some cases it’s hard to separate myth from reality, it’s clear that Scandinavian women in Viking Age society enjoyed more freedom and power in their communities than many other women of their day.

Recent research even suggests that many more Norse women than previously believed traveled alongside the men on those Viking long boats, suggesting women also played an active role in Viking colonization. While earlier historical research about the Vikings had theorized that the seafaring Norsemen traveled in male-only groups—perhaps due to a lack of desirable mates in Scandinavia—a more recent study tells a very different story. Some women rose to a particularly high status.