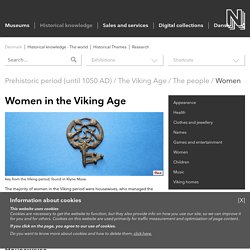 When the Spanish-Arabic traveller al-Tartushi visited Hedeby in the 900s he was surprised to hear that women had the right to divorce if they wished. The sagas involve many divorced women and widows who marry again. The Icelandic sagas describe a large number of divorce rules, which are evidence of a quite advanced legal system. The woman could, for example, demand a divorce if her husband settled in a new country whilst on his travels, but only if the man neglected to go to bed with her for three years.

The aim of this was to secure the wife against a life of loneliness. Female infidelity was punished hard, whilst men were able to bring various mistresses into the home. We do not know how frequent divorces were in the Viking period, but the rights to divorce and inheritance indicate that women had an independent judicial status. Viking Age Locks Keys PDF. Shoesetc. Undefined It’s a shoe. 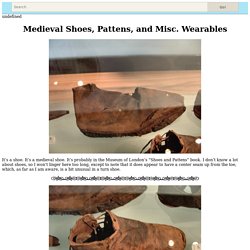 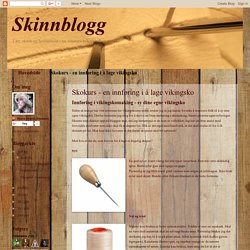 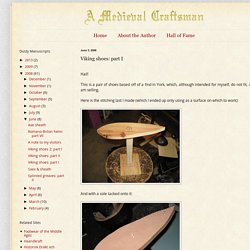 This is a pair of shoes based off of a find in York, which, although intended for myself, do not fit, and which I am selling. Historiska museet. The Swedish History Museum, Stockholm. York Style 4a1 - Sutor - Leatherworking. Ankle shoes with toggle fastening apparently were in use for about 200 years, from around 850 to 1050 AD. 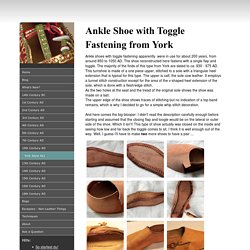 The shoe reconstructed here fastens with a single flap and toggle. The majority of the finds of this type from York are dated to ca. 930 - 975 AD. This turnshoe is made of a one piece upper, stitched to a sole with a triangular heel extension that is typical for this type. The upper is calf, the sole cow leather. It employs a tunnel stitch construction except for the area of the v-shaped heel extension of the sole, which is done with a flesh/edge stitch. As the two holes at the seat and the tread of the original sole shows the shoe was made on a last. The upper edge of the shoe shows traces of stitching but no indication of a top band remains, which is why I decided to go for a simple whip stitch decoration. 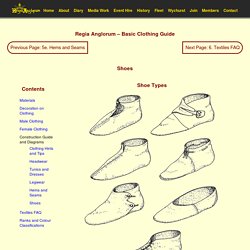 When this is completed the side seam 'A' is stitched together. The shoe is then turned the right way out – and produces a shoe a little like the 4th one above. Medieval Turnshoe by MorganDonner on DeviantArt. Shoes 101. Viking shoes by VendelRus on DeviantArt. New viking shoes by VendelRus on DeviantArt. Beginner Advice for Shoemaking. A Beginner's Addendum to Making Damiana Illaria d'Onde/Elizabeth Jones 21 March 2002 Skiving Butt-Stitching 101 This information is intended for the rooky period shoemaker, and is meant to supplement other instructions available on the Internet. 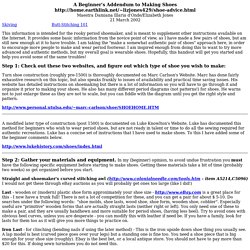 It provides some basic information from the novice point of view, as I have made a few pairs of shoes, but am still new enough at it to have trouble. Annales Historiae: Adventures in Medieval Shoe-Making! (a tutorial) ﻿ A while ago, while browsing Etsy.com, I discovered this beautiful pair of handmade shoes, reproductions of a 9th - 10th century Norse style shoe by Ian at Barefoot Cordwainer. 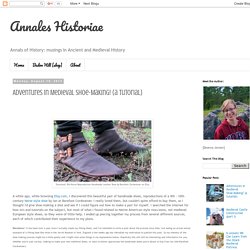 I really loved them, but couldn't quite afford to buy them, so I thought I'd give shoe-making a shot and see if I could figure out how to make a pair for myself. I searched the internet for how-to's and tutorials on the subject, but most of what I found related to Native American style moccasins, not medieval European style shoes, so they were of little help. I ended up piecing together my process from several different sources, each of which contributed their experience to my plans. Chaussures médiévales - Le blog de leonide. Iron age shoes (previous 'viking shoes') - All. Edited to add: Due to alle the comments regarding the title of this instruction, I've changed the name to 'iron age shoes' which might be more historycally correct. 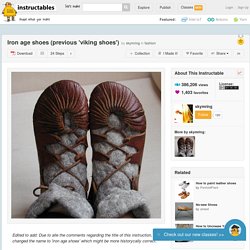 I learned to make these by using my own foot as a template. Therefore, all the measures given here are highly approximate. If your foot diverges a lot from mine (European size 39, long and narrow/slender), some sewing experience might come in handy. That said, there's no reason to be too specific in making these. As you can see, the 'laces' can be loosened or tightened to fit, and the basic idea is really very simple. Guide to Viking turnshoes.