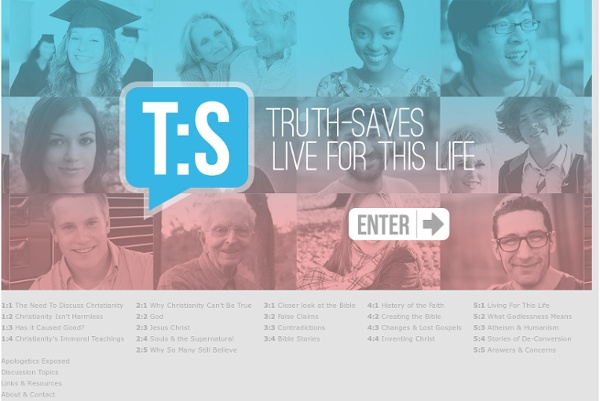 The Atheist Dawn Evolution Here then is the beta version of my strip about evolution. This is a chapter of the book Science Stories which will be out from Myriad Editions next spring. I'm sure there'll be mistakes here, so do feel free to point them out, so that I can make the necessary changes. Thank you. Note Oct 2013. Unfollowing Jesus - Poking Fun At Religion With A Really Big Stick

Why Atheism? Just about everyone is an atheist when it comes to other gods — the gods that other people believe in or that nobody believes in anymore. I’m an atheist about all gods because there's no reliable evidence for any god, or even for Jesus. There is also extensive evidence that Jesus and all gods are fictional characters — myths created mainly by people who had little understanding of how our universe operates. Let’s start with a quick experiment. Drop one coin and watch it fall. If you were to the release third coin, what do you think would happen? Our understanding of the world around us, and our abilities to predict what will happen are based on naturalism — the basis of science. To be explicit, modern science relies on methodological naturalism. In “Cosmos” Neil deGrasse Tyson explained the basic rules of science. Dr. OK, let’s do another experiment. Galileo and Empirical Science Around 1600, Galileo had a new idea for his culture. “Empirical” is a word that I'll be using a lot. Dr.

I Think Therefore I am an Atheist | Atheist Foundation of Australia Inc This heading is a compilation of the words of René Descartes and my partner Lee. A mixture of aged wisdom and contemporary thought that goes very well together indeed. René of course meant that because he can think, he therefore must exist to be able to do so. Lee goes a little further, stating that the end result of rational thinking has to conclude that the existence of a god is only an unproven and unprovable concept. Put very simply, that is what all supernatural notions are. The critical thinking that is required to conclude there is no God is remarkably simple. If one presumes we are special creatures of a creator, that assumption implicitly places us hierarchically above other animal species with separation from them. The Godly then follow this line of thinking, with us as the end result of evolutionary processes. All creatures specialize in some way to maximise survival. Humans can be very logical but more often than not are swayed from its use by many traps.

Logical Fallacies and How to Spot Them Logical Fallacies and How to Spot Them In the Evolution vs. Creationism debate, it is important to be able to spot all the logical fallacies that Creationists tend to throw around. This essay covers many bare essentials of logical thinking, as well as ways to critically evaluate an argument. The logical fallacies listed here are the ones most often used by Creationists, although Creationists have, to date, used almost every single logical fallacy in existence to "prove" their case. Each fallacy will have its own little paragraph, describing it, why it is fallacious and how to counter it. THE STRAWMAN ATTACK: The strawman is, perhaps, the most heavily-employed tactic used by Creationists. "Evolution is a ridiculous theory! This is an example of a strawman attack. Spotting a strawman attack isn't that hard. Strawman attacks, once exposed for what they are, are not all that difficult to counter. THE FALSE DILEMMA FALLACY: The false dilemma is at the heart of the Creationist argument.

Bible Absurdities: Absurdities in the Bible Links to other articles in this series: Key to Abbreviations Introduction to the Bible and Biblical Problems Fatal Bible Flaws? Bible Atrocities Bible Inconsistencies: Bible Contradictions? Bible Precepts: Questionable Guidelines Bible Vulgarities NOTE: These lists are meant to identify possible problems in the Bible, especially problems which are inherent in a literalist or fundamentalist interpretation. GE 1:1 "In the beginning God created the heaven(s) and the earth." (Note: Some biblicists contend that biblical chronology fixes the date of creation at 4004 B.C. thereby making the earth about six thousand years old. GE 1:3-5, 14-19 There was light ("night and day") before there was a sun. GE 1:12, 16 Plants began to grow before there was sunlight. GE 1:29 Every plant and tree which yield seed are given to us by God as good to eat. GE 2:15-23, 3:1-5, 1TI 2:14 Eve was created after Adam had already been given the prohibition about eating the forbidden fruit.

Bay of Fundie Dangerous Talk CoffeeGhost Textbook disclaimer stickers This post is for people tracking the bizarre ethical slide of The Consortium for Plant Biotechnology Research, Inc. (CPBR). As you probably know from my earlier posts, CPBR sends out a yearly invitation to plant biotechnology researchers to submit grant proposals. Because I happen to have an official copyright registration on my poster design page, the PDF is in violation of U.S. copyright law. So here’s what I’ve done. I’ve asked every member university to delete the PDF when received from CPBR. All of the above could have been avoided if CPBR simply linked to my Designing Conference Posters page. “Yet the politics of shipwreck can be avoided, I think, if we can construct a theory of feminist criticism within the framework of a general theory of the critical process that is neither purely objective nor purely intuitive; in that way, its processes can be examined beside, compared with, and contrasted to other branches of criticism with some degree of dispassionate distance.”