Americans United for Separation of Church and State 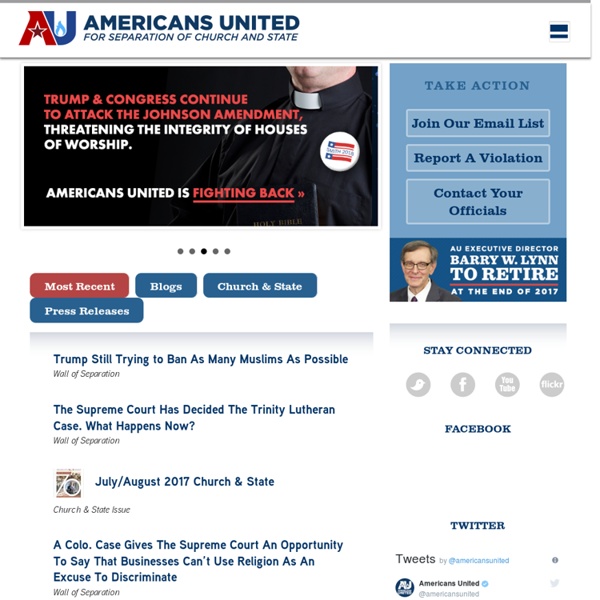 Skeptic » Home » The Skeptics Society &asmp; Skeptic magazine The Out Campaign - Welcome Council for Secular Humanism Evil Bible Home Page Michael Shermer Secular Student Alliance: Atheists, Humanists, Agnostics & Others | Home - Freedom From Religion Foundation Flying Spaghetti Monster The Flying Spaghetti Monster (FSM) is the deity of the Church of the Flying Spaghetti Monster or Pastafarianism, a movement that promotes a light-hearted view of religion and opposes the teaching of intelligent design and creationism in public schools.[3] Although adherents describe Pastafarianism as a genuine religion,[3] it is generally seen by the media as a parody religion.[4][5] The "Flying Spaghetti Monster" was first described in a satirical open letter written by Bobby Henderson in 2005 to protest the Kansas State Board of Education decision to permit teaching intelligent design as an alternative to evolution in public school science classes.[6] In that letter, Henderson satirized creationist ideas by professing his belief that whenever a scientist carbon-dates an object, a supernatural creator that closely resembles spaghetti and meatballs is there "changing the results with His Noodly Appendage". History Internet phenomenon Positions Creation Afterlife Pirates and global warming