EyeWitness To The Middle Ages and Renaissance 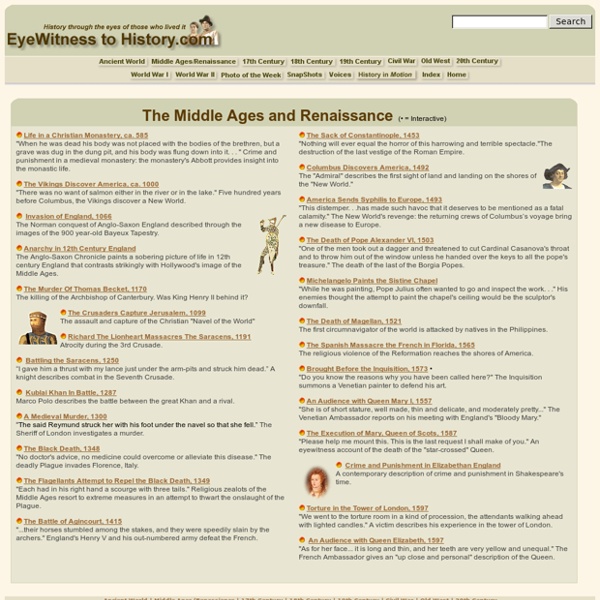 Life in a Christian Monastery, ca. 585"When he was dead his body was not placed with the bodies of the brethren, but a grave was dug in the dung pit, and his body was flung down into it. . . " Crime and punishment in a medieval monastery: the monastery's Abbott provides insight into the monastic life. The Vikings Discover America, ca. 1000"There was no want of salmon either in the river or in the lake." Five hundred years before Columbus, the Vikings discover a New World. Invasion of England, 1066The Norman conquest of Anglo-Saxon England described through the images of the 900 year-old Bayeux Tapestry. Anarchy in 12th Century EnglandThe Anglo-Saxon Chronicle paints a sobering picture of life in 12th century England that contrasts strikingly with Hollywood's image of the Middle Ages. The Murder Of Thomas Becket, 1170The killing of the Archbishop of Canterbury. The Crusaders Capture Jerusalem, 1099The assault and capture of the Christian "Navel of the World"

Germanic History ROLL Reunion Ancient Customs of the Germans - Victory feast after a battle. Germanic Tribes. Up to the last century, it was a widely held belief that German history began in the year A.D. 9. That was when Arminius, a prince of a Germanic tribe called the Cherusci, vanquished three Roman legions in the Teutoburg Forest (southeast of modern-day Bielefeld). Europe Medieval Europe Web Sites BBC: Middle Ages This extensive BBC offering presents the Middle Ages as a period of “massive social change, burgeoning nationalism, international conflict, terrible natural disaster, climate change, rebellion, resistance and renaissance.” The site is essentially a series of extended essays by various academics accompanied by related images.There are seven main sections: Overview; Henry II; John and Richard; Hundred Years War, The Black Death, Richard II, House of Lancaster and York; and Art & Architecture. A useful introduction to the period, though lacking in user interactivity. British Library: Illuminated Manuscripts This section of the British Library presents over 3,000 images from key manuscripts of the 8th to 15th centuries.

Plague, Plague Information, Black Death Facts, News, Photos Plague is a bacterial infection found mainly in rodents and their fleas. But via those fleas it can sometimes leap to humans. When it does, the outcome can be horrific, making plague outbreaks the most notorious disease episodes in history. Most infamous of all was the Black Death, a medieval pandemic that swept through Asia and Europe. A Glossary of European Noble, Princely, Royal and Imperial Titles Outline. 1. Introduction. 2. Sovereigns and Sovereignty. 3. Nobles and Nobility. 4. Maps The section of the Sourcebook is devoted to copy-permitted maps and images. These images can be used in teaching, and in web page creation. The source of images is indicated for each image.

Medieval History Medieval History Web Sites Turning the Pages Turning the Pages is an award-winning interactive display system developed by The British Library to increase public access and enjoyment of some of its most valuable treasures. Visitors are able to virtually “turn” the pages of manuscripts in a realistic way, using touch-screen technology and animation. There are currently fifteen treasures on display in Turning the Pages and several coincide with the Medieval period: Pinnacle of Anglo-Saxon Art depicts the priceless Lindisfarne Gospels, one of the most magnificent manuscripts of the early Middle Ages. The Lisbon Hebrew Bible depicts Jewish cultural life in Portugal prior to expulsion and forced conversions in December 1496. The Sherborne Missal is the largest, late medieval service book to have survived the Reformation intact.

RMC - Collections > Rare Book & Manuscript Collections > European History & Culture > The Rhaeto-Romance Collection The Rhaeto-Romance Collection, like the Fiske Icelandic Collection and the Dante and Petrarch collections, is a bequest of Daniel Willard Fiske, Cornell's first university librarian and a singularly energetic book collector. The term Rhaeto-Romance describes a group of closely related dialects rather than a coalesced, national language. The dialect caught the interest of Willard Fiske while he was on an expedition to the baths of Tarasp in the Lower Engadine. A chance sighting of texts in the Rhaeto-Romance language led to several purchasing excursions throughout the Alpine valleys of Switzerland, Germany, Austria and Italy, with the result that in "little more than five weeks," the collection as it has come to Cornell was virtually complete. The printed catalogue of the Rhaeto-Romance collection divides the holdings into Literature (including numerous religious works), History, Philology and Description. Related Online Resources

A Medieval Atlas By Melissa Snell Nothing helps bring the past into focus quite like a well-executed map. Here at the Medieval History site, I've provided some maps depicting parts of the world as it was during the Middle Ages. There are also many more maps available on the web.

LUTHER – TEACH WITH MOVIES Students will have a vivid image of the sale of indulgences by the Catholic Church in the middle ages. The abuses involved in the sale of indulgences was one of the main reasons for the break with Rome that became the Protestant Reformation. The first clip shows Martin Luther going to Rome and purchasing an indulgence for a relative. Illuminated Manuscripts Manuscripts from the 8th to the 15th century Before the introduction of printing to Western Europe during the mid-15th century, all books were written by hand. The Latin for hand, ’manus’, and for writing, ’scriptum’, give us the word manuscript. Anglorum - A Brief History of Anglo-Saxon England The Anglo-Saxon settlement of England was no overnight affair. The late-Roman army had many Germanic elements and from the fourth century they and their families had settled in Britain. It is, therefore, not surprising that after the withdrawal of the legions at the beginning of the fifth century individual towns looked to Germanic mercenaries to maintain their security.