* 101 Viking Facts from the History Specialists. 1. 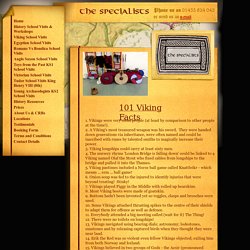 Vikings were very clean people (at least by comparison to other people at the time!). 2. A Viking's most treasured weapon was his sword. They were handed down generations via inheritance, were often named and could be inscribed with runes by talented smiths to magically increase their power. 3. 4. 5. Fun Facts on Vikings for kids *** Fun Facts on Vikings for KidsLooking for help with homework and school? 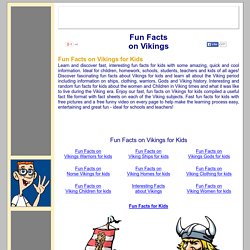 Vikings homework help. The Vikings wanted new land because the places where they came from in Scandinavia – Norway, Sweden and Denmark – weren’t very easy to live on. 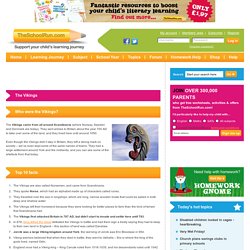 It was hard to grow crops, which meant there wasn’t a lot of food as the population got bigger. Britain and Europe had plenty of good farmland, so the Vikings tried to claim some of that land for themselves. Even though the Anglo-Saxons were pretty well established in England, the Vikings would turn up every now and then to raid towns and take a bit of land. Sometimes, instead of fighting the Vikings, the Anglo-Saxons decided it was better to pay them money so they’d stay away. This payment was called Danegeld. The first Viking attack on England was in 787 on the Isle of Portland. The Vikings believed in many different gods, and they thought making sacrifices to the gods kept them all happy. Thor, the god of thunder Idun, the goddess of spring Odin, the king of gods and the god of war Viking warriors were very good fighters. Primary History - Vikings. Viking Longships - Children's British History Encyclopedia.

Many Vikings were good sailors because they lived close to rivers and fjords (sea inlets). 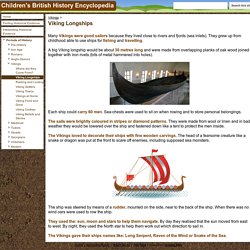 They grew up from childhood able to use ships for fishing and travelling. A big Viking longship would be about 30 metres long and were made from overlapping planks of oak wood joined together with iron rivets (bits of metal hammered into holes). Each ship could carry 60 men. Sea-chests were used to sit on when rowing and to store personal belongings. The sails were brightly coloured in stripes or diamond patterns. The Vikings loved to decorate their ships with fine wooden carvings. The ship was steered by means of a rudder, mounted on the side, near to the back of the ship. 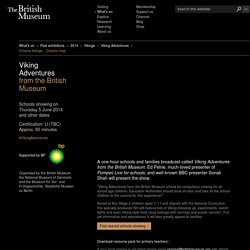 Ed Petrie, much-loved presenter of Pompeii Live for schools, and well-known BBC presenter Sonali Shah will present the show. "Viking Adventures from the British Museum should be compulsory viewing for all school age children. Education Authorities should book en-bloc and take all the school children to the cinema for this experience! " Aimed at Key Stage 2 children aged 7–11 and aligned with the National Curriculum, this specially produced film will feature lots of Viking dressing up, experiments, sword fights and even Viking-style food (food tastings with herrings and purple carrots!). Fun yet informative and educational, it will also greatly appeal to families.

Download resource pack for primary teachers If your local cinema is not listed please email cinema@britishmuseum.org with details and we will contact them. Vikings. The Vikings - Britons, Gaels, Picts, Angles and Vikings. The Vikings were Norsemen who came to raid and pillage, to trade and to settle in Scotland. 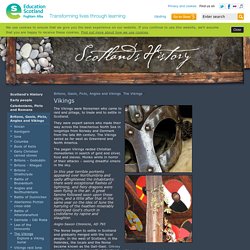 They were expert sailors who made their way across the treacherous North Sea in longships from Norway and Denmark from the late 8th century. The Vikings sailed as far west as Greenland and North America. The pagan Vikings raided Christian monasteries in search of gold and silver, food and slaves. Monks wrote in horror of their attacks – seeing dreadful omens in the sky.

In this year terrible portents appeared over Northumbria and sadly affrightened the inhabitants: there were exceptional flashes of lightning, and fiery dragons were seen flying in the air. Anglo-Saxon Chronicle, AD 793 The Norse began to settle in Scotland and gradually merged with the local people. Before the Vikings came as raiders their ancestors were probably traders who visited Scotland. The Vikings. Vikings. Primary: KS2 History: The Vikings teaching resources.