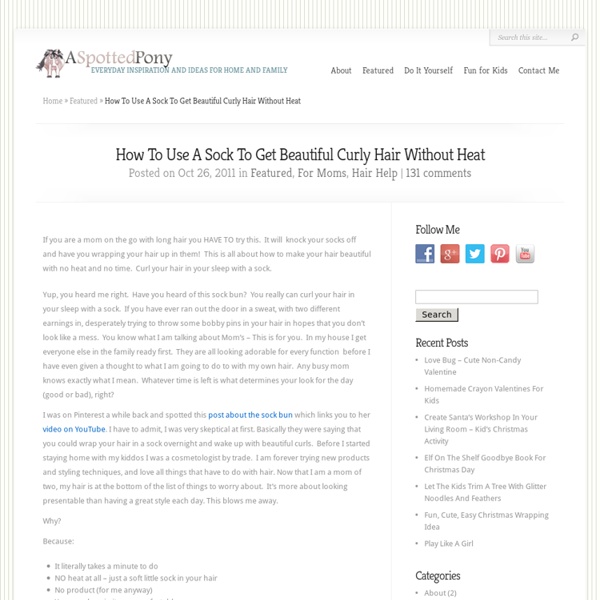 If you are a mom on the go with long hair you HAVE TO try this. It will knock your socks off and have you wrapping your hair up in them! This is all about how to make your hair beautiful with no heat and no time. Curl your hair in your sleep with a sock. Yup, you heard me right. Have you heard of this sock bun? I was on Pinterest a while back and spotted this post about the sock bun which links you to her video on YouTube. Why? Because: It literally takes a minute to doNO heat at all – just a soft little sock in your hairNo product (for me anyway)You can sleep in it very comfortablyIt works Marvelously and is simple beautiful This is the sock bun before and after of my hair. Here are the step by step instructions on how to make this work. First steal a sock from your husband’s dress sock collection (that is what I did anyway). Now roll the sock into a ring. Put your dry hair into a high ponytail. Now spritz just the hair in your ponytail with water. This is my new go-to styling technique.

Women of All Red Nations The best-known Native American women's organization of the 1970s was Women of All Red Nations (WARN). WARN was initiated in 1978 by women, many of whom were also members of the American Indian Movement which was founded in 1968 by Dennis Banks, George Mitchell, and Mary Jane Wilson, an Anishinabe activist. (12) WARN's activism included fighting sterilization in public health service hospitals, suing the U.S. government for attempts to sell Pine Ridge water in South Dakota to corporations, and networking with indigenous people in Guatemala and Nicaragua. (13) WARN reflected a whole generation of Native American women activists who had been leaders in the takeover of Wounded Knee in South Dakota in 1973, on the Pine Ridge reservation (1973-76), and elsewhere. WARN, like Asian Sisters and Hijas de Cuauhtemoc, grew out of--and often worked with--mixed-gender nationalist organizations.1 Check out their website:

How to Make an Easy Winter Hand Salve (aka Eczema Fighting Lotion) My new e-booklet is just out: Simple Handcrafted Body Care. If you like this recipe, you’re going to love the booklet! About three weeks ago our daughter (still so strange to say ‘daughter’ after 6 years of having only boys!) started developing eczema, just like our boys did as babies. Our oldest didn’t have it all that bad, just around his ankles and elbows, our second son had it much worse. He had it all over his face, arms and legs.

Hair Tutorial: The Perfect Mermaid Curls Although “perfect” is a relative term, this method for curling hair is pretty much perfect by my standards, mostly because it isn’t fussy. While I’m a sucker for both ringlets and Californian waves, I like my own curls somewhere in between: relaxed but bouncy. Mermaid-like. How To Style Maiden Braids - A Beautiful Mess - StumbleUpon Last month I did a makeover story with Kelsie and had many requests for a maiden braid tutorial. Yesterday she came in and we photographed these simple step by steps. Kelsie has extremely long and thick hair, but anyone with shoulder length or longer can do these braids (see my photo below for an example). Steps 1-2: Braid two strands on each side of a center part. Smart tips to make life easier Posted on February 24, 2012 in Humor If you’re new here, you may want to subscribe to our RSS feed or follow us on Facebook or Twitter . Thanks for visiting!

PLUS Model Magazine's Katya Zharkova cover highlights body image in the fashion industry By Tamara Abraham Updated: 12:08 GMT, 12 January 2012 A magazine dedicated to plus-size fashion and models has sparked controversy with a feature claiming that most runway models meet the Body Mass Index criteria for anorexia. Accompanied by a bold shoot that sees a nude plus-size model posing alongside a skinny 'straight-size' model, PLUS Model Magazine says it aims to encourage plus-size consumers to pressure retailers to better cater to them, and stop promoting a skinny ideal. Size 12 (U.S.) model Katya Zharkova, 28, stars in the shoot, which has a powerful statistic accompanying each image. DIY Fridge magnets and pushpins (Be sure to upload your photos from trying this project into the Brassy Apple Projects Flickr group!) I love taking fabric and using it on other fun crafting projects besides just sewing or what you would typically expect. I have several projects I have done over the last couple of months and thought I would share them with you! So if you - or your kids - are itching for a little DIY project, here's a great one for the whole family!

How To Style a Fishtail Braid We love the look of fishtail braids! This trend is incredibly easy to style, even on your own hair. Kinsey and I photographed the steps so you can try it out for yourself... Fun Friday - DIY Beach Hair - asuyeta [ah-soo-yeh-tah] clothes &accessories. handmade with love. - StumbleUpon I love the messy hair/bohemian look. I also love the beach. So, here is a DIY Sea Salt Beach Hair Spray that I can not live without anymore! The hair just looks so pretty, just like after a day at the beach.