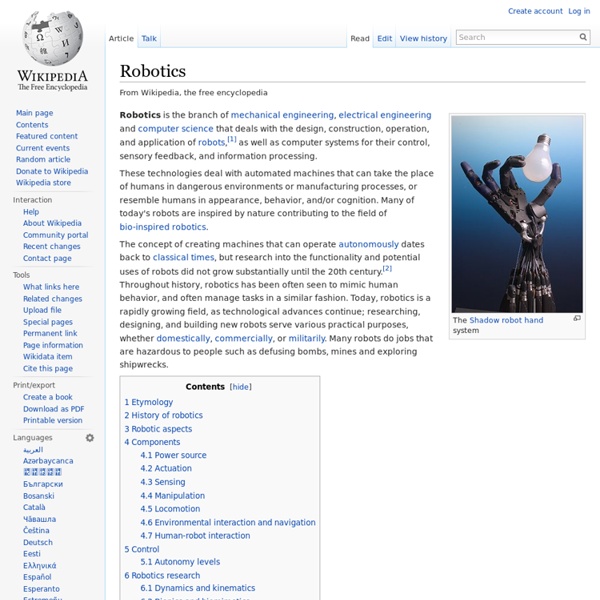 Robotics is the branch of mechanical engineering, electrical engineering and computer science that deals with the design, construction, operation, and application of robots,[1] as well as computer systems for their control, sensory feedback, and information processing. These technologies deal with automated machines that can take the place of humans in dangerous environments or manufacturing processes, or resemble humans in appearance, behavior, and/or cognition. Many of today's robots are inspired by nature contributing to the field of bio-inspired robotics. The concept of creating machines that can operate autonomously dates back to classical times, but research into the functionality and potential uses of robots did not grow substantially until the 20th century.[2] Throughout history, robotics has been often seen to mimic human behavior, and often manage tasks in a similar fashion. Etymology[edit] History of robotics[edit] Robotic aspects[edit] Components[edit] Power source[edit]

SPIDER CONCEPT These are a few example inputs and the resulting coupler curves as described by the relationships in the enable text of the Klann linkage. The inputs and resulting outputs are displayed in the tables next to each graph. The yellow curves trace out the path of each of the points through one complete revolution of the crank. The dimensions are unitless as the linkage is entirely mechanical and can be scaled up or down. Behavior Trees (Artificial Intelligence, Robotics and Control) This article is about Behavior Trees in AI, games, control systems and robotics. For Behavior Trees in requirements handling, see Behavior Trees. A Behavior Tree (BT) is a mathematical model of plan execution used in computer science, robotics and control systems. They describe switchings between a finite set of tasks in a modular fashion. Their strength comes from their ability to create very complex tasks composed of simple tasks, without worrying how the simple tasks are implemented.

Video: See how new wearable robot technology helps paralyzed patients walk ROCKFORD, MI -- An athlete who was paralyzed in an accident was able to walk again Monday morning during a demonstration of Ekso, a wearable exoskeleton robot, at DMC Rehabilitation Institute of Michigan's Center for Spinal Cord Injury Recovery. The Ekso technology, named for its exoskeleton-like properties, was developed by California-based Ekso Bionics and aims to help those with lower extremity paralysis or weakness to stand and walk. The wearable bionic robot technology is a battery-powered, bionic device and uses motors to help users walk, said Beverly Millson with Missing Sock Public Relations. The robotic suit weighs about 45 pounds and can be strapped on within three minutes. The patient does not bear the weight of the device as the load is transferred to the ground.

Building robots instead of sleeping Home Projects Shop Forums Download About JRO Other NEW version 1.1 of the hardware has been completed! Improvements in v1.1: Frame-rate is increased from 27 frames/sec to the full 30 frames/sec The OV6620 image sensor crystal now supplies the clock to the AVR mega8 Auto-baud of the user-interface serial port will be supported soon... Recognition of Finger Motions for Myoelectric Prosthetic Hand via Surface EMG 1. Introduction Recently, myoelectric prosthetic arms/hands, in which arm/hand gesture is distinguished by the identification of the surface electromyogram (SEMG) and the artificial arms/hands are controlled based on the result of the identification, have been studied (Weir, 2003). The SEMG has attracted an attention of researchers as an interface signal of an electric actuated arm for many years, and many of studies on the identification of the SEMG signal have been executed. Nowadays, it can be said that the SEMG is the most powerful source of control signal to develop the myoelectric prosthetic arms/hands. From the 1970s to the 1980s, elementary pattern recognition technique such as linear discriminant analysis, was used for the identification of the SEMG signals in (Graupe et al., 1978) and (Lee et al., 1984).

European Robotics Technology Platform June 2012 The 8th annual Invention and Entrepreneurship Award in Robotics and Automation (IERA) was presented to Gino De-Gol, Robocoaster Ltd. and Esben H. Østergaard, Universal Robots during the IERA Networking Dinner at the AUTOMATICA 2012 on 23 May, in Munich. It was hard to decide on the winner because the five finalists presented fantastic and outstanding projects”, said Shinsuke Sakakibara, IFR President and member of the Awards Committee.

Dream of making artificial body parts becoming a reality It sounds like a sci-fi movie – doctors growing body parts to cure our ills. But thanks to incredible breakthroughs, bionic repairs for humans are fast becoming a reality. Experts yesterday revealed they are perfecting “off the shelf” blood vessels, which could revolutionise treatment of heart attacks and strokes.

Project Lab Difficulty Level = 5 [What's this?] The Video Experimenter shield can give your Arduino the gift of sight. In the Video Frame Capture project, I showed how to capture images from a composite video source and display them on a TV. We can take this concept further by processing the contents of the captured image to implement object tracking and edge detection. The setup is the same as when capturing video frames: a video source like a camera is connected to the video input. The output select switch is set to “overlay”, and sync select jumper set to “video input”. South Korean Cheetaroid Wants to Join the Cat Robot Race Four-legged robots are multiplying in labs around the world, and a number of projects are drawing inspiration from one particular family of animals: big cats. This new breed includes Boston Dynamics's Cheetah, MIT's Cheetah Robot, Osaka University's Pneupard, and EPFL's CheetahCub. The latest specimen comes from South Korea and is called Cheetaroid. Now, you may be asking why we need quadruped robots and, in particular, cat-inspired ones. The creators of the Cheetaroid, a team from Sogang University's Robotic Systems Control Laboratory, led by Professor Kyoungchul Kong, are envisioning different applications.