Assemble a brain. It is a puzzlement: How do you assemble and wire an information processing device as complex as the mammalian brain? 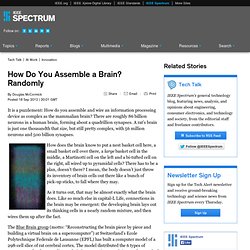 There are roughly 86 billion neurons in a human brain, forming about a quadrillion synapses. A rat’s brain is just one thousandth that size, but still pretty complex, with 56 million neurons and 500 billion synapses. Minded computer. Scientists believe they have found a way to read people's minds in what could be the first step towards helping brain-damaged patients who cannot speak. US researchers used a computer programme to decode brain activity and put it into words using a form of electronic telepathy. Experts described the breakthrough, unveiled in the journal Public Library of Science Biology, as "remarkable" and believe it could ultimately be possible to decipher people's thoughts. Researchers at the University of California in Berkeley used the programme to predict what spoken words volunteers had listened to by analysing their brain activity.

Previous research has shown imagined words activate similar brain areas as words that are said aloud, raising hopes they can also be uncovered by "reading" brain waves. Carreau de_peau. Touch sensitivity on gadgets and robots is nothing new. 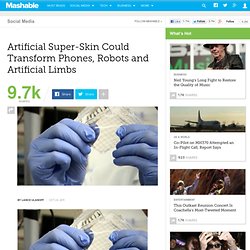 A few strategically placed sensors under a flexible, synthetic skin and you have pressure sensitivity. Sphère toucher. Science Published on June 20th, 2012 | by James Ayre With the right sensors, actuators and software, robots can now be given a tactile sense that imitates that of the sense of touch in humans. 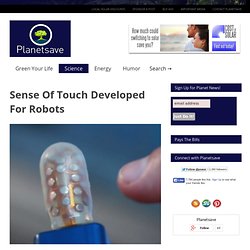 A specially designed robot is able to outperform humans in the identification of a wide range of materials based on their textures, according to new research from the University of Southern California’s Viterbi School of Engineering. Saisie sphère. Robotics is the branch of mechanical engineering, electrical engineering and computer science that deals with the design, construction, operation, and application of robots,[1] as well as computer systems for their control, sensory feedback, and information processing. 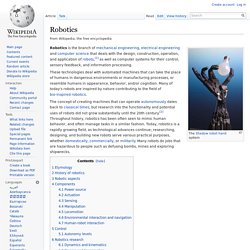 These technologies deal with automated machines that can take the place of humans in dangerous environments or manufacturing processes, or resemble humans in appearance, behavior, and/or cognition. Many of today's robots are inspired by nature contributing to the field of bio-inspired robotics. The concept of creating machines that can operate autonomously dates back to classical times, but research into the functionality and potential uses of robots did not grow substantially until the 20th century.[2] Throughout history, robotics has been often seen to mimic human behavior, and often manage tasks in a similar fashion.

Etymology[edit] History of robotics[edit] Robotic aspects[edit] Components[edit] Neurocell language. Imagine if we could under­stand the lan­guage two neu­rons use to com­mu­ni­cate. 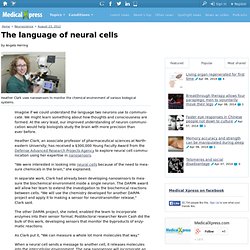 We might learn some­thing about how thoughts and con­scious­ness are formed. At the very least, our improved under­standing of neuron com­mu­ni­ca­tion would help biol­o­gists study the brain with more pre­ci­sion than ever before. Sized brain longevity. Hacked brain. By Peter V. 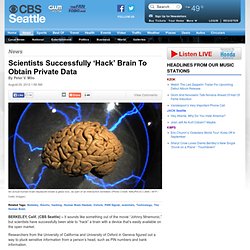 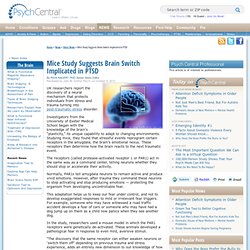 Grohol, Psy.D. on October 8, 2012 UK researchers report the discovery of a neural mechanism that protects individuals from stress and trauma turning into post-traumatic stress disorder. Investigators from the University of Exeter Medical School began with the knowledge of the brain’s “plasticity,” its unique capability to adapt to changing environments. Brain in world-2D. Brain work. Carreau social. Social brain. By Rick Nauert PhD Senior News Editor Reviewed by John M. 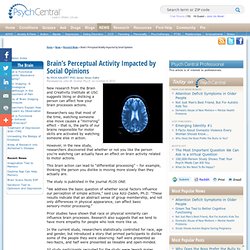 Grohol, Psy.D. on October 8, 2012 New research from the Brain and Creativity Institute at USC suggests liking or disliking a person can affect how your brain processes actions. Researchers say that most of the time, watching someone else move causes a “mirroring” effect – that is, the parts of our brains responsible for motor skills are activated by watching someone else in action. However, in the new study, researchers discovered that whether or not you like the person you’re watching can actually have an effect on brain activity related to motor actions. This brain action can lead to “differential processing” – for example, thinking the person you dislike is moving more slowly than they actually are. The study is published in the journal PLOS ONE.

“We address the basic question of whether social factors influence our perception of simple actions,” said Lisa Aziz-Zadeh, Ph.D. Source: USC Abstract of a blue brain photo by shutterstock. Gestion learning. After 24 hours of staring at their screens, the teams that participated in our Disrupt NY 2013 Hackathon have now finished their projects and are currently presenting them onstage. 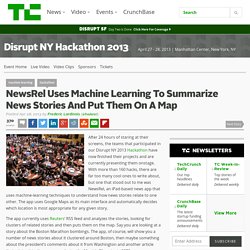 With more than 160 hacks, there are far too many cool ones to write about, but one that stood out to me was NewsRel, an iPad-based news app that uses machine-learning techniques to understand how news stories relate to one other. The app uses Google Maps as its main interface and automatically decides which location is most appropriate for any given story. The app currently uses Reuters‘ RSS feed and analyzes the stories, looking for clusters of related stories and then puts them on the map. Maths models. The folding of an Origami crane Origami (折り紙? 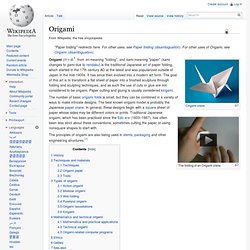 , from ori meaning "folding", and kami meaning "paper" (kami changes to gami due to rendaku) is the traditional Japanese art of paper folding, which started in the 17th century AD at the latest and was popularized outside of Japan in the mid-1900s. It has since then evolved into a modern art form. The goal of this art is to transform a flat sheet of paper into a finished sculpture through folding and sculpting techniques, and as such the use of cuts or glue are not considered to be origami.

Paper cutting and gluing is usually considered kirigami. The principles of origami are also being used in stents, packaging and other engineering structures.[1] History. Living neural. Electronic tattoos. We might one day be able to monitor our bodies' internal functions — and prevent things like epileptic seizures before they happen — using a flexible circuit attached to the surface of skin. The National Science Foundation announced Monday that researchers are working on a prototype tattoo-like device that can detect heart, muscle and brain activity.