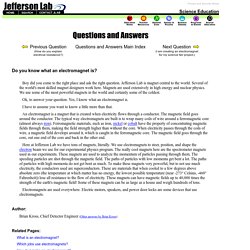 Boy did you come to the right place and ask the right question. Jefferson Lab is magnet central to the world. Applications of Electromagnetism in Technology and Life. Written by: sriram balu • edited by: Swagatam • updated: 12/1/2011 Electromagnetism has created a revolution not only in the field of engineering, but also in various other fields like medicine, space, construction etc. 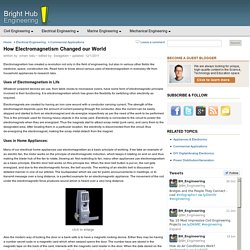 ­What do a wrecking yard, a rock concert and your front door have in common? 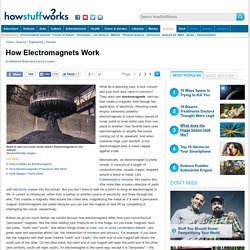 They each use electromagnets, devices that create a magnetic field through the application of electricity. Wrecking yards employ extremely powerful electromagnets to move heavy pieces of scrap metal or even entire cars from one place to another. Your favorite band uses electromagnets to amplify the sound coming out of its speakers. 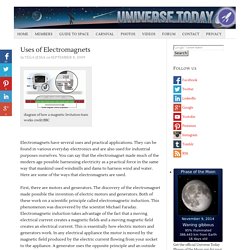 They can be found in various everyday electronics and are also used for industrial purposes ourselves. You can say that the electromagnet made much of the modern age possible harnessing electricity as a practical force in the same way that mankind used windmills and dams to harness wind and water. Here are some of the ways that electromagnets are used. First, there are motors and generators. Second, there are relays. Third, there are practical industrial uses. They are also used in transportation. There several other uses for electromagnets from security systems, to switches, and even propulsion systems for spacecraft. If you enjoyed this article there are several others on Universe Today that you will enjoy. Types of Forces. Types of Friction. Friction: Definition and Types - Video & Lesson Transcript. What is Friction? 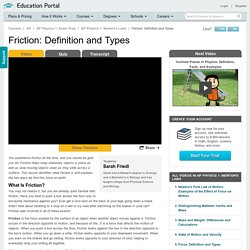 You may not realize it, but you are already quite familiar with friction. Have you tried to push a box across the floor only to encounter resistance against you? Ever get a nice burn on the back of your legs going down a metal slide? How about skidding to a stop on a wet or icy road after slamming on the brakes in your car? Friction was involved in all of these events! Friction is the force exerted by the surface of an object when another object moves against it. When two objects rub together, it sets off attractive forces between the molecules of the objects, causing friction. 4 Types of Friction. Gravity Facts. How does gravity work? Every time you jump, you experience gravity. 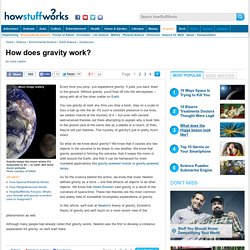 It pulls you back down to the ground. Without gravity, you'd float off into the atmosphere -- along with all of the other matter on Earth. You see gravity at work any time you drop a book, step on a scale or toss a ball up into the air. It's such a constant presence in our lives, we seldom marvel at the mystery of it -- but even with several well-received theories out there attempting to explain why a book falls to the ground (and at the same rate as a pebble or a couch, at that), they're still just theories.

The mystery of gravity's pull is pretty much intact. So what do we know about gravity? As for the science behind the action, we know that Isaac Newton defined gravity as a force -- one that attracts all objects to all other objects. Interesting Gravity Facts - Acceleration, G-Force, Mass, Formula, Law, Orbit. Gravity. By Mark Hughes You are shrinking right now. 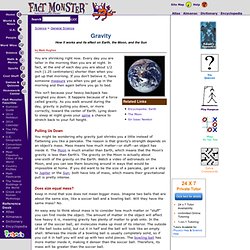 Every day you are taller in the morning than you are at night. In fact, at the end of each day you are about 1/2 inch (1.25 centimeters) shorter than when you got up that morning. If you don't believe it, have someone measure you when you get up in the morning and then again before you go to bed. This isn't because your heavy backpack has weighed you down. Pulling Us Down.

Mechanics: Physics NCEA LEVEL 2. Mechanics (Physics) Mechanics, science concerned with the motion of bodies under the action of forces, including the special case in which a body remains at rest. 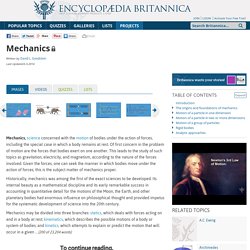 Of first concern in the problem of motion are the forces that bodies exert on one another. This leads to the study of such topics as gravitation, electricity, and magnetism, according to the nature of the forces involved. Given the forces, one can seek the manner in which bodies move under the action of forces; this is the subject matter of mechanics proper. Historically, mechanics was among the first of the exact sciences to be developed.