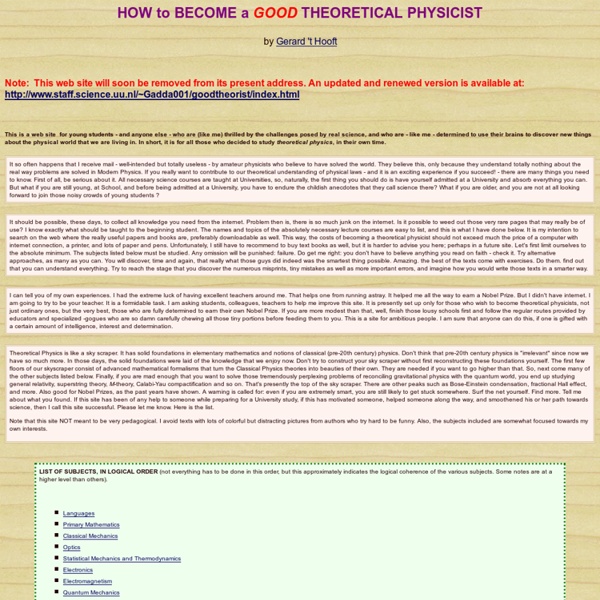 by Gerard 't Hooft Note: This web site will soon be removed from its present address. An updated and renewed version is available at: This is a web site for young students - and anyone else - who are (like me) thrilled by the challenges posed by real science, and who are - like me - determined to use their brains to discover new things about the physical world that we are living in. It so often happens that I receive mail - well-intended but totally useless - by amateur physicists who believe to have solved the world. It should be possible, these days, to collect all knowledge you need from the internet. I can tell you of my own experiences. Theoretical Physics is like a sky scraper. Note that this site NOT meant to be very pedagogical. Languages:English is a prerequisite. French, German, Spanish and Italian may be useful too, but they are not at all necessary. Return to List Now, first things first : Algebraic equations.

Physics of Collective Consciousness by Attila Grandpierre Attila Grandpierre, Ph.D. Konkoly Observatory of the Hungarian Academy of Sciences H-1525 Budapest P. O. Box 67., Hungary February 6, 1996 From: ABSTRACT: It is pointed out that the organisation of an organism necessarily involves fields which are the only means to make an approximately simultaneous tuning of the different subsystems of the organism-as-a-whole. 1. It is generally accepted that consciousness evolved parallel to the biological and social complexity of the living systems. 2. It is widely believed, that the way evolution manifest is from parts to the whole, from the inorganic matter through the unicellular organism towards the multicellular ones until the appearance of consciousness. This chain of thought places collective phenomena into the centre of evolution and the generation of consciousness. 3. Experiments show that collective biological fields may dominate the individual field (Popp, 1994). 4.

Stephen Hawking on time travel, M-theory, and extra terrestrial life Stephen Hawking is near-universally recognized as a brilliant scientist, and one small facet of his complex genius is the rockstar ability to democratize scientific knowledge. It's becoming increasingly important as purveyors of pop culture continue to eschew acknowledgment and respect for the most basic scientific principles. Hollywood in particular has continued its marginalization of scientific knowledge with blatant disregard in recent films. But Hawking acts like a great counter force against anti-intellectual movements. So I (and everyone around me) felt a consummate air of curiosity in the Paramount Theater lobby on June 16, as Dr. The following are the press questions from Seattle-area colleagues that I read to Dr. What would it take to make time travel a reality, and how would that affect the present reality? We are all travelling forward in time anyway. How would you describe your quality of life?

www.math.rutgers.edu/~lenci/jokes/chicken WHY DID THE CHICKEN CROSS THE ROAD? Plato: For the greater good. Karl Marx: It was a historical inevitability. Gravity's Engines: Amazon.co.uk: Caleb Scharf As mainstream science books go, this was a breezy and insightful read. There were some memorable passages with some great descriptions. Among them, the black holes' bubbles as the universe's most powerful subwoofer, the dissection of Einstein's field equation, and the growing kinetic energy of flower pot fall down from various heights to different object surfaces. If a writer can guide my dull old mind through Einstein's field equation without losing me, that writer is doing something right! This book does not have the ambitious scope of other science books about astrophysics, and almost felt light because of that, but you have to keep some perspective: many of the other popular astrophysics books are inordinately ambitious with respect to other types of mainstream science publishing. Scharf's main points of interest seem to be the physics AROUND black holes and their role in shaping the universe as we see it today.

SUPERSTRINGS! M-Theory M-theory is described at low energies by an effective theory called 11-dimensional supergravity. This theory has a membrane and 5-branes as solitons, but no strings. How can we get the strings that we've come to know and love from this theory? We can compactify the 11-dimensional M-theory on a small circle to get a 10-dimensional theory. How do we know that M-theory on a circle gives the IIA superstring, and not the IIB or Heterotic superstrings? The two that have been left out are the D6 and D8-branes. We can also get a consistent 10-dimensional theory if we compactify M-theory on a small line segment. So given this new phase 11-dimensional phase of string theory, and the various dualities between string theories, we're led to the very exciting prospect that there is only a single fundamental underlying theory -- M-theory. << Back | Home | Contents | Next >>

Physics engines for dummies Hello and welcome back to my blog! This time i’m going to talk about the basic components that make up a physics engine and how to put them together; this tutorial is aimed at programmers who have a basic grasp of maths and geometry but would like to step into the world of simulation. It is my hope that if, at the beginning of this article, you are able to code the physics behind the 1972 game Pong, by the end of the article you will be equally happy writing your own constraints to use in your own physics solver! Can you code this? I’ve always found the title of those books of from the ‘…for dummies’ series reassuring; after all, if a dummy can learn this stuff you should stand a good chance, right? ...for dummies? Hence the title of this article. Plan of action Ok, so i’m going to cover a few of the things you might want in a physics engine: Rigid bodiesCollisionsResting contactConstraints (Joints) Simulation Starting out with particles, which we assume will have a position P and a velocity V.

8 shocking things we learned from Stephen Hawking's book From the idea that our universe is one among many, to the revelation that mathematician Pythagoras didn't actually invent the Pythagorean theorem, here are eight shocking things we learned from reading physicist Stephen Hawking's new book, "The Grand Design," written with fellow physicist Leonard Mlodinow of Caltech. The book, covering major questions about the nature and origin of the universe, was released Sept. 7 by its publisher, Bantam. 1. The past is possibility According to Hawking and Mlodinow, one consequence of the theory of quantum mechanics is that events in the past that were not directly observed did not happen in a definite way. Instead they happened in all possible ways. This is related to the probabilistic nature of matter and energy revealed by quantum mechanics: Unless forced to choose a particular state by direct interference from an outside observation, things will hover in a state of uncertainty. Yeah, we're still trying to wrap our brains around this. 2. 3. 4. 5. 6.

News - Magnetic bacteria may help build future bio-computers 7 May 2012Last updated at 09:40 GMT Tiny magnets form inside magnetic bacteria Magnet-making bacteria may be building biological computers of the future, researchers have said. A team from the UK's University of Leeds and Japan's Tokyo University of Agriculture and Technology have used microbes that eat iron. As they ingest the iron, the microbes create tiny magnets inside themselves, similar to those in PC hard drives. The research may lead to the creation of much faster hard drives, the team of scientists say. The study appears in the journal Small. As technology progresses and computer components get smaller and smaller, it becomes harder to produce electronics on a nano-scale. So researchers are now turning to nature - and getting microbes involved. Magnetic bacteria In the current study, the scientists used the bacterium Magnetospirilllum magneticum. These naturally magnetic microorganisms usually live in aquatic environments such as ponds and lakes, below the surface where oxygen is scarce.

multiverse A multiverse (or meta-universe) is the hypothetical set of multiple possible universes (including our universe) that together comprise all of physical reality. The different universes within a multiverse are called parallel universes. The structure of the multiverse, the nature of each universe within it and the relationship between the various constituent universes, depend on the specific multiverse hypothesis considered. Multiverses have been hypothesized in cosmology, physics, philosophy, theology, and fiction, particularly in science fiction and fantasy. The possibility of many universes raises various scientific, philosophical, and theological questions. Multiverse hypotheses in physics Classification According to Max Tegmark,1 the existence of other universes is a direct implication of cosmological observations. The levels according to Tegmark's classification and using Ellis, Koechner and Stoeger's terminology are briefly described below. Level I: (Open multiverse). Open multiverse

TLP Library Ferromagnetic Materials Click here for actual (non-printable) TLP pages Note: DoITPoMS Teaching and Learning Packages are intended to be used interactively at a computer! This print-friendly version of the TLP is provided for convenience, but does not display all the content of the TLP. For example, any video clips and answers to questions are missing. The formatting (page breaks, etc) of the printed version is unpredictable and highly dependent on your browser. Contents Aims On completion of this tutorial you should: Understand ferromagnetism as a type of magnetism and some of the reasons an element is ferromagnetic Be aware that magnetism is affected by temperature Understand the factors contributing to the formation of magnetic domains Know why hysteresis occurs, and the factors which affect it Before you start Most of this package does not assume any previous understanding of ferromagnetism. Introduction Types of magnetism Figure A. Figure B. Figure C. Figure D. Figure E. Why are some materials magnetic? Domains