Website 1: The Victorianist: Matchgirls Strike. With London travellers today being dogged by the 24hr tube strike, I thought we would look at a strike that occurred 122 years ago in London, namely, the matchgirls strike of 1888. 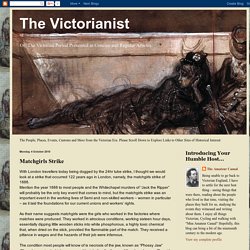 Mention the year 1888 to most people and the Whitechapel murders of “Jack the Ripper” will probably be the only key event that comes to mind, but the matchgirls strike was an important event in the working lives of Semi and non-skilled workers – women in particular – as it laid the foundations for our current unions and workers’ rights.As their name suggests matchgirls were the girls who worked in the factories where matches were produced. They worked in atrocious conditions, working sixteen hour days, essentially dipping little wooden sticks into white phosphorous, a highly toxic chemical that, when dried on the stick, provided the flammable part of the match. They received a pittance in wages and the hazards of their job were infamous. Website 2: London matchgirls strike of 1888.

The London matchgirls’ strike of 1888 was a strike of the women and teenage girls working at the Bryant and May Factory in Bow, London. 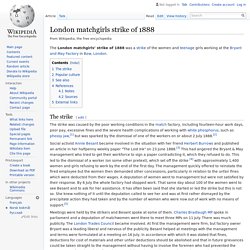 The strike[edit] The strike was caused by the poor working conditions in the match factory, including fourteen-hour work days, poor pay, excessive fines and the severe health complications of working with white phosphorus, such as phossy jaw,[1] but was sparked by the dismissal of one of the workers on or about 2 July 1888.[2] Social activist Annie Besant became involved in the situation with her friend Herbert Burrows and published an article in her halfpenny weekly paper "The Lost Ink" on 23 June 1888.[3] This had angered the Bryant & May management who tried to get their workforce to sign a paper contradicting it, which they refused to do.

This led to the dismissal of a worker (on some other pretext), which set off the strike [4] with approximately 1,400 women and girls refusing to work by the end of the first day. Popular culture[edit] See also[edit] Website 3: Museum of London - The match workers of Bow. In 1888 the Bryant and May match factory in Bow, was the site of a remarkable story of struggle, strife and success, when the women who worked at the factory went on strike. 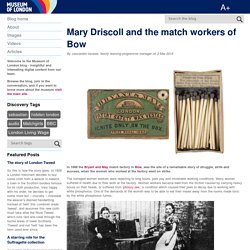 The outraged women workers were objecting to long hours, poor pay and intolerable working conditions. Many women suffered ill health due to their work at the factory. Women workers became bald from the friction caused by carrying heavy boxes on their heads, or suffered from ‘phossy jaw,’ a condition which caused their jaws to decay due to working with white phosphorus. Website 4: The Match girls’ strike; how Bryant & May workers changed the world. THE London match girls’ strike continues to echo out of the pages of history to inspire workers around the world. 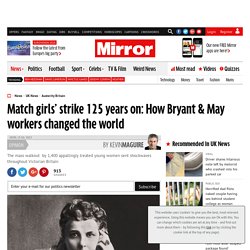 The mass walkout exactly 125 years ago by 1,400 appallingly treated young women sent shockwaves throughout Victorian Britain. Women in 1888 did not have the vote and employment rights were non-existent in the industrial hell that was the Bryant & May factory in Bow, East London. Today in Britain, working under 13 is outlawed except in telly, theatre or modelling when a performance licence is required. Official estimates have more than 30,000 13-to-16-year-olds in England and Wales with part-time jobs while at school, such as paper rounds. But the true number of kids in paid employment is widely thought to be much higher – as the children of Austerity Britain try to earn cash their families cannot provide. Back in 1888, merciless bosses ruled the Bryant & May factory with a rod of iron – sick women were chucked away like spent matches.

Internet. Website 5: The matchgirls of 1888. With rapid industrialisation taking place in the 19th century, the population in cities increased massively as people moved from the countryside to find work. 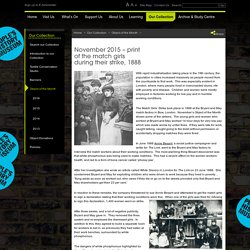 This was especially evident in London, where many people lived in overcrowded slums, rife with poverty and disease. Children and women were mostly employed in factories working for low pay and in horrible working conditions. Bonus website: The Matchgirls Strike. In June 1888, Clementina Black gave a speech on Female Labour at a Fabian Society meeting in London. 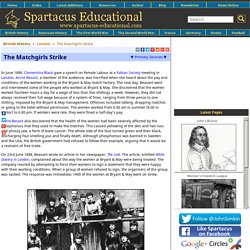 Annie Besant, a member of the audience, was horrified when she heard about the pay and conditions of the women working at the Bryant & May match factory. The next day, Beasant went and interviewed some of the people who worked at Bryant & May. She discovered that the women worked fourteen hours a day for a wage of less than five shillings a week. However, they did not always received their full wage because of a system of fines, ranging from three pence to one shilling, imposed by the Bryant & May management. Offences included talking, dropping matches or going to the toilet without permission. Matchstick Girls Exit ticket.