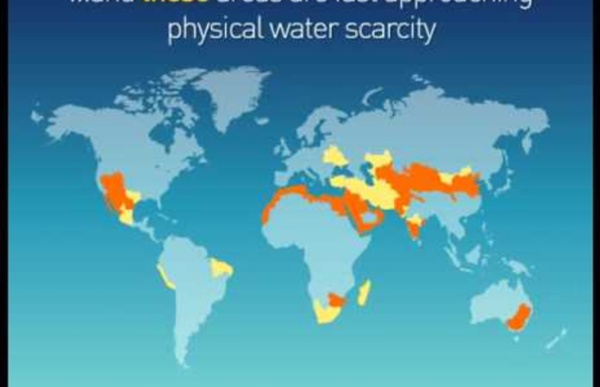 Water and Conflict in Asia? Water security is emerging as an increasingly important and vital issue for the Asia-Pacific region. Perhaps no other resource—other than oxygen—is so intricately linked to human health and survival. However, as the region’s population growth continues to surge, the demand for water is increasing substantially, without a concomitant increase in water resources. Many Asian countries are beginning to experience moderate to severe water shortages, brought on by the simultaneous effects of agricultural growth, industrialization, and urbanization. In recent years, moreover, evidence indicates that water security is becoming increasingly affected by erratic weather patterns, most notably the El Nino and La Nina weather phenomena. Several countries in the region, including Indonesia and Papua New Guinea, have experienced droughts of such severity that they have caused food shortages and have threatened the long-term food supply. The world’s freshwater supply is finite. Agriculture

Engineers develop revolutionary nanotech water desalination membrane Researchers at the UCLA Henry Samueli School of Engineering and Applied Science today announced they have developed a new reverse osmosis (RO) membrane that promises to reduce the cost of seawater desalination and wastewater reclamation. Reverse osmosis desalination uses extremely high pressure to force saline or polluted waters through the pores of a semi-permeable membrane. Water molecules under pressure pass through these pores, but salt ions and other impurities cannot, resulting in highly purified water. The new membrane, developed by civil and environmental engineering assistant professor Eric Hoek and his research team, uses a uniquely cross-linked matrix of polymers and engineered nanoparticles designed to draw in water ions but repel nearly all contaminants. "The nanoparticles are designed to attract water and are highly porous, soaking up water like a sponge, while repelling dissolved salts and other impurities," Hoek said. Source: University of California - Los Angeles

Southern African leaders fail to prioritise water and sanitation | Global development The majority of southern Africans are living in an "unrelenting struggle against sanitation and water poverty," according to a new report that accuses governments in the region of failing to prioritise their plight. In From promise to reality, the international NGO WaterAid says southern African leaders have fallen behind on their promises to boost public spending on basic services, with the poorest and most vulnerable people hardest hit. "There is a lot of economic growth in the region... but this is bypassing much of the population," said John Garrett, senior policy analyst at WaterAid, contrasting the optimism over southern Africa's economic prospects with the region's lagging progress on clean water and sanitation targets. An estimated 174 million people in southern Africa - almost two thirds of the total population - lack access to basic latrines, while more than 100 million go without clean drinking water. WaterAid says no government in southern Africa has met the spending target.

Water wars: a new reality for business and governments | Guardian Sustainable Business | The Guardian During his reign from 2,450-2,400BC, King of Lagash set about building boundary canals around his territory. The result was a gradual reduction in the water flowing to nearby Umma (modern-day Iraq). Fisticuffs followed. Violent tensions over water are certainly nothing new, but they are on the rise. “We see thousands of years of examples where water has been a source of tension in one form or another … but violence related to water is growing, not shrinking”, says Peter Gleick, president of the Pacific Institute, an independent US research centre that publishes a chronology of water-related conflicts. Clash of interests Basic demand-supply rules go a long way to explaining the reasons behind this growing friction. The result is a predictable clash of interests, states Paul Reig, a water expert at the World Resources Institute, a US conservation organisation. Water can act as a secondary cause of conflict as well. Even more likely is an escalation in sub-national conflicts, says Gleick.

Multiple-effect distillation Multiple-effect distillation (MED) is a distillation process often used for sea water desalination. It consists of multiple stages or "effects". In each stage the feed water is heated by steam in tubes. Some of the water evaporates, and this steam flows into the tubes of the next stage, heating and evaporating more water. Each stage essentially reuses the energy from the previous stage. The tubes can be submerged in the feed water, but more typically the feed water is sprayed on the top of a bank of horizontal tubes, and then drips from tube to tube until it is collected at the bottom of the stage. Operating principles[edit] Schematic of a multiple effect desalination plant. The plant can be seen as a sequence of closed spaces separated by tube walls, with a heat source in one end and a heat sink in the other end. Trade-offs[edit] The first and last stages need external heating and cooling respectively. External feed water must be supplied to the first stage. Advantages[edit] See also[edit]

Desalination Desalination, desalinization, and desalinisation refer to any of several processes that remove some amount of salt and other minerals from saline water. More generally, desalination may also refer to the removal of salts and minerals,[1] as in soil desalination, which also happens to be a major issue for agricultural production.[2] Salt water is desalinated to produce fresh water suitable for human consumption or irrigation. One potential byproduct of desalination is salt. Due to relatively high energy consumption, the costs of desalinating sea water are generally higher than the alternatives (fresh water from rivers or groundwater, water recycling and water conservation), but alternatives are not always available and rapid overdraw and depletion of reserves is a critical problem worldwide. Desalination is particularly relevant to dry countries such as Australia, which traditionally have relied on collecting rainfall behind dams to provide their drinking water supplies. Methods[edit]

Fresh Water Scarcity And Cost-Effective Desalination By Greg Borzo The scarcity of fresh water is an increasingly serious problem around the world due to growing populations and diminishing supplies of fresh water. Desalination could help alleviate these shortages, but it has traditionally been an extremely expensive process. The demand for water is so great that the worldwide desalination market is expected to reach an astonishing $87.8 billion by 2016, even though only about 1 percent of the world’s drinking water is produced by desalination. There is a huge need for technologies that could reduce this cost. To help meet this need, the Innovation Fund, the University of Chicago’s venture philanthropic proof-of-concept fund, awarded Heinrich Jaeger, the William J. “In order for desalination to become a real solution to the growing water scarcity problem, new technologies will be required to reduce the major cost components of the process,” says Sean Sheridan, an assistant director at UChicagoTech, which administers the Innovation Fund.

Toxic shock: California allows up to one thousand times more glyphosate in drinking water than needed to cause breast cancer in women (NaturalNews) Late last week, a story broke that revealed glyphosate -- the chemical name of Roundup herbicide -- multiplies the proliferation of breast cancer cells by 500% to 1300%... even at exposures of just a few parts per trillion (ppt). The study, published in Food and Chemical Toxicology, is entitled, "Glyphosate induces human breast cancer cells growth via estrogen receptors." You can read the abstract here. There's a whole lot more to this story, however, but to follow it, you need to understand these terms: ppm = parts per million = 10 (-6) = number of parts out of a million ppb = parts per billion = 10 (-9), which is 1,000 times smaller than ppm ppt = parts per trillion = 10 (-12), which is 1,000 times smaller than ppb and 1,000,000 times smaller than ppm The study found that breast cancer cell proliferation is accelerated by glyphosate in extremely low concentrations: ppt to ppb. This news, all by itself, sent shockwaves across the 'net all weekend. The document openly admits: