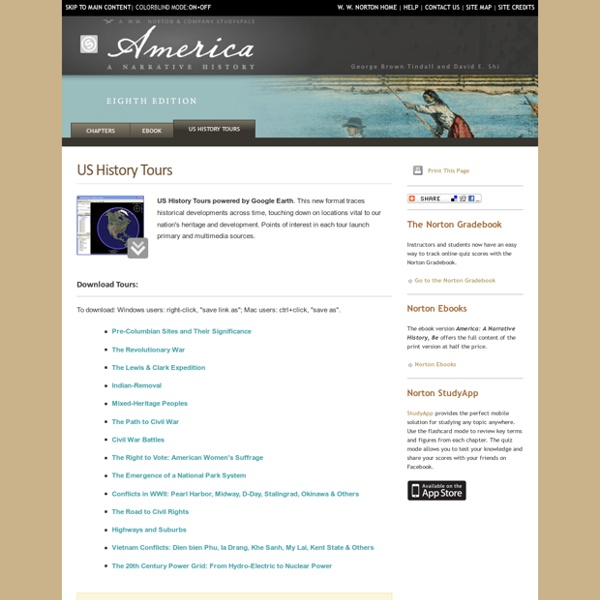 US History Tours powered by Google Earth. This new format traces historical developments across time, touching down on locations vital to our nation's heritage and development. Points of interest in each tour launch primary and multimedia sources. Download Tours: To download: Windows users: right-click, "save link as"; Mac users: ctrl+click, "save as". If you haven’t done it already, download Google Earth™ and install it on your computer. Related:  TAIS Social Studies

Five Ways to Visually Explore Wikipedia Wikipedia is one of the first places that students often go to get some background information on a topic they're researching. Besides just going to Wikipedia.org and entering a search, there are some other ways to explore the content of Wikipedia. Here are five ways that students can visually explore Wikipedia's content. Wiki Mind Map is a resource for visually exploring Wikipedia. Wiki Mind Map is essentially a search engine for Wikipedia articles that uses the Google Wonder Wheel concept. Wikihood is a neat way to explore the world in your web browser. Wiki Field Trip is a neat website for exploring Wikipedia entries about places around the world. The Full Wiki offers an interesting mash-up of Google Maps and Wikipedia entries. One of the standard layers in Google Earth is the Wikipedia layer.

Trading Around the World International trade touches us all. We drink soda from cans made of aluminum mined in Australia, wear shoes made in Europe, eat fruit from South America, build machinery from steel milled in Asia, wear clothes made from African cotton, and live in homes built from North American wood. We take it for granted, yet before we can enjoy these products and materials, traders must negotiate prices and deliver the goods through a network of relationships that literally spans the globe. Play this game to experience the challenges and excitement of international trade. Before you start, think about what you want to accomplish as a trader: Do you want to build up as much wealth as you can by selling as much of your commodities as you can? The only limit is your imagination, your negotiating skills, and your bank account!

Stats about all US cities - real estate, relocation info, house prices, home value estimator, recent sales, cost of living, crime, race, income, photos, education, maps, weather, houses, schools, neighborhoods, and more 7 Resources for Teaching and Learning About Mount Everest This is one of those posts that I write every year just because this is one of my "pet topics." Visiting the Himalayas is on my life list so I like to write about Mount Everest when I get a chance. This year's spring climbing season on Mount Everest is underway so I thought I would review some resources for teaching and learning about Mount Everest. National Geographic Expeditions has a lesson plan for middle school students about the history and development of climbing Mount Everest. The Rest of Everest video podcast provides more than 100 hours of video and commentary from two expeditions to the Himalayas. Panoramas.dk, hosts dozens of other interactive panoramas from around the world. Everest: Beyond the Limit was a Discovery series that chronicled the efforts of amateur mountain climbers attempting to climb Mount Everest. This Google Earth tour of Mount Everest's South Col route offers good views of the steps and camps along the way to the summit of Mount Everest.

IWitness | IWitness - Education through Genocide Testimony Liberation Heroes: The Last Eyewitnesses Explore classroom-ready resources in support of USC Shoah Foundation's new documentary, Liberation Heroes: The Last Eyewitnesses, which premiered on the Discovery Channel in honor of Holocaust Remembrance Day. Explore » Stronger Than Hate Stronger Than Hate empowers students with the knowledge, skills and dispositions they need to counter hatred and indifference in their daily lives. By engaging with the stories of survivors and witnesses of genocide, students confront the difficult reality of hate, and explore how they can respond to hate through action. Learn More » Schindler's List ~ 25th Anniversary One person can make a difference and that person is you! Discover flexible teaching tools from Schindler’s List education partners designed to accompany student screenings of the film later this fall. Learn More » What is IWitness? Over 1,500 video testimonies, multimedia activities, digital resources – the place to participate actively in learning. Connects

Manifest Destiny - The Story of The US Told In 141 Maps The United States Constitution came into effect, forming the new nation. Note that the states ratified at different times, but to simplify the map, the final result is shown here. The United States achieved independence from the Kingdom of Great Britain with the Treaty of Paris on September 3, 1783, which established that the thirteen colonies were sovereign and independent states. The borders were established by Article 2 of the treaty, but with a couple of issues. Some peculiarities to point out to those familiar only with the current borders: Many states had sea-to-sea grants from the British crown that they would not give up easily, so prior to this date, they ceded this land to the federal government in exchange for their Revolutionary War debts. West Florida claimed a border further north than what the United States said it had. The Wedge, disputed since the 17th century, remained a point of contention between Delaware and Pennsylvania.