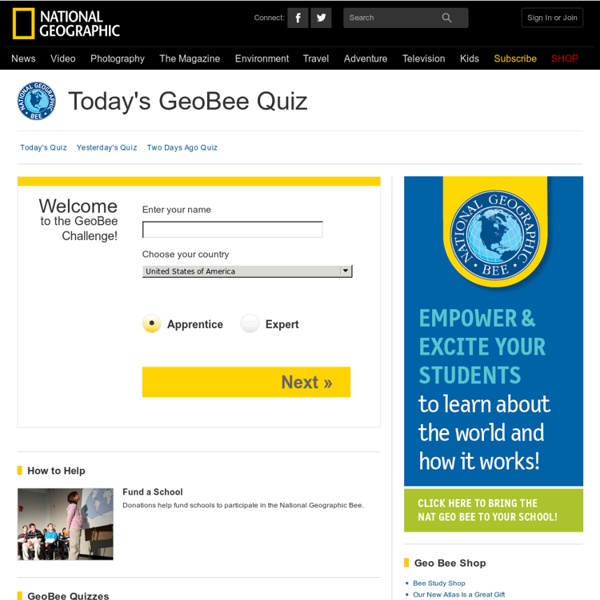 Welcome to the GeoBee Challenge! You have ten questions to answer in as short a time as possible. The quicker you give the correct answer, the more GeoPoints you earn. In Apprentice mode, you have two chances to choose the correct answer. In Expert mode, you have only one chance. Once you've completed the GeoBee Challenge, see if your score was high enough to make it onto our Top 10 leaderboard. Ready to Play? Well done, {{name}}! Come back everyday for ten new questions—and another chance to conquer the GeoBee challenge.

MapFab is a Fabulous Map Creation Tool MapFab is an excellent free map creation tool built on top of Google Maps. MapFab offers a few advantages over Google Maps, but the most notable advantage is that you do not have to create an account in order to create your custom maps. To start creating custom maps on MapFab just head to the site and enter your starting location. Then select from the menu of custom placemarks and enter a description. There is a variety of font colors to choose from when you label your placemarks. That same variety of text colors can be applied to your map title too. Cambridge University Quiz Society Questions of the Week The QuizSoc mailing list formerly held a quiz of the week in its newsletter. This is the archive of those questions. George Formby The last Questions of the Week were on the life and works of George Formby. Congratulations to Fayyaz Muddassir Mubeen and Lee Zhao who both knew that

Quiz for Test Lovers If You Like Puzzles, Try Some of Ours . . . Many Mensans love to tackle mental puzzles like the ones below. Some you may find easy, others you may not. If you can solve them, you might be one of the five million Americans eligible for Mensa. Two World War II reference apps for the iPad Review When I was about 10 years old, I decided it was time to graduate from the Scholastic Reader-approved books of my youth to what I determined was meatier, more adult fare. I checked out a book from the library about World War II—it may well have been one of those Time-Life overviews of the war that doubtlessly make serious historians cringe. But for a 10-year-old it was just the sort of stuff to spark an interest in history that continues to this day. The 10-year-olds of 2012 have more sophisticated tools at their disposal in the form of Apple’s iPad.

This Day in History — History.com — What Happened Today in History On this day in 1947, Jackie Robinson, age 28, becomes the first African-American player in Major League Baseball when he steps onto Ebbets Field in Brooklyn to compete for the Brooklyn Dodgers. Robinson broke the color barrier in a sport that had been segregated for more than 50 years. Exactly 50 years later, on April 15, 1997, Robinson's groundbreaking career was honored and his uniform number, 42, was retired from Major League Baseball by Commissioner Bud Selig in a ceremony attended by over 50,000 fans at New York City's Shea Stadium. Robinson's was the first-ever number retired by all teams in the league. Jack Roosevelt Robinson was born January 31, 1919, in Cairo, Georgia, to a family of sharecroppers.

Lesson Plans - Xpeditions @ nationalgeographic.com Xpeditions is now archived in National Geographic Education's new website—natgeoed.org If you liked Xpeditions, you'll love the new media-rich natgeoed.org. Explore the new site now for activities, maps, interactives, videos, homework help, and more! ANNIVERSARY QUIZ This is the fourth among the series of quizzes we have planned as part of the celebration of 5 years of the Quizzards_2k4 yahoo group.This is a quiz based on Hindu Mythology This edition had 10 people attempting the quiz. 1. Only one of the five Pandavas had the courage to suggest to Yudishtra that Lord Krishna should be the first person to be honored before the Rajasuya Yagna could be performed. Who?

Museum Box Homepage Free Homeschooling Unit Studies Online: Unit Topics Starting with A Unit Studies Using Weaver The Weaver uses the Bible as the spring-board for history, science, creative writing and many other projects. As we began to systematically work through the Bible I realized that my goal was being accomplished. My children were exposed to the profound truths of the Bible and loving it. Our Bible times do not focus on facts but on the application of the Word. Career Bullseye posters | Department of Education Career Development Career Bullseye posters For: