MISH MASH ~ these need to be filed proprly too

These 30 Hacks Have Been Helping For 135 Years. You may think life hacks are a 21st-century thing, but a company named Gallaher's Cigarettes was creating these helpful tricks way back in the 1880s. 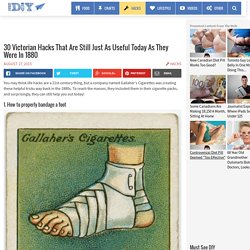 To reach the masses, they included them in their cigarette packs, and surprisingly, they can still help you out today! 1. How to properly bandage a foot "Rest injured foot on operator's knee on a clean towel. Commence bandaging in manner shown by the lower diagram, the bandage being bound over and round the back of the foot in a spiral fashion, and eventually affixed by a safety pin, just beneath the ankle as shown in the upper illustration. " 2. "A pair of loose shoes can be made to fit comfortably by fixing (with seccotine) a piece of velvet or velveteen inside the heel as shown in the picture. 3.

Behind the Lens: Kindra Nikole Creates Gorgeous Dreamlike WorldsOnemorepost. Photography is all about reaching deep down into the soul and taking that emotion and capturing it on film. 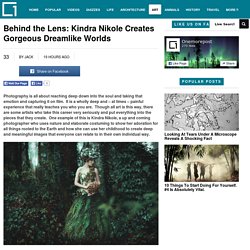 It is a wholly deep and – at times – painful experience that really teaches you who you are. Though all art is this way, there are some artists who take this career very seriously and put everything into the pieces that they create. One example of this is Kindra Nikole, a up and coming photographer who uses nature and elaborate costuming to show her adoration for all things rooted to the Earth and how she can use her childhood to create deep and meaningful images that everyone can relate to in their own individual way.

She states that her desire to start this journey with her camera started when she got back into photography. Working in a darkroom always was something that Nikole enjoyed, it was methodical and organized, all things that she found great joy and peace in. Life on Earth sur Twitter : "Colour Chart, by Tree... Life on Earth sur Twitter : "Breathtaking Wire Sculptures Capture the Fluidity of the Human Body. 271 Years Before Pantone, an Artist Mixed and Described Every Color Imaginable in an 800-Page BookOnemorepost. You might think that a book about watercolours would be quite simple in its design-and if you think that, you must never of heard of the book Traité des couleurs servant à la peinture à l’eau, which was written in sixteen ninety-two. 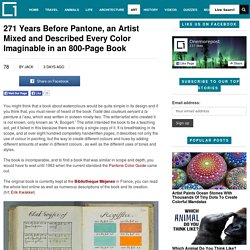 The writer/artist who created it is not known, only known as “A. Boogert.” The artist intended the book to be a teaching aid, yet it failed in this because there was only a single copy of it. It is breathtaking in its scope, and at over eight hundred completely handwritten pages, it describes not only the use of colour in painting, but the way to create different colours and hues by adding different amounts of water in different colours , as well as the different uses of tones and styles. The book is incomparable, and to find a book that was similar in scope and depth, you would have to wait until 1963 when the current standard-the Pantone Color Guide-came out.

20 Magical Cinemagraphs That Will Leave You EntrancedOnemorepost. Twitter. Earth - Beautiful X-ray images of animals. Arie van ’t Riet has a unique view of life on earth. 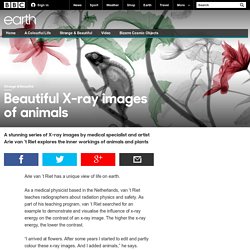 As a medical physicist based in the Netherlands, van ’t Riet teaches radiographers about radiation physics and safety. As part of his teaching program, van ’t Riet searched for an example to demonstrate and visualise the influence of x-ray energy on the contrast of an x-ray image. The higher the x-ray energy, the lower the contrast. “I arrived at flowers. After some years I started to edit and partly colour these x-ray images. Van ’t Riet now produces a series of x-ray artworks demonstrating the inner beauty of life. Each image is produced at his home, where he has an x-ray machine under licence. His work has now given him a new perspective on nature.

“The x-rays demonstrate the complexity and the inner refinement of natural objects. On the other hand, the x-ray images also demonstrate the similarities between life forms, he says. “See the trachea in the python and the lizard, it is the same construction as mine. This 11 Year Old Boy Creates The Most Awesome And Detailed Drawings You Have Ever SeenOnemorepost. This boy has an amazing talent. 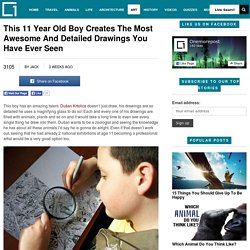 Dušan Krtolica doesn’t just draw, his drawings are so detailed he uses a magnifying glass to do so! Each and every one of his drawings are filled with animals, plants and so on and it would take a long time to even see every single thing he drew into them. Dušan wants to be a zoologist and seeing the knowledge he has about all these animals I’d say he is gonna do alright.

And Artist Created These Images, But Not In The Way You Might Imagine. Let's take a moment to appreciate the creative work of Patrick Kramer. 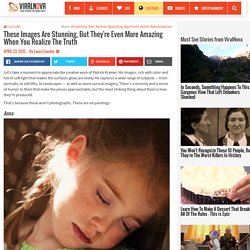 His images, rich with color and full of soft light that makes the surfaces glow, are lovely. He captures a wide range of subjects — from portraits, to still lifes, to landscapes — as well as more surreal imagery. There's a serenity and a sense of humor to them that make the pieces approachable, but the most striking thing about them is how they're produced.

That's because these aren't photographs. These are oil paintings. Anna. Life on Earth sur Twitter : "Artist Spent One Year In The Woods Creating Surreal Sculptures From Organic Materials. Fascinating Pictures sur Twitter : "7 of the coolest paintings that will break your sanity See here: . Photographer Dad Makes His Son With Down Syndrome Fly In Adorable Photo Series. The Amazing Art of Disabled Artists. Some of the best artists deal with disabilities in their everyday lives that the rest of us can’t even imagine living with, and use art to communicate with the world. 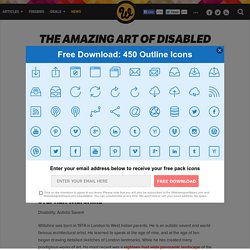 The results are often stunning. We’ve collected biographies and sample pieces from outstanding disabled artists, both famous and lesser-known. The artists below paint with their hands, their mouths and their feet. Many are blind or suffer from mental disabilities, yet they produce some of the most beautiful and intricate artwork that you can imagine. Their achievements are arguably epic in the face of the adversity that they face. We hope that the artists in this post inspire your designs and make you look at adversity in any field as a surmountable obstacle. Australian Artist John Piccoli Creates Sculptures Out Of Old Wrenches. John Piccoli is a 70 year-old man. 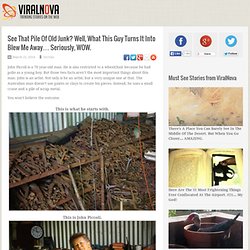 He is also restricted to a wheelchair because he had polio as a young boy. But those two facts aren’t the most important things about this man. John is an artist. Not only is he an artist, but a very unique one at that. The Australian man doesn’t use paints or clays to create his pieces. You won’t believe the outcome. This is what he starts with. This is John Piccoli.

And THIS is what he makes. Alain Laboile - La Famille. I’m a father of six. 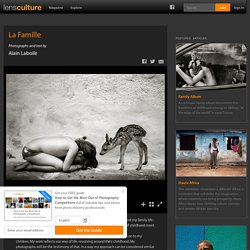 Through my photographic work I celebrate and document my family life : a life on the edge of the world, where intemporality and the universality of childhood meet. Most Awesome Web Photos. Dreamscapes by Ian Plant. Chris Norcott Photography. (7) Tin Man Photography. Timeline Photos - Michele Chartier. Jennifer Trask Sculpts Delicate Objects Out Of Bones. Artist Jennifer Trask counts bone as one of the media used in her elaborate sculptures. 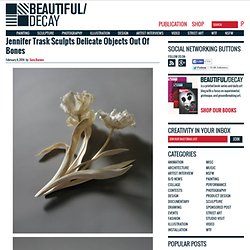 Bending, carving, and gilding, she constructs bouquets of antlers, gold, and other found objects, some dating as far back as the 18th century. There is a certain level of awe that comes from viewing these labored works as Trasks crafts delicate flowers out of material that we only know as being stiff and obtuse. She emphasizes craft, while at the same time making things ghostly realistic. Her work is described by the Lisa Sette Gallery as having “sprouted from an enchanted seed… Trask’s objects emit an unmistakable air of magic.” Miketaylorphoto. Mountain landscape and adventure photographer in Banff, Alberta. 'The Great Wall Of Vagina' Is, Well, A Great Wall Of Vaginas (NSFW) Warning: As the title suggests, this post is full of vaginal renderings. If you do not want to see a wall of labia, do not continue reading. We repeat, do not continue reading. UK-based sculptor Jamie McCartney has spent the better half of a decade creating hundreds of renderings of female genitalia.

In a project titled "The Great Wall of Vagina," the artist demonstrates not only his ability to craft effective word play, but also his knack for capturing the physical diversity of labia in a 30-foot polyptych. McCartney recruited around 400 women for the series of 10 panels, casting the vulvae of women aged 18 to 76. "This is about grabbing the attention, using humour and spectacle, and then educating people about what normal women really look like," "The Great Wall of Vagina" site states. This Is What Happens When You Freeze Bubbles. Ever wonder what happens to a bubble when it's exposed to extremely cold temperatures? Thanks to Washington-based photographer Angela Kelly, we have the answer. It turns out that the soapy orbs crystallize when faced with freezing temperatures from around nine to 16 degrees Fahrenheit, morphing into fragile, glass-like sculptures. Kelly photographed the results of her quirky experiment in a series of ethereal bubble shots, motivated by the power of simple curiosity.

Boeing: Starliner. History In Pictures sur Twitter : "I'm blown away by this woman. Chris Hadfield sur Twitter : "Pluto is surprisingly messy. This new photo just beamed back from the far edge of our understanding. Discovery sur Twitter : "#TBT to last year when Curiosity found that weird "ball" on Mars >> NASA sur Twitter : "Bright spots on dwarf planet #Ceres gleam with mystery in new, closest-yet @NASA_Dawn views: BBC Earth sur Twitter : ""These stars would be one way for alien life to spread from galaxy to galaxy." Douglas H. Wheelock sur Twitter : "Life's storms leave us tattered; #LookUp! Beyond the storms there is an endless sea of stars...