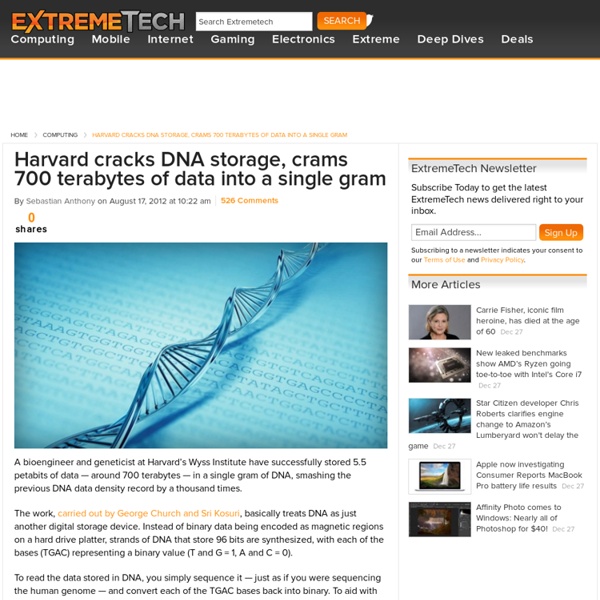 A bioengineer and geneticist at Harvard’s Wyss Institute have successfully stored 5.5 petabits of data — around 700 terabytes — in a single gram of DNA, smashing the previous DNA data density record by a thousand times. The work, carried out by George Church and Sri Kosuri, basically treats DNA as just another digital storage device. Instead of binary data being encoded as magnetic regions on a hard drive platter, strands of DNA that store 96 bits are synthesized, with each of the bases (TGAC) representing a binary value (T and G = 1, A and C = 0). To read the data stored in DNA, you simply sequence it — just as if you were sequencing the human genome — and convert each of the TGAC bases back into binary. To aid with sequencing, each strand of DNA has a 19-bit address block at the start (the red bits in the image below) — so a whole vat of DNA can be sequenced out of order, and then sorted into usable data using the addresses.

Hackers backdoor the human brain, successfully extract sensitive data With a chilling hint of the not-so-distant future, researchers at the Usenix Security conference have demonstrated a zero-day vulnerability in your brain. Using a commercial off-the-shelf brain-computer interface, the researchers have shown that it’s possible to hack your brain, forcing you to reveal information that you’d rather keep secret. As we’ve covered in the past, a brain-computer interface is a two-part device: There’s the hardware — which is usually a headset (an EEG; an electroencephalograph) with sensors that rest on your scalp — and software, which processes your brain activity and tries to work out what you’re trying to do (turn left, double click, open box, etc.) A Trip Through The Universe - “For You To Enjoy And Share With Friends” - Another trip through the Universe travelling at the speed of light. Again it gives you the perspective of actually tiy we are and how vast the Universe actually is. The Milky Way is a huge city of stars, so big that even at the speed of light, it would take 100,000 years to travel across it.

Black belts' white matter shows how a powerful punch comes from the brain Brain scans have revealed distinctive features in the brain structure of karate experts, which could be linked to their ability to punch powerfully from close range. Researchers from Imperial College London and UCL (University College London) found that differences in the structure of white matter – the connections between brain regions – were correlated with how black belts and novices performed in a test of punching ability. Karate experts are able to generate extremely powerful forces with their punches, but how they do this is not fully understood. Previous studies have found that the force generated in a karate punch is not determined by muscular strength, suggesting that factors related to the control of muscle movement by the brain might be important.

German student creates electromagnetic harvester that gathers free electricity from thin air A German student has built an electromagnetic harvester that recharges an AA battery by soaking up ambient, environmental radiation. These harvesters can gather free electricity from just about anything, including overhead power lines, coffee machines, refrigerators, or even the emissions from your WiFi router or smartphone. This might sound a bit like hocus-pocus pseudoscience, but the underlying science is actually surprisingly sound. We are, after all, just talking about wireless power transfer — just like the smartphones that are starting to ship with wireless charging tech, and the accompanying charging pads. Dennis Siegel, of the University of Arts Bremen, does away with the charging pad, but the underlying tech is fundamentally the same. The efficiency of wireless charging, however, strongly depends on the range and orientation of the transmitter, and how well the coil is tuned to the transmitter’s frequency.

5D optical memory in glass could record the last evidence of civilization Using nanostructured glass, scientists at the University of Southampton have, for the first time, experimentally demonstrated the recording and retrieval processes of five dimensional digital data by femtosecond laser writing. The storage allows unprecedented parameters including 360 TB/disc data capacity, thermal stability up to 1000°C and practically unlimited lifetime. Coined as the 'Superman' memory crystal, as the glass memory has been compared to the "memory crystals" used in the Superman films, the data is recorded via self-assembled nanostructures created in fused quartz, which is able to store vast quantities of data for over a million years. The information encoding is realised in five dimensions: the size and orientation in addition to the three dimensional position of these nanostructures. A 300 kb digital copy of a text file was successfully recorded in 5D using ultrafast laser, producing extremely short and intense pulses of light.

How Apple and Amazon Security Flaws Led to My Epic Hacking In the space of one hour, my entire digital life was destroyed. First my Google account was taken over, then deleted. Next my Twitter account was compromised, and used as a platform to broadcast racist and homophobic messages. And worst of all, my AppleID account was broken into, and my hackers used it to remotely erase all of the data on my iPhone, iPad, and MacBook.

Future - Science & Environment - Drake equation: How many alien civilizations exist? Are we alone? It is a question that has occupied mankind for centuries. Today, we live in an age of exploration, where robots on Mars and planet-hunting telescopes are beginning to allow us to edge closer to an answer. While we wait to establish contact, one technique we can use back on Earth is an equation that American astronomer Frank Drake formulated in the 1960s to calculate the number of detectable extraterrestrial civilizations may exist in the Milky Way galaxy. It is not a rigorous equation, offering a wide range of possible answers. Instead it is more a tool used to help understand how many worlds might be out there and how those estimates change as missions like Kepler, a telescope that is currently searching for Earth-like planets, begin to discover more about our universe.

Bonobo genius makes stone tools like early humans did - life - 21 August 2012 Video: Watch this bonobo go to all ends to get food Kanzi the bonobo continues to impress. Not content with learning sign language or making up "words" for things like banana or juice, he now seems capable of making stone tools on a par with the efforts of early humans. Eviatar Nevo of the University of Haifa in Israel and his colleagues sealed food inside a log to mimic marrow locked inside long bones, and watched Kanzi, a 30-year-old male bonobo chimp, try to extract it.

Dropbox in Space! Dropbox / 18 Comments Posted by Drew Houstonon April 09, 2014 Today, we launched Mailbox for Android, turned on new Dropbox for Business features, and introduced the world to Carousel, our new gallery app. These experiences are just a first step towards making Dropbox a home for life. And today, we’re thrilled to announce three amazing additions to our leadership team to help us get there. We’re thrilled to promote Sujay Jaswa to be our CFO. Sujay was our first business executive, and has created and led the business side of Dropbox since joining in 2010. Scientists Confirm that Plants Talk and Listen To Each Other, Communication Crucial for Survival When a South African botanist Lyall Watson claimed in 1973 that plants had emotions that could be recorded on a lie detector test, he was dismissed by many in the scientific community. However, new research, published in the journal Trends in Plant Science, has revealed that plants not only respond to sound, but they also communicate to each other by making "clicking" sounds. Using powerful loudspeakers, researchers at The University of Western Australia were able to hear clicking sounds coming from the roots of corn saplings. Researchers at Bristol University also found that when they suspended the young roots in water and played a continuous noise at 220Hz, a similar frequency to the plant clicks, they found that the plants grew towards the source of the sound. "Everyone knows that plants react to light, and scientists also know that plants use volatile chemicals to communicate with each other, for instance, when danger - such as a herbivore - approaches," Dr.

Sacrificing sleep to study can lead to academic problems Regardless of how much a high school student generally studies each day, if that student sacrifices sleep in order to study more than usual, he or she is more likely to have academic problems the following day. Because students tend to increasingly sacrifice sleep time for studying in the latter years of high school, this negative dynamic becomes more and more prevalent over time. Those are the findings of a new longitudinal study that focused on daily and yearly variations of students who sacrifice sleep to study. The research was conducted at the University of California, Los Angeles (UCLA) and appears in the journal Child Development. "Sacrificing sleep for extra study time is counterproductive," says Andrew J.

Poor man's MSOP soldering MSOP stands for Mini Small Outline Package, that means that width of 4 leads is just 2mm, exactly the width of a row in a stripboard... Let see how can we solder that though. On a piece of wood we tape carefully 4 thin wires. We start my taping one wire and then taping again a second one at a distance of 2mm, take as much time as you need, this step is crucial, place on top the MSOP to make sure they have the right separation. If you need to make any adjustments use the blade of a cutter to move the wire. Good now you have the top one and the lower one.