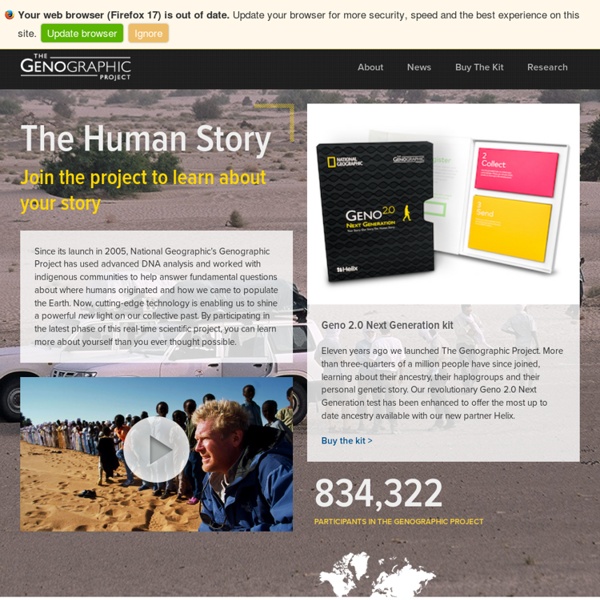 Decoded: The Mystery of Human Migration - Science - News Click here to see the graphic 'The maternal journey of OF mitochondrial DNA' Half a million people from around the globe are participating in an ambitious project to reconstruct some of the ancient migratory routes that took Homo sapiens from their ancient African homelands to the relatively new territories of Asia, Europe, Oceania and America. Hidden within the genetic makeup of people alive today is the encoded story of how their ancient ancestors made this epic journey, which covered many thousands of miles over many tens of thousands of years to complete. The Genographic Project, a landmark study into ancient human migrations, aims to decode these hidden signposts within our DNA. Human palaeontology, the study of ancient remains, suggests that the species Homo sapiens originated in Africa, probably East Africa, about 200,000 years ago, but it was only about 60,000 years ago that anatomically modern humans began their long and arduous journey out of Africa. Indigenous tribes Paul Nurse

World's oldest known fossils found in Greenland push evidence for life back by 220 million years - Science News Updated The oldest fossils known to date have been discovered in 3.7 billion-year-old rocks in Greenland by an Australian-led team of researchers. Key points Evidence of ancient bacterial communities known as stromatolites uncovered in rocks in GreenlandDating of rock above and below stromatolites places them between 3.7 and 3.68 billion years oldAnalysis pushes back earliest known evidence of life on Earth by 220 million years The discovery of the fossilised bacterial communities, known as stromatolites, could be the first clear biological evidence of the earliest known life on Earth, according to a paper published today in Nature. Before this find, the earliest accepted evidence for life were 3.48 billion-year-old fossil stromatolites from the Pilbara region in Western Australia. Lead author Professor Allen Nutman of the University of Wollongong has been investigating ancient rock formations in the Isua Supercrustal Belt in south-west Greenland for more than 30 years.

Competition between brain cells spurs memory circuit development Scientists at the University of Michigan Health System have for the first time demonstrated how memory circuits in the brain refine themselves in a living organism through two distinct types of competition between cells. Their results, published today in Neuron, mark a step forward in the search for the causes of neurological disorders associated with abnormal brain circuits, such as Alzheimer’s disease, autism and schizophrenia. “Much of our understanding of the brain’s wiring has come from studying our sensory and motor systems, but far less is understood about the mechanisms that organize neural circuits involved in higher brain functions, like learning and memory,” says senior author Hisashi Umemori, M.D., Ph.D., assistant research professor at U-M’s Molecular and Behavioral Neuroscience Institute and assistant professor of biological chemistry at the U-M Medical School. Brain cells grow and extend along pathways to link different parts of the brain, Umemori explains.

Human Journey Everybody loves a good story, and when it's finished, this will be the greatest one ever told. It begins in Africa with a group of hunter-gatherers, perhaps just a few hundred strong. It ends some 200,000 years later with their six and a half billion descendants spread across the Earth, living in peace or at war, believing in a thousand different deities or none at all, their faces aglow in the light of campfires and computer screens. In between is a sprawling saga of survival, movement, isolation, and conquest, most of it unfolding in the silence of prehistory.

Did early campfires trigger the emergence of tuberculosis? - Science News Posted Fire brought warmth and comfort to early humans but may also have triggered the emergence of deadly tuberculosis, Australian researchers suggest. Key points Tuberculosis first emerged in humans in Africa then spread to animalsMystery about how a benign microorganism became a killerHypothesis suggests fire increased human interaction and smoke made lungs more susceptible to disease Smoke-damaged lungs, as well as the closeness of humans around a campfire, could have created the ideal conditions for tuberculosis to mutate from a harmless soil bacterium into our number one bacterial killer, according to the researchers' data model. The model, published today in the Proceedings of the National Academy of Sciences, showed controlled use of fire would have increased the likelihood of tuberculosis emerging by several orders of magnitude. The rise of tuberculosis While the date of the earliest use of fire is also subject to debate, Dr Tanaka suggested that it probably came before tuberculosis.

Aluna the Movie | Homepage Early Human Migration" No historical record exists that tracks the migratory patterns of the earliest humans. Scientists piece together the story of human migration by examining the tools, art and burial sites they left behind and by tracing genetic patterns. They accomplish this by looking at mitochondrial DNA (mtDNA), which is passed from a mother to her offspring without being blended with the genetic code of the father. Examining mtDNA is useful for another reason -- it accumulates mutations relatively quickly. Early Migration Routes When humans first left Africa, they followed the coasts, where resources were abundant. The icy conditions at the time also helped expand early humanity's territory. There have long been competing theories that early humans crossed the Atlantic Ocean, either from Africa to South America or the Caribbean, or from Europe to Greenland to North America. The initial spread of humanity across the Earth was driven primarily by food and climate.

World-first genome study reveals rich history of Aboriginal Australians - Science News The most comprehensive genomic study of Indigenous Australians to date has revealed modern humans are all descendants of a single wave of migrants who left Africa about 72,000 years ago. Key points Key points Aboriginal and Papuan ancestors left Africa around 72,000 years agoArrived on supercontinent 'Sahul' around 50,000 years agoBy 31,000 years ago, most Aboriginal communities were genetically isolated from each other, giving rise to great genetic diversity It confirms modern Aboriginal Australians are the descendants of the first people to inhabit Australia — a claim that has previously been the subject of debate. And the genetic information also shows Aboriginal people living in desert conditions may have developed unique biological adaptations to survive the arid conditions. The findings are contained in one of three papers published today in Nature that look at the dispersal of modern humans from our evolutionary birthplace in Africa to Europe, Asia and Oceania.

Molecular and Integrative Physiology (PIBS), Rackham Graduate School, University of Michigan Details The Program in Biomedical Sciences at the University of Michigan is an interdisciplinary gateway program that coordinates admissions and the first year of Ph.D. studies for 14 department programs, including Molecular and Integrative Physiology. PIBS offers you the flexibility and convenience of applying to any of our participating programs through one application. Program Overview The Department of Physiology was established over 125 years ago and is among the oldest physiology departments in the country. Our department has a storied history and a strong tradition for outstanding leadership in teaching, research and graduate education. MIP has 25-30 Ph.D. students and some 66 faculty, including joint appointees. Faculty Program Director Scott Pletcher, Ph.D. Faculty Everything we do is geared toward an interdisciplinary approach to research, one that fosters collaboration and innovation among our outstanding faculty and students. Degree Programs Strong candidates will possess: