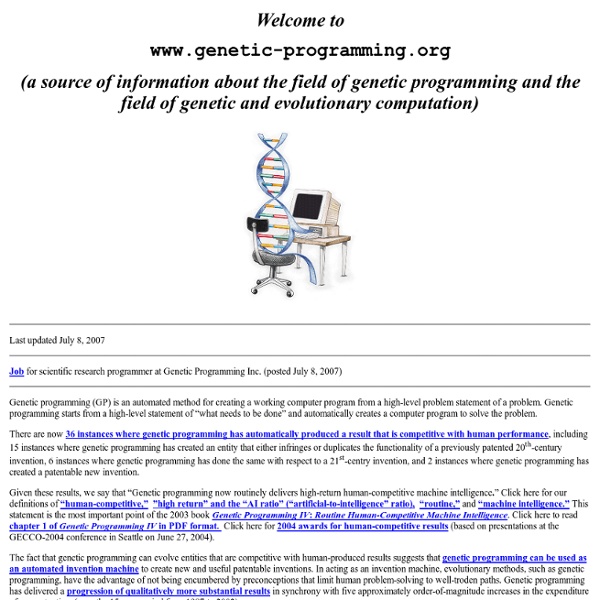 genetic-programming.com-Home-Page Acquired traits can be inherited via small RNAs Columbia University Medical Center (CUMC) researchers have found the first direct evidence that an acquired trait can be inherited without any DNA involvement. The findings suggest that Lamarck, whose theory of evolution was eclipsed by Darwin's, may not have been entirely wrong. The study is slated to appear in the Dec. 9 issue of Cell. "In our study, roundworms that developed resistance to a virus were able to pass along that immunity to their progeny for many consecutive generations," reported lead author Oded Rechavi, PhD, associate research scientist in biochemistry and molecular biophysics at CUMC. In an early theory of evolution, Jean Baptiste Larmarck (1744-1829) proposed that species evolve when individuals adapt to their environment and transmit those acquired traits to their offspring. However, some evidence suggests that acquired traits can be inherited. Dr. RNAi is triggered by doubled-stranded RNA (dsRNA), which is not found in healthy cells.

Examining the Society of Mind To appear in the journal Computing and Informatics. Push Singh 28 October 2003 push@mit.edu Media Lab Massachusetts Institute of Technology 20 Ames Street Cambridge, MA 02139 United States Abstract This article examines Marvin Minsky's Society of Mind theory of human cognition. The functions performed by the brain are the products of the work of thousands of different, specialized sub-systems, the intricate product of hundreds of millions of years of biological evolution. What is the human mind and how does it work? In seeking answers to these questions, Minsky does not search for a 'basic principle' from which all cognitive phenomena somehow emerge, for example, some universal method of inference, all-purpose representation, or unifying mathematical theory. Minsky introduces the term agent to refer to the simplest individuals that populate such societies of mind. This article examines the Society of Mind theory. The following essay was written by Scott Fahlman (in 1974 or 1973? K-lines.

From gene to function: Genome wide study into new gene functions in the formation of platelets In a study into the genetics of blood cell formation, researchers have identified 68 regions of the genome that affect the size and number of platelets. Platelets are small cells that circulate in the blood and are key to the processes of blood clotting and wound healing. In this genome-wide study, the team used a multidisciplinary approach to successfully identify new genetic variants involved in the formation of platelets and more importantly, defined the function of genes near these variants using a series of biological analyses. Abnormally high or low platelet counts can lead to disease. An increase in the number of platelets, or an increase in their size can lead to an increased risk for thrombotic events, like heart attacks and strokes. In this collaborative study, the team first developed a prioritisation strategy that allowed them to identify and pinpoint the genes underlying the formation of platelets through biological annotations of these genes.

Complex Systems BGI MILLIONAIRE'S ISLAND: A Simple Example Of Why 'Rich People' Don't Create Jobs wikipedia commons An unspoiled wilderness with no poor people. Paradise! As everyone in this country keeps blaming everyone else for our high unemployment rate, one assertion gets repeated so often that it is now regarded as fact: Rich people create jobs. Specifically, the argument goes, entrepreneurs and investors create jobs. So if we want to create more jobs, the argument continues, we need to cut taxes on entrepreneurs and investors--to increase their incentive to create jobs. Now, I'm an entrepreneur, and Business Insider employs about 75 people, up from zero four years ago. Unfortunately, as I explained in detail here, this assertion is wrong: Entrepreneurs and investors actually don't create jobs, at least not by themselves. Without our generous readers and sponsors and dedicated team, all the jobs I "created" at BI would immediately cease to exist (including mine). To illustrate this, let's run through a simple example. Let's allow the 1% to take their savings with them. wikipedia