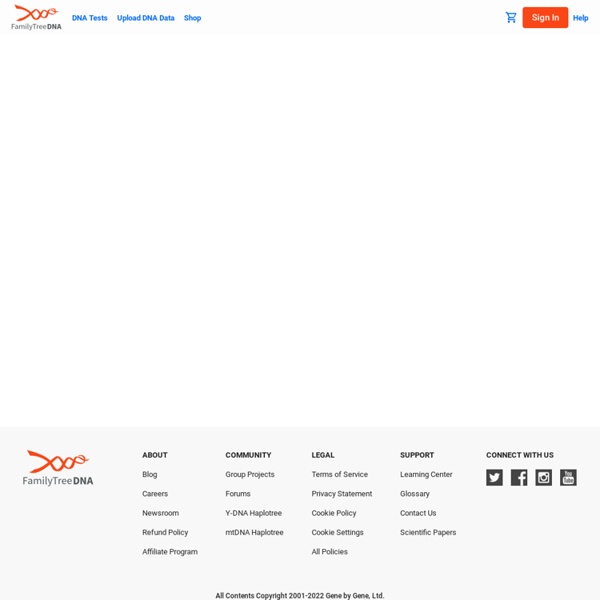 Famous faces linked by Y-DNA haplogroups - Abroad in the Yard Y-DNA haplogroups, which link son-to-father back to common male-line ancestors, have been determined for many notable figures – either from the direct testing of their DNA (whether they are dead or alive), or inferred from the testing of their male relatives and descendants. The results are not necessarily foolproof and are open to improvement by further research, but they show some fascinating and unexpected linkages. E1b1 Haplogroup E1b1 likely originated in the highlands of Ethiopia in East Africa, and diverged into two subclades, E1b1a and E1b1b, around 26,000 years ago.

About the Genographic Project - National Geographic Your results are just the beginning. By regularly visiting the Genographic Project website at www.genographic.com, you can find out much more as Genographic scientists pull together connections, uncover new paths, and provide fresh insights into your ancestry. You’ll find informative graphics, interactive features, video, and news stories, and learn about the broader historical context of your results. If you choose to create a personal profile at www.genographic.com, you can share your story with Genographic Project participants, gain further insight into your lineages, and connect with others around the world who share your deep ancestry. ENCODE Project at UCSC 12 Sept 2013 - New UDR ENCODE Download Method Available The UCSC Genome Browser is pleased to offer a new download protocol to use when downloading large sets of files from our download servers: UDR (UDT Enabled Rsync). UDR utilizes rsync as the transport mechanism, but sends the data over the UDT protocol, which enables huge amounts of data to be downloaded more efficiently over long distances. Read more. 25 July 2013 - BLUEPRINT Epigenome Data Hub and Quick Reference PDF Now Available

DNA Test Kit Click here for instructions on how to use your test kit. Watch a video on how to use our kit. The Family Tree DNA test kit consists of two cotton 'toothed' swab kits---designed for a single persons use. Each tube contains a fluid designed to arrest bacteria growth, so you can scrape your cheek and return your kit in any type of weather (hot or cold). The freshness of your sample will remain intact for months. Remember, a good scrape produces lots of DNA.

Becoming Human: Series Overview Becoming Human – Hour 2 PBS Airdate: November 10, 2009 NARRATOR: Humans: without a doubt, the smartest animal on Earth. Yet we're unmistakably tied to our ape origins. Millions of years ago, we were apes, living ape lives in Africa. So how did we get from that to this?

Customer Sign In We encourage you to search for a family surname in our SURNAMES DATABASE. Our database contains family names of clients who have already ordered a DNA profile from Family Tree DNA. After you have searched for the surname that interests you, the name will appear in the result screen with a number after the name, e.g.

Social Psychological Phenomena: Granfalloons etc. ...attribute the statement to Nostradamus and the dynamics change. Nostradamus was a man who supposedly cured plague victims, predicted who would be pope, foretold the future of kings and queens, and even found a poor dog lost by the king's page (Randi 1993). Such a great seer and prophet can't be wrong. ENCODE and modENCODE Projects The ENCODE Project: ENCyclopedia Of DNA Elements Follow the ENCODE Project on: ENCODE Overview The National Human Genome Research Institute (NHGRI) launched a public research consortium named ENCODE, the Encyclopedia Of DNA Elements, in September 2003, to carry out a project to identify all functional elements in the human genome sequence. The project started with two components - a pilot phase and a technology development phase. The pilot phase tested and compared existing methods to rigorously analyze a defined portion of the human genome sequence (See: ENCODE Pilot Project).

Genetics of Addiction Genetics: the blueprint of health and disease The International HapMap Project has identified 3.1 million single nucleotide polymorphisms (SNPs). In some cases, these tiny differences in DNA sequence may increase susceptibility to, or confer resistance against, disease, (U.S. Fragrant Flashbacks Memory and smell are intertwined; it’s through memory that we learn to remember smells, and disorders that take away memory also take away the ability to distinguish scents. Some of this learning starts even before we are born, when fetuses learn about their mother’s preferences through the amniotic fluid. Flavor, like that described by Proust (see sidebar), is what happens when taste and smell come together. Technically, “taste” refers only to the senses that are associated with receptors on the tongue: sweet, sour, bitter, salty, and — some people argue — umami. “What everybody calls ‘smell’ is when you sniff through your nostrils to get an odorant.

Bradley Manning and the Future of Punishment Yeah! Kill the guy who revealed to the rest of America what lies their government had been keeping from them. I love how Americans are so ready to just string up the guy who finally pulled back the curtain on the horrific actions being taken in their name. You want to bitch about 'criticizing' president Karzai (whom Bush installed there) and then you say "The U.S. does not want to repeat its Cold War mistakes of aiding corrupt governments for political expediency. " in regards to Ecuador. "Is this embarrassing? personal genomics Dr Neeta Tailor is an anaesthetist working at the Royal Gwent Hospital in Wales. Dr Tailor recently treated a friend of Genomes Unzipped members (referred to here as Patient X) who required emergency surgery following some unusual and fairly horrible complications (believe me, I’ve seen the photos!) from wisdom tooth removal.

Intelligence: Molecular Diagnostics Publications Analysis Enal Razvi, Ph.D., conducted his doctoral work on viral immunology and subsequent to receiving his Ph.D. went on to the Rockefeller University in New York to serve as Aaron Diamond Post-doctoral fellow under Professor Ralph Steinman [Nobel Prize Winner in 2011 for his discovery of dendritic cells in the early-70s with Zanvil Cohn]. Subsequently, Dr. Razvi completed his research fellowship at Harvard Medical School. A Natural History of the Senses, by Diane Ackerman Smell Smell is a potent wizard that transports us across thousands of miles and all the years we have lived. The odors of fruits waft me to my southern home, to my childhood frolics in the peach orchard. Other odors, instantaneous and fleeting, cause my heart to dilate joyously or contract with remembered grief. Even as I think of smells, my nose is full of scents that start awake sweet memories of summers gone and ripening fields far away.