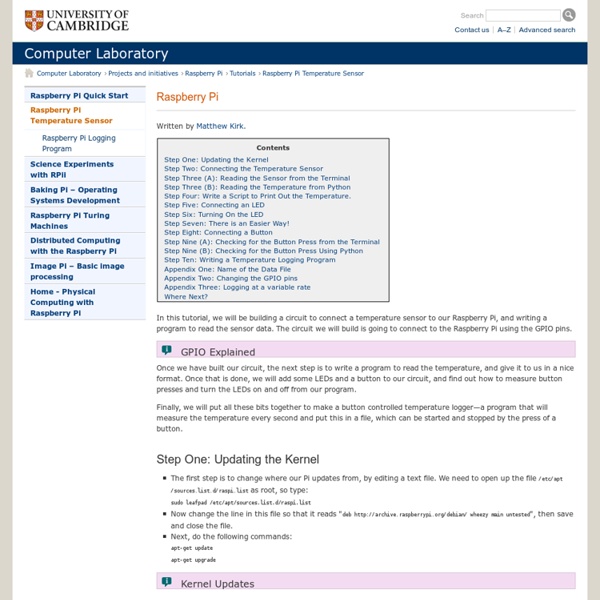 In this tutorial, we will be building a circuit to connect a temperature sensor to our Raspberry Pi, and writing a program to read the sensor data. The circuit we will build is going to connect to the Raspberry Pi using the GPIO pins. GPIO stands for General Purpose Input/Output. General purpose because all they are is simple connections that can be either high or low, a binary choice. This means we can easily do things that involves binary choices, and it will still be nice and simple to understand what is going on. In this tutorial, we are going to be turning LEDs off and on, and checking whether buttons are being pressed—all very binary actions, which makes them ideally suited for GPIO pins. However, this is not all that GPIO pins can be used for. Once we have built our circuit, the next step is to write a program to read the temperature, and give it to us in a nice format. Step One: Updating the Kernel The first step is to change where our Pi updates from, by editing a text file.

RPI - HDMI config.txt As the Raspberry Pi doesn't have a conventional BIOS, the various system configuration parameters that would normally be kept and set using the BIOS are now stored in a text file named "config.txt". The Raspberry Pi config.txt file is read by the GPU before the ARM core is initialized. This file is an optional file on the boot partition. It would normally be accessible as /boot/config.txt from Linux, but from Windows (or OS X) it would be seen as a file in the accessible part of the card. Free online course on building a simple Raspberry Pi OS from the University of Cambridge This summer, the University of Cambridge Computer Lab has been home to a small group working on projects with the Raspberry Pi. Alex Chadwick is one of those people, and he’s produced this: a free course on building a very simple operating system for the Raspberry Pi in assembly language. The course opens with some explanations about what assembly language is – and, importantly, what an operating system really is; you’ll learn some new concepts and possibly some new terms, and then you’ll dive headlong into practical work. You will work through sessions which teach you how to enable and manipulate one of the board’s LEDs, then learn some graphics theory and start generating lines, text and random numbers.

Raspberry Pi Temperature Server The Raspbian Linux distribution for the Raspberry Pi includes some useful kernel drivers for accessing devices connected to the Pi’s GPIO pins. Based on the tutorial from the University of Cambridge Computer Laboratory I’ve been playing around with the DS18B20 digital thermometer on the Pi. I’ve connected the sensor to the Pi using a standard electronics breadboard and the excellent Adafruit Pi Cobbler breakout connector kit (kudos to Mills for her excellent soldering skills). A Raspberry Pi controlled mini CNC Laser engraver [keep updating] I recently made a mini CNC laser engraver using two DVD drives salvaged from old computers and <$10 extra parts bought on eBay. The controller of the CNC machine is a Raspberry Pi, a $35 credit card size computer. The engraver turns out to be pretty successful.

How to Customize XBMC 12 Frodo with All the Bells and Whistles Kodi (formerly known as XBMC) is a great entertainment center software. But, here’s the deal: Like many other open source projects, it is driven by a very technical community, and it is not necessarily user-friendly enough for the average person to use and customize. TMP006 Temperature Sensor Python Library Are you looking for an easy way to measure the temperature of something without having to attach a sensor directly to it? Consider using a non-contact temperature sensor like the TMP006! This sensor reads the infra-red radiation, or heat, emitted from an object and can be easily read over an I2C connection. With the TMP006 Python library you can now use the TMP006 non-contact temperature sensor with your Raspberry Pi or BeagleBone Black project!

RPi Adding USB Drives USB Flash and Hard Drives Sooner or later, you're going to run out of room on the SD card used to boot and run your Pi. One solution is to move to a larger SD card, but, the largest low-cost high-speed cards are 32 GBs for about US$20 ~ $45 (May 2012). However, there may be compatibility issues between these higher-capacity SD cards and the Pi, at least, temporarily. Support for GPIO-driven interrupts maddin1234 wrote:Ok, perhaps MY process is sleeping, but then POLL has to run to thedoor and wake me up when someone is there.I didn't have a look into poll.c, but from the name I guess it is polling. poll(), and the similar select(), are the standard system calls for checking and/or waiting for one or more files to become ready for I/O. With a timeout value of zero, poll() simply checks whether each of the files is in the requested state and returns immediately.

Python and Raspberry Pi Temperature Sensor DeviceHive is powerful and yet easy. To make it even easier to understand, let’s take this simple example of the fun project that you can build in just a few hours. How about building a remote temperature sensor and a remotely controlled LED? This can be a very good starting point to built from. it involves replacing LED with power relay and controlling light in your room, adding humidity sensors and, say, light sensors to better monitor the environment and report everything on your mobile device. RPi VerifiedPeripherals Back to the Hub. Hardware & Peripherals: Hardware and Hardware History. Low-level Peripherals and Expansion Boards. Raspberry Pi WiringPi provides some helper functions to allow you to manage your program (or thread) priority and to help launch a new thread from inside your program. Threads run concurrently with your main program and can be used for a variety of purposes. To learn more about threads, search for “Posix Threads” Program or Thread Priority int piHiPri (int priority) ; This attempts to shift your program (or thread in a multi-threaded program) to a higher priority and enables a real-time scheduling.

MCP9808 Temperature Sensor Python Library To install and use the MCP9808 Python library follow the steps below. Before you get started make sure your board is connected to the internet through an ethernet or wireless connection so you can download dependencies. You'll also want to be familiar with connecting to a Raspberry Pi or BeagleBone Black terminal with SSH. First install dependencies by executing in a terminal: sudo apt-get update sudo apt-get install build-essential python-dev python-pip python-smbus git sudo apt-get updatesudo apt-get install build-essential python-dev python-pip python-smbus git