Plumeliddell. About Us. Who We Are B-Word Worldwide, doing business as Bitch Media, is the nonprofit organization best known for publishing the magazine Bitch: Feminist Response to Pop Culture. 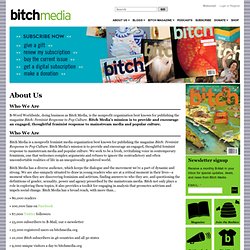 . • 80,000 readers • 100,000 fans on Facebook • 67,000 Twitter followers The Magazine. 10 Kick-Ass Secret Passage Bookshelves. If there’s one dream that unites all bookish folks (aside from, you know, universal literacy) it’s the dream of having a secret passageway hidden behind a bookcase. 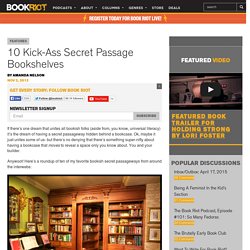 Ok, maybe it just unites some of us- but there’s no denying that there’s something super-nifty about having a bookcase that moves to reveal a space only you know about. You and your builder. Your Survival in BRC - Survival Guide. 1360016734 (2000×1789) Preparation. Driving to Burning Man from the Wormy Apple... 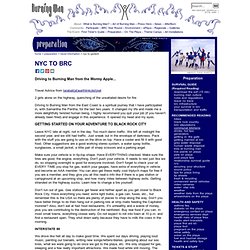 Travel Advice from taraball(at)earthlink(dot)net 2 girls alone on the highway, quenching of the unsatiated desire for fire Driving to Burning Man from the East Coast is a spiritual journey that I have participated in, with Samantha the Pantha, for the last two years. It changed my life and made me a more delightfully twisted human being.

I highly recommend you quit your job (if you haven't already been fired) and engage in this experience. Leave NYC late at night, not in the day. Make sure your vehicle is in tip-top shape. Don't run out of gas. We drove like hell all day to make good time. We generally stopped well after dark at campsites or RV lots. The best thing to do is watch your map and stop when it seems good, or when you are exhausted and the highway becomes a dull video game. I can't really say, “this was the greatest” about anything. Our favorite state was Wyoming. Black Rock City, Nevada 89412 - Google Maps!!! Did you know that Black Rock City actually has a post office? 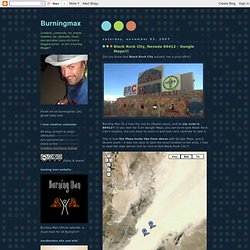 Burning Man IS a real city, not an Utopian place, and its zip code is 89412!!! If you look for it on Google Maps, you can even spot Black Rock City's location, but you have to zoom in and look very carefully to spot it. This is how the Playa looks like from above with Google Maps, and a decent zoom - it was not easy to spot the exact location in the area, I had to beat the map almost inch by inch to find Black Rock City!!! Then you give the zoom a last click, et voila' - ladies and gentlemen, geniouses and weirdos, here is Black Rock City in all its airview splendor! You actually get two Black Rock Cities in one shot - the South-western one is the previous location of Black Rock City, up to Burning Man 2004. You can zoom in a lot, and explore Black Rock City - this one below is a nice view from above centered at Center Camp, with the Esplanade and all.

Now you can ask Google Maps driving directions straight to Center Camp! Glossary of Science Fiction Ideas and Inventions. Is It A Book? A small History of the Book, or, how its Past relates to the Topic at Hand Some thoughts on Nonlinearity in Literature An Analysis of narrative in Comix, and the work of Alan Moore [new section, July 2005] Nonlinearity as it relates to Form and Function in the Book Arts A discussion of Dreams, Memory, and the Cinema Several amusing Tricks and Games, which Employ various aspects of Nonlinearity A discussion of the Possibilities for the Future of the Book in the present Electronic Age. 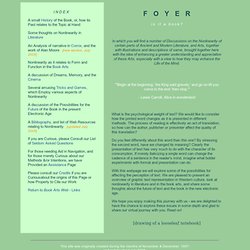 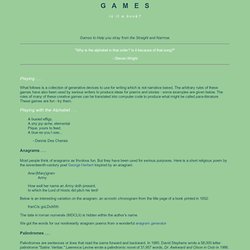 Games to Help you stray from the Straight and Narrrow. "Why is the alphabet in that order? Is it because of that song? " - Steven Wright Playing . . . What follows is a collection of generative devices to use for writing which is not narrative based. Playing with the Alphabet . . . Is It A Book? I s i t a b o o k ? 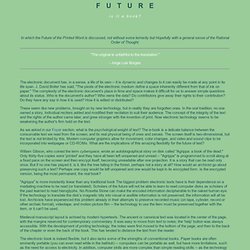 In which the Future of the Printed Word is discussed, not without some temerity but Hopefully with a general sense of the Rational Order of Thought. Literature. I s i t a b o o k ? 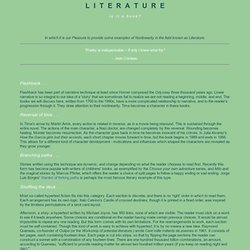 In which it is our Pleasure to provide some examples of Nonlinearity in the field known as Literature. "Poetry is indispensable -- if only I knew what for. " - Jean Cocteau Flashback . . . Flashback has been part of narrative technique at least since Homer composed the Odyssey three thousand years ago. Reversal of time . . . Decoration lessons learned from Burning Man. Sacred Couch, by Nico Aguilera It's been almost a decade since I made my final pilgrimage to Burning Man, the week-long arts festival in the Nevada desert that kicks off next week… but when I look around my house, I feel like I can still see influences of the Playa on my home. 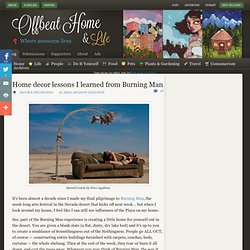 See, part of the Burning Man experience is creating a little home for yourself out in the desert. You are given a blank slate (a flat, dusty, dry lake bed) and it's up to you to create a semblance of Somethingness out of the Nothingness. People go ALL OUT, of course — constructing entire buildings furnished with carpets, couches, beds, curtains — the whole shebang. Then at the end of the week, they tear or burn it all down, and cart the mess away.