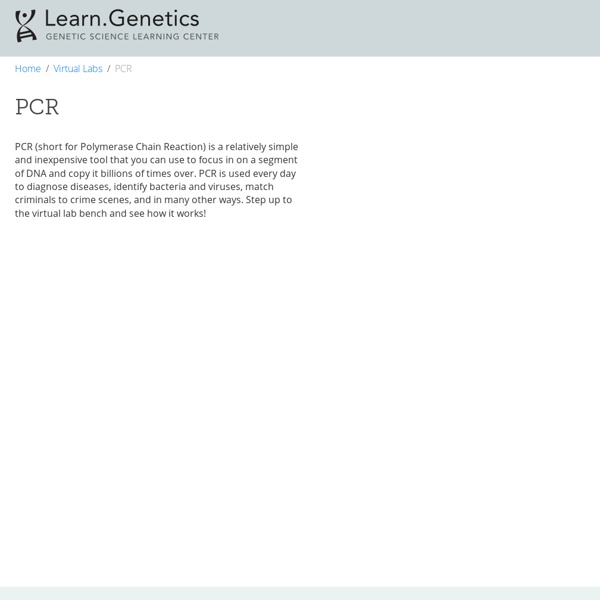 Primers are short pieces of DNA that are made in a laboratory. Since they're custom built, primers can have any sequence of nucleotides you'd like. In a PCR experiment, two primers are designed to match to the segment of DNA you want to copy. Through complementary base pairing, one primer attaches to the top strand at one end of your segment of interest, and the other primer attaches to the bottom strand at the other end. In most cases, 2 primers that are 20 or so nucleotides long will target just one place in the entire genome. Primers are also necessary because DNA polymerase can't attach at just any old place and start copying away. DNA Polymerase is a naturally occurring complex of proteins whose function is to copy a cell's DNA before it divides in two. The DNA polymerase in our bodies breaks down at temperatures well below 95 °C (203 °F), the temperature necessary to separate two complementary strands of DNA in a test tube.

The Biology Project: Cell Biology en español Cell Membranes Learn that membranes are fluid, with components that move, change, and perform vital physiological roles as they allow cells to communicate with each other and their environment. Cell Signaling Learn that living organisms constantly receive and interpret signals from their environment. Cells of multi-cellular organisms also receive signals from other cells, including signals for cell division and differentiation. DNA Forensics: The latest national and international news about DNA databases and forensic science Contact Professor Manfred Kayser from the Erasmus University Medical Center in Rotterdam, the Netherlands, and his colleagues have identified five candidate genes associated with different facial shapes - known as PRDM16, PAX3, TP63, C5orf50, and COL17A1. During a press conference in Drachten, in Friesland, a Northern province of The Netherlands, the public prosecution's office announced that approximately 8,000 men have been asked to provide DNA samples to help solve the 1999 murder of Marianne Va ... On August 24th, in Fort Worth, Texas, David Lee Wiggins, walked out of the courthouse accompanied by his attorney Nina Morrison, from the Innocence Project, his brother Duane Wiggins and sister Candy Berg. Wiggins was convicted and sentenced to life ... A new forensic technique called Hirisplex will soon allow investigators to predict certain physical characteristics of suspects, like their hair and eye color, after analyzing traces of DNA that were left at the crime scene.

Gene Delivery: Tools of the Trade Genes can be delivered into a group of cells in a patient's body in two ways. The first, called in vivo (in VEE-voh), is to inject the vector directly into the patient, aiming to target the affected cells. The second, called ex vivo (ex VEE-voh), is to deliver the gene to cells that have been removed from the body and are growing in culture. FISH pour le diagnostic préimplantatoire génétique This article describes the selection of suitable probes for single-cell FISH, spreading techniques for blastomere nuclei, and in situ hybridization and signal scoring, applied to pre-implantation genetic diagnosis (PGD) in a clinical setting. Date Published: 2/23/2011, Issue 48; doi: 10.3791/2570 Keywords: Medicine, Issue 48, Fluorescence in situ hybridization, Pre-implantation genetic diagnosis, PGD, Sex determination, Translocations, Chromosome aneuploidy Scriven, P. N., Kirby, T. L., Ogilvie, C.

Genetic map of Britain goes on display A genetic map of the British people has been produced by Oxford University researchers. It forms the centrepiece of their display at the Royal Society's free Summer Science Exhibition, which opens today. The remarkable thing about the map is how much people sharing similar gene variations cluster geographically. The groupings often appear to match the separate historical pasts of different areas of Britain, following ancient enmities or reflecting differences that we hold onto today about where in the country we come from. On the genetic map of Britain, Cornish people clustered separately from those from Devon, while the Scottish and Irish tended to share the same DNA markers. New Self-Cloning Lizard Found in Vietnam Restaurant {*style:<b>You could call it the surprise du jour: A popular food on Vietnamese menus has turned out to be a lizard previously unknown to science, scientists say. </b>*} What's more, the newfound is no run-of-the-mill reptile —the all-female species reproduces via cloning, without the need for male lizards. Single-gender lizards aren't that much of an oddity: About one percent of lizards can reproduce by parthenogenesis, meaning the females spontaneously ovulate and clone themselves to produce offspring with the same genetic blueprint. (Related: "Virgin Birth Expected at Christmas—By Komodo Dragon." ) "The Vietnamese have been eating these for time on end," said herpetologist L.

BBC Science - How does DNA testing work? 1 February 2013Last updated at 16:29 DNA testing is a powerful tool for identification and has many practical applications. Common uses include: Methods and protocols in molecular biology - GFP Applications Page designed by Wallace Marshall, Yale University. {*style:<b>Added: 28-Nov-1999 Hits: 982 Rating: 7.33 Votes: 3 [ Rate It ] </b>*} - Contains many molecular biology protocols as well as some Drosophila protocols.

Claire Woolterton 1981 murder: DNA led to Colin Campbell arrest 14 November 2013Last updated at 15:48 ET Claire Woolterton's body was found in Windsor in August 1981 A DNA match led to the arrest of a convicted killer in connection with the murder and mutilation of a teenage girl in 1981, a court has heard. Colin Campbell, 66, who is already serving a life sentence for the manslaughter of Deirdre Sainsbury, denies murdering Claire Woolterton.