New DNA test makes it easier to pinpoint identical twin responsible for a crime. DNA profiling (or genetic fingerprinting) has proved a revolutionary tool for forensic investigators as a means to identify potential suspects, exonerate the innocent and convict the guilty. 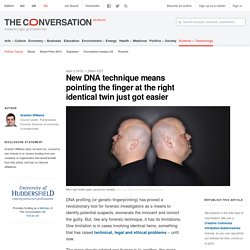 But, like any forensic technique, it has its limitations. One limitation is in cases involving identical twins, something that has raised technical, legal and ethical problems – until now. The more closely related one human is to another, the more similar their DNA profiles. DNA and case preparation. Some major changes in DNA technology and analysis have recently come on to the forensic scene – but with little fanfare to accompany those changes, busy practitioners could be forgiven for not having noticed them. 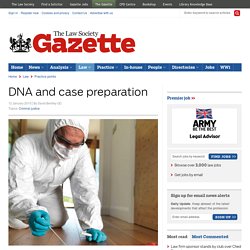 This article will set out those changes and go on to explore the challenges they can present to those who have to deal with DNA issues in criminal cases. The first, and the one which needs the closest scrutiny, is the adoption by DNA service providers (such as Cellmark and LGC) of computerised interpretation software to provide statistical evidence regarding contributors to complex DNA mixtures. The second is the general replacement of SGM Plus, the testing kit widely used for analysing DNA samples in this jurisdiction, with a new and more discriminating kit known as DNA17. The basics. The art of DNA folding.

View the video If packing a vacation’s worth of clothes into a small carry-on bag seems daunting, consider a cell’s task. 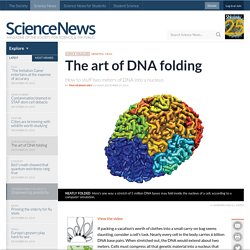 Nearly every cell in the body carries 6 billion DNA base pairs. When stretched out, the DNA would extend about two meters. Cells must compress all that genetic material into a nucleus that measures only about 5 micrometers across. High Court puts DNA and experts in their place. The Mabo case legal team: solicitor Greg McIntyre, barrister Ron Castan, Eddie Mabo and barrister Bryan Keon-Cohen at the High Court of Australia 1991. 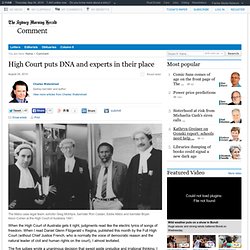 When the High Court of Australia gets it right, judgments read like the electric lyrics of songs of freedom. When I read Daniel Glenn Fitzgerald v Regina, published this month by the Full High Court (without Chief Justice French, who is normally the voice of democratic reason and the natural leader of civil and human rights on the court), I almost levitated. The five judges wrote a unanimous decision that swept aside prejudice and irrational thinking. I wanted to break into song, "We shall overcome, We shall overcome, One day! " The Fitzgerald judgment indeed reads like a freedom song. Where Genes Come From. In today’s New York Times, I’ve written a story about a simple but important question: where do new genes come from? 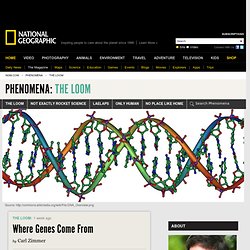 Some four billion years ago, when cellular life emerged, a typical primordial microbe likely had only a small set of genes. Today, however, genes abound. We, for example, have 20,000 genes that encode proteins. Dogs have their own set, and so do starfish and fireflies and willow trees and every other species on Earth. Somehow, in all that time, evolution produced a lot of new genes. But there are other ways. Sir Alec Jeffreys and DNA Fingerprinting. It has reunited a mother with her two-month-old son separated in the Boxing Day tsunami, given freedom to an innocent man on death row, and returned the remains of September 11 victims to their families. 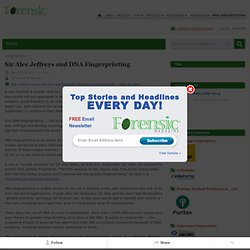 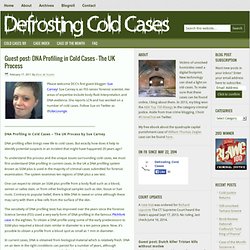 Sue Carney is an FSS senior forensic scientist. Her areas of expertise include body fluid interpretation and DNA evidence. She reports LCN and has worked on a number of cold cases. Follow Sue on Twitter as @LilacLounge.

Personal Genomics. ENCODE. Gender. Fgene.2014. The use of results of DNA analyses in the legal process is a highly ambivalent topic. 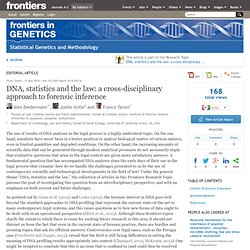 On the one hand, scientists have never been in a better position to analyse biological matter of various natures, even in limited quantities and degraded conditions. On the other hand, the increasing amounts of scientific data that can be generated through modern analytical processes do not necessarily imply that evaluative questions that arise in the legal context are given more satisfactory answers. Background DNA levels on child skin. Kercher trial: How does DNA contamination occur? 30 January 2014Last updated at 16:54 ET By Melissa Hogenboom Science reporter, BBC News Potential for the contamination of forensic DNA evidence has been highlighted by the Meredith Kercher murder trial. 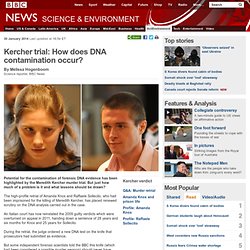 But just how much of a problem is it and what lessons should be drawn? Sex with Neandertals Introduced Helpful and Harmful DNA into Modern Human Genome. Neandertal DNA survives in Asian and European people today. 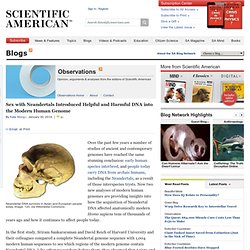 Image: 120, via Wikimedia Commons Over the past few years a number of studies of ancient and contemporary genomes have reached the same stunning conclusion: early human species interbred, and people today carry DNA from archaic humans, including the Neandertals, as a result of those interspecies trysts. Now two new analyses of modern human genomes are providing insights into how the acquisition of Neandertal DNA affected anatomically modern Homo sapiens tens of thousands of years ago and how it continues to affect people today.

In the first study, Sriram Sankararaman and David Reich of Harvard University and their colleagues compared a complete Neandertal genome sequence with 1,004 modern human sequences to see which regions of the modern genome contain Neandertal DNA. Like other researchers before them, they observed that Asians and Europeans have DNA from Neandertals, whereas Africans have little or no Neandertal DNA. Ancestry & SNPs-1. Is DNA analysis stuck in the past? A few weeks ago, the Innocence Project of New York (IP) announced that it had helped to release another innocent person from prison. This time it was Gerard Richardson. As The Verge outlined in September, Richardson was convicted of murdering a New Jersey woman in 1994 after a forensic odontologist concluded that the shape of Richardson’s jaw and the orientation of his teeth matched a bite mark on the murdered woman’s back.

After years of legal wrangling, IP was finally allowed to conduct a DNA test to double-check the odontologist’s conclusions. Their goal: to determine whether saliva swabbed from the bite mark in 1994 matched Richardson’s genetic makeup. It didn’t. Claire Woolterton 1981 murder: DNA led to Colin Campbell arrest. 14 November 2013Last updated at 15:48 ET Claire Woolterton's body was found in Windsor in August 1981 A DNA match led to the arrest of a convicted killer in connection with the murder and mutilation of a teenage girl in 1981, a court has heard. Colin Campbell, 66, who is already serving a life sentence for the manslaughter of Deirdre Sainsbury, denies murdering Claire Woolterton.

The 17-year-old's naked body was found by the River Thames on Barry Avenue in Windsor, Berkshire. Reading Crown Court heard she had been sexually assaulted and her throat cut. Opening the prosecution's case, Peter Wright QC described how Claire's mutilated body was found lying face down by a member of the public on 28 August, 1981.

Misreported statistics. Fbi-audit-of-database-that-indexes-dna-finds-errors-in-profiles. The , in a review of a national DNA database, has identified nearly 170 profiles that probably contain errors, some the result of handwriting mistakes or interpretation errors by lab technicians, while New York State authorities have turned up mistakes in DNA profiles in New York’s database. The discoveries, submitted by the New York City medical examiner’s office to a state oversight panel, show that the capacity for human error is ever-present, even when it comes to the analysis of DNA evidence, which can take on an aura of infallibility in court, defense lawyers and scientists said.

Watsoncrick.pdf. BBC Science - How does DNA testing work? 1 February 2013Last updated at 16:29 DNA testing is a powerful tool for identification and has many practical applications. Common uses include: Parental testing - to establish if someone is the biological parent of a child Forensic testing - to help identify suspects or victims in a criminal investigation Gene therapy - to test parents or foetuses for genetic conditions or birth defects Genetic genealogy - to find out more about someone's ancestry. Genetic map of Britain goes on display. A genetic map of the British people has been produced by Oxford University researchers.

It forms the centrepiece of their display at the Royal Society's free Summer Science Exhibition, which opens today. The remarkable thing about the map is how much people sharing similar gene variations cluster geographically. DNA Forensics: The latest national and international news about DNA databases and forensic science.

Contact Professor Manfred Kayser from the Erasmus University Medical Center in Rotterdam, the Netherlands, and his colleagues have identified five candidate genes associated with different facial shapes - known as PRDM16, PAX3, TP63, C5orf50, and COL17A1. DNA crime-fighting in UK 'lagging behind', experts say. PCR Virtual Lab. Primers are short pieces of DNA that are made in a laboratory. Since they're custom built, primers can have any sequence of nucleotides you'd like. In a PCR experiment, two primers are designed to match to the segment of DNA you want to copy.

Through complementary base pairing, one primer attaches to the top strand at one end of your segment of interest, and the other primer attaches to the bottom strand at the other end. In most cases, 2 primers that are 20 or so nucleotides long will target just one place in the entire genome. Primers are also necessary because DNA polymerase can't attach at just any old place and start copying away.