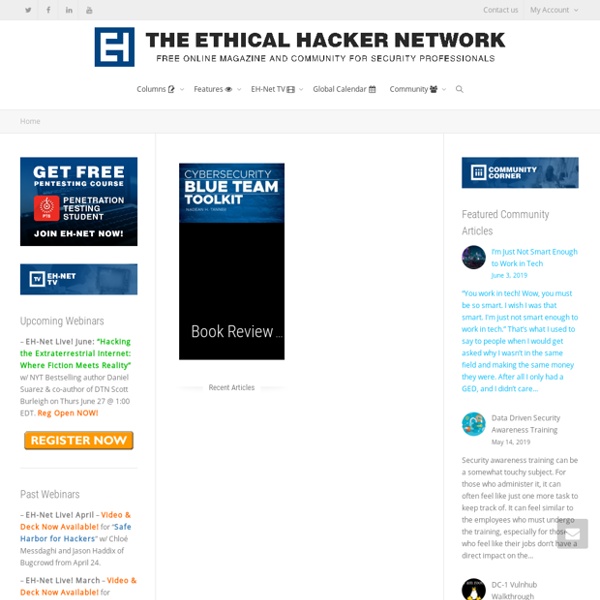 Winners of Free Hacking Courses at ShowMeCon 2014 Announced ShowMeCon 2014 in St. Louis is just around the corner on May 5 – 6 and includes a great speaker lineup featuring Dave Chronister, Adrian “IronGeek” Crenshaw, Wayne Burke, Jayson E. Street, John Matherly, Kevin Cardwell, Aamir Lakhani, Benoxa, Robert Reed, and Paul Coggin with keynotes by Evan “treefort” Booth, Andy Ellis, Ralph Echemendia and Raphael Mudge. ShowMeCon 2014 also features a CtF event as well as training courses to be held just before the event with coverage of Network Defense, CISSP, Forensics, Ethical Hacking, Intro to PowerShell, Security+ as well as a course on Advanced Mobile, WiFi and Network Hacking. The organizers of ShowMeCon 2014 were kind enough to offer Free Training Seats worth up to $6000 to top contributors.

Tech Insight: Making The Most Of Open-Source Forensics Tools Emerging offerings can turn network forensics into a low-cost, do-it-yourself security project A Special Analysis for Dark Reading Network forensic solutions come in many different shapes, sizes, and price ranges, but in the end they all have the same goal: recording activity on the network. As IT budgets tighten with the economy, it might be time for your organization to take a closer look at a do-it-yourself approach to forensics that leverages free and open-source tools. While your CFO might love the price of these tools, it may be difficult to "sell" them to your IT management. Most IT executives want someone to point a finger at when a product breaks, and many want 24x7 support.

Book Review: Digital Forensics with Open Source Tools With more forensic books hitting the shelves, I find myself prioritizing those by authors I know and trust. I have worked with Cory Altheide and he is an extremely talented forensic professional with a passion for open source tools. Not surprisingly, I would not categorize this as a beginner book. Open source tools require a higher level of interaction than their commercial counterparts, but are a great way to take your forensic skills to the next level. While teaching, I often see students frustrated that there is no one tool that can do it all. Such a tool does not exist, no matter how much you are able to pay for it.

Top 10 Web hacking techniques of 2010 revealed Network World - A Web hack that can endanger online banking transactions is ranked the No. 1 new Web hacking technique for 2010 in a top 10 list selected by a panel of experts and open voting. Called the Padding Oracle Crypto Attack, the hack takes advantage of how Microsoft's Web framework ASP.NET protects AES encryption cookies. FROM THE SECURITY WORLD: Quirky moments at Black Hat DC 2011 If encryption data in the cookie has been changed, the way ASP.NET handles it results in the application leaking some information about how to decrypt the traffic. With enough repeated changes and leaked information, the hacker can deduce which possible bytes can be eliminated from the encryption key. That reduces the number of unknown bytes to a small enough number to be guessed.

Forensic Tools Listings Pyext The ext3 or third extended filesystem is a journaled file system that is commonly used by the Linux kernel. It is the default file system for many popular Linux distributions. Stephen Tweedie first revealed that he was working on extending ext2 in Journaling the Linux ext2fs Filesystem in a 1998 paper and later in a February 1999 kernel mailing list posting, and the filesystem was merged with the mainline Linux kernel in November 2001 from 2.4.15 onward. This project is mainly to read EXT2/3 information.

List of digital forensics tools During the 1980s, most digital forensic investigations consisted of "live analysis", examining digital media directly using non-specialist tools. In the 1990s, several freeware and other proprietary tools (both hardware and software) were created to allow investigations to take place without modifying media. This first set of tools mainly focused on computer forensics, although in recent years similar tools have evolved for the field of mobile device forensics.[1] Computer forensics[edit] Memory forensics[edit] Memory forensics tools are used to acquire and/or analyze a computer's volatile memory (RAM).

The War On Cyber CyberTerrorists - The War On Cyber: CyberTerrorists - The War On Cyber Join us now to get access to all our features. Once registered and logged in, you will be able to create topics, post replies to existing threads, give reputation to your fellow members, get your own private messenger, and so, so much more. Subscribe to topics and forums to get automatic updates Netherlands Forensic Institute develops and publishes open source software The Netherlands Forensic Institute (NFI) recently published its own software, TULP2G, under an open source license. The NFI had already published a software library called Rfile as open source software. The software that was developed by the NFI can now be used and developed further by other organizations.

File Carving: Recover Data From Hard Drive, USB and CD-ROM When you erase a file on your computer, it doesn’t just disappear. The directory table is updated saying that the space used by the file is now able to be overwritten. But the file is still intact. Data recovery programs exist to “un-erase” these files. Now, what if your hard drive is damaged, the directory table is corrupt or you need to get data off of a CD-ROM, USB or iPhone? What if you could recover data from a drive without using the directory table at all? 50 Essential Open Source Security Tools - Anti-Everything, Encryption, Secure Delete, Forensics - Roundup Anti-Everything, Encryption, Secure Delete, Forensics November 11, 2008 By Cynthia Harvey The area of open source security software is growing rapidly, with a cornucopia of apps for every use: anti-spam, firewalls, forensics, encryption, log monitoring, passwords – the list is growing even as you read this. In many cases, these open source security tools – many of which are free – are available for the Windows, Linux and Mac operating systems. Let the downloading begin…